First published here on Thursday, May 13, 2010 By Ed Walens Gloucester City built its first Fire Department headquarters in 1879 on Bergen Street – where the police station is now. The fire hall was built on a lot adjacent to the old City Hall, which is now the new City Hall. After 1879, several fires took place without the knowledge of some firemen because there was no alarm bell to let them know. Some concerned Gloucester City businessmen decided to approach City Council and ask that a fire alarm bell be placed in the tower of the fire hall. The Councilmen liked the idea, and wasted no time planning for the installation of a fire alarm bell. They purchased a large bell that would be heard in every corner of the town. The alarm would be set off by electricity, and Council decided to put the bell in the... Read more →

By Joe Mueller | The Center Square (The Center Square) – Some veterans are waiting a year or more for a document from the federal government enabling them to receive services they’re entitled to, according to Pennsylvania Veterans Affairs administrators. “You would think – and this is just me saying this – in this day and age with our technological capabilities to produce scanned files of absolutely everything, we would be able to point and click and get somebody documents,” Allen Lockard, director of Indiana County Veteran Affairs, said in an interview with The Center Square. During testimony before the Pennsylvania Senate Urban Affairs and Housing Committee on Tuesday, Lockard said getting a veteran’s most essential document – a DD214 – from the National Personnel Records Center in St. Louis is taking at least a year. “If you withdraw more than $600 in this country, somebody knows it,” Lockard told... Read more →

Heather Reynolds of Sicklerville Found Guilty of Killing Her SON

CAMDEN CITY NJ (July 29, 2022)--Following a nine-day trial, a Camden County jury has convicted Heather Reynolds, 44, of murder and additional charges connected to the May 2018 death of her 17-month-old son, Camden County Prosecutor Grace C. MacAulay announced. On July 28, 2022, before Camden County Superior Court Judge Gwendolyn Blue, a jury returned a guilty verdict against Reynolds for murder, possession of methamphetamine and endangering the welfare of a child. “A lot of people worked very hard to get justice for this child. I’m grateful for their efforts and appreciate the time and attention that the jury gave this case,” said CCPO Homicide Section Chief Peter Gallagher who represents the state in this matter. On May 10, 2018, Gloucester Township Police Officersresponded to a report of an unresponsive child on a lawn near his residence, in Marcia Court, Sicklerville, in Gloucester Township. The child was pronounced deceased a... Read more →

Wawa Station to Open Aug. 21 MIDDLETOWN TOWNSHIP, DELAWARE COUNTY (July 27, 2022) – SEPTA’s newest Regional Rail station will bear the name of a hometown institution thanks to a naming rights agreement announced today. The new Wawa Station will officially open for service on Sunday, August 21. This announcement represents an important milestone for SEPTA’s multi-year project to restore more than 3.5 miles of Regional Rail service west of Elwyn to the new Wawa Station. SEPTA trains last served this area in 1986. The Media/Elwyn Regional Rail Line will now be called the Media/Wawa Line to reflect the new terminus of service. The partnership with Wawa is SEPTA’s fifth major naming rights agreement since 2010. As with the other agreements, this collaboration will further SEPTA’s commitment to generating new sources of revenue, which is critical to ensure the Authority can continue to recover from the pandemic. “With this station... Read more →

If A Nuclear Bomb Was Dropped on Philadelphia What would happen to New Jersey? 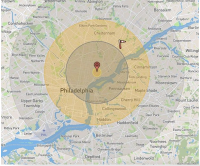 image courtesy of Nukemap GLOUCESTER CITY, NJ (JULY 31, 2022)(CNBNewsnet)--With all this talk of a war between the United States with China or Russia, one has to wonder what would happen here in Southern New Jersey if a nuclear bomb was dropped on the City of Philadelphia the largest metropolitan city in the Delaware Valley. To answer that question wpgtalkradio.com/ used NUKEMAP by Alex Wellerstein to see what would happen if a nuclear warhead hit New York, Philadelphia, Washington or New Jersey. The models show what would happen in aerial detonation, meaning the bomb would be set off in the sky, causing considerable damage to structures and people below; or what would happen in a ground detonation, which would have the alarming result of nuclear fallout. The models do not take into account the number of casualties that would result from fallout. A nuclear blast centered in Philadelphia would cause... Read more →