KANSAS CITY, Mo. (May 5, 2022)(CNBNews) – A Philadelphia, Pennsylvania, man pleaded guilty in federal court today to his role in a conspiracy to use stolen identities to file thousands of fraudulent tax returns and send much of the illegal proceeds to his co-conspirators in Russia. Stanuslav Lukyantsev, 34, a naturalized U.S. citizen from Kyrgyzstan, pleaded guilty before U.S. District Judge Roseann Ketchmark to participating in a conspiracy to commit wire fraud from Jan. 1, 2015, to March 1, 2018. By pleading guilty today, Lukyantsev admitted that his co-conspirators filed fraudulent federal income tax returns using stolen identities. The tax... Read more →

DOROTHY PHILBIN | CNBNewsnet GLOUCESTER CITY, NJ --Years ago, I took a Criminal Justice course at St. Joseph's University. The instructor was a captain of the Philadelphia Police Department who brought his police-issued laptop with him to every class. The first thing he told us was that what he was going to present was the truth and he had and would show us the documentation to prove it. He said that if anyone was easily offended, this was the time to drop the course. That was one of the best courses I took in my long educational career and one... Read more →

Elmer, NJ -- Appel Farm Arts & Music Center announces ArtsFest 2022, which will be held at Appel Farm on Saturday, May 21, 2022, from 10 am - 3:30 pm. This event is free and open to the public. ArtsFest is a celebration of the center’s many exciting art-making and arts education activities that have happened live and online this past year, and a chance for Appel Farm’s many partners and members of the community to come together to experience fun, hands-on arts workshops, performances, exhibits and more! Participating partners include Creativity CoLaboratory Charter School, Families to College, Scholastic Art... Read more →

Hudson County Man Sentenced to 22 Years in Prison for Distributing Heroin and Fentanyl in Prison, Resulting in Inmate Overdose Bayside State Prison in Leesburg. Image courtesy of Star-Ledger NEWARK, N.J. – A Hudson County, New Jersey, man was sentenced today to 264 months in prison for his role in trafficking heroin and fentanyl into a New Jersey state prison, resulting in the overdose of one of the inmates, U.S. Attorney Philip R. Sellinger announced. Noel Salgado, aka “Kuko,” 41, was previously convicted of one count of conspiracy to distribute and possess with intent to distribute heroin and fentanyl and... Read more →

Michael Walton of Gloucester City Inducted into Marketing Honor Society at Scranton SCRANTON, PA (05/03/2022)-- Michael Walton of Gloucester City was among the 14 University of Scranton students inducted into Mu Kappa Tau, the national honor society for marketing. The national honor society was founded in 1966 to recognize scholarship and high academic accomplishment among marketing students. The University's chapter of the honor society was established in 2016. Walton is a junior marketing major at the Jesuit university. The University of Scranton is a Jesuit university located in Northeastern Pennsylvania. Goldey-Beacom College Student-Athletes Awarded Chi Alpha Sigma Honors WILMINGTON, DE... Read more →

(Washington, D.C.) Power to Decide released a new report today revealing troubling new evidence of health insurance companies failing to provide coverage of the full range of birth control options with no out-of-pocket expense, as required under the Affordable Care Act (ACA). For this report, researchers reviewed health plans’ publicly available documents, denial letters issued to patients, and conducting a “secret shopper”-style phone survey to health plans’ customer service lines. More than 62 million women have gained access to the birth control they need without a copay thanks to the ACA. Yet as Power to Decide’s new report explains, significant... Read more → 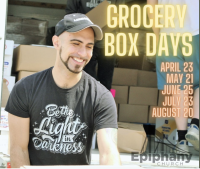 GLOUCESTER CITY, NJ--New grocery box days through the summer! Come through the church by Monmouth & Sussex to receive meat and a box of fresh produce starting at noon on these dates. No ID is needed, come grab them for a friend who can’t make it out! Location: Monmouth and Sussex Streets, Gloucester City. Next date, May 21, 2022 starting at noon Read more →

Woodward Township, PA--Police have an outstanding arrest warrant for MUBARIK ABDUL GRAVES charging him with Strangulation, Aggravated Assault & Simple Assault following an incident that occurred on Friday April 29, 2022 in Woodward Township. Anyone with information on his whereabouts is asked to contact the Woodward Township Police at (570) 858-5676. All calls will be kept confidential. Docket No.: CR-120-2022 Date Issued: Saturday, April 30, 2022 - 12:00pm Reference ID: Inc # 22-220 Warrant Type: Sourced via CRIMEWATCH®: https://clinton.crimewatchpa.com/woodwardtwppd/135769/warrants/graves-mubarik-abdul-18-pa-2718a1-strangulation-and-2-additional-charges Read more →

MONTCLAIR, NJ (05/02/2022)-- The Montclair State Department of Athletics held its National Student-Athlete Day Celebration on April 25. The event recognized the members of the 3.0 Club along with the induction of the newest class into the Chi Alpha Sigma Honor Society. In addition, the Highest GPA award and Team GPA awards were presented, along with the Scholar-Athlete Team, which featured a student-athlete from each program. Our records indicate that one or more of these honorees are from your coverage area. They include: Linsey Champa of Hammonton (08037) Lauren Pickul of Audubon (08106) Sam Ray of Williamstown (08094) Jackie Kinder... Read more →

CNBNews Note: This was sent to us by a friend. It is a short story first posted in 2007 about a boy name Logan, who lives on a ranch in Nebraska. Logan listens to Christian Radio station 89.3FM KSBJ which broadcasts from Houston, TX. The 13-year-old called the radio station distraught because he had to take down a calf . His words have wisdom beyond his years. What struck us was how mature he sounded for being so young. Also how different this youngster's life must be compared to the majority of 13 year olds who live in the state... Read more →