Delaware American Legion Welcomes Home "One of their Own" 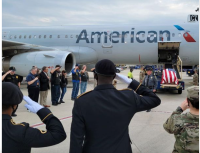 (American Legion Post 6 photo) ‘He’s one of our own’ The American Legion OCT 13, 2021 FacebookTwitterMore64 For decades, members of U.S. Army Air Force 2nd Lt. George M. Johnson’s family awaited word that his remains would be returned home to Seaford, Del. When they finally were, members of Nanticoke Post 6’s American Legion Family were there to help ensure he got the return he’d earned. Johnson was a member of the 38th Bombardment Squadron’s 30th Bombardment Group and was one of 10 servicemen killed Jan. 21, 1944, when the bomber he was co-piloting crashed into a Tarawa lagoon in... Read more →

Putting Your Home Up for Sale: 5 Tips

Selling your home can be an extremely stressful undertaking – especially if you have never had to do it before. This task takes a great deal of time and preparation to make it as stress-free as possible, and the decisions you make along the way are vital for creating a streamlined process. There are several aspects that need careful consideration before putting your home on the market – and by reading this blog, you’ll gain helpful insight into the steps that need to be taken along the way. Check out these key tips on putting your home up for sale... Read more →

The tragedy of abortion in America, it is the Leading Cause of Death for Children

New York legislators cheered and applauded Tuesday night after the state Senate removed restrictions on late-term abortions, allowing unborn babies to be aborted up until the day of birth. The Reproductive Health Act passed with a 38-28 vote and was signed into law by New York Gov. Andrew Cuomo (D). "Today we are taking a giant step forward in the hard-fought battle to ensure a woman's right to make her own decisions about her own personal health, including the ability to access an abortion," Gov. Cuomo said. republished from the January 23, 2019 CBN News ++++ Leading Pro-Life Org’s National... Read more →

by Richard A. Webster, WRKF and WWNO ProPublica is a Pulitzer Prize-winning investigative newsroom. Sign up for The Big Story newsletter to receive stories like this one in your inbox. Series: Unwatched A Louisiana Law Department That Polices Itself The Jefferson Parish Sheriff’s Office is investigating a deputy accused of holding a Black woman by her hair and slamming her head repeatedly into the pavement with such force that a witness to the Sept. 20 incident said it ripped several of Shantel Arnold’s braids from her scalp. A 14-second video captured the incident in the New Orleans suburb where, for... Read more →

WILMINGTON, DELAWARE (October 16, 2021)---Delaware Natural Resources Police and Wilmington Department of Police are investigating a vehicle accident with serious injuries that occurred Friday afternoon at the Abessinio Stadium, located within Wilmington State Parks. A 16-year-old Wilmington man failed to maintain control of his 2016 Jeep Grand Cherokee while reversing from a parking space. The Jeep, traveling in reverse, first struck two parked vehicles, a 2012 Hyundai Accent and a 2009 Cadillac Escalade. The Jeep then continued in reverse striking two individuals that were sitting on chairs behind the Escalade trapping a 65-year-old Dover woman under the Jeep. The female... Read more →

CNB Travel News: Experience a Romantic Escape Above the Clouds in Philadelphia

image provided PHILADELPHIA PA--Experience a romantic escape above the clouds at Philadelphia’s first-and-only Forbes Travel Guide Five-Star Hotel and Spa at Four Seasons Hotel Philadelphia at Comcast Center. Unwind together in secluded settings while soaking in unobstructed SkyHigh views or celebrate life’s special moments with celebratory amenities and luxe Jeff Leatham florals. Be inspired by this itinerary for time together. 1. Take love to new heights Embark on a journey above the clouds to the highest situated hotel in North America. Guests arrive in style as they check-in at the Sky Lobby, located on the 60th floor. 2. Plan a... Read more →

CNBNews photo Voorhees, NJ – Animal Welfare Association has teamed up with Subaru of America, Inc. for Camden Make a Dog’s Day, the local activation of the third annual National Make a Dog’s Day. In 2019, Subaru established National Make a Dog’s Day as a national holiday on October 22 as part of the automaker’s commitment to supporting the well-being of pets. The day is aimed at helping the hard-to-adopt shelter dogs find loving homes and encourages people to do something special for their dog to “make” their day and share their happy dog on social media using #MakeADogsDay. The... Read more →

Explore a New Community Before Buying or Building

When it comes time to move, the decision should not be made lightly. There are several attributing factors that could greatly impact your choice of location. Some things to consider when selecting a community to live in are as follow. Property taxes HOA dues Local school district Local park district Shopping and nightlife Transportation and commuting This extensive list only touches on a few of the key things that people should consider before moving to a neighborhood. It doesn't matter if the new home you like has every detail you are looking for, including marble countertops, a rolling library ladder,... Read more →

(nee Pearce) On October 9, 2021, of Audubon Park, NJ. Age 79 years. Beloved wife of the late Gerald Ziegler. Dear mother of Anthony (Susan), Richard S., Gerard (Christine), Jr., Manda (Scott) and step-children, Douglas and Adam. Loving grandmother of Anthony, Alyssa, Scotty, Jenna, Cash and Dallas. She is also survived by her sister, Barbara (Jack). Funeral service and interment will be private at the convenience of the family. In lieu of flowers, donations may be made in her memory to your local animal shelter. Arrangements by the FOSTER-WARNE FUNERAL HOME, Audubon and Collingswood, N Read more →

Michelle Donio, of Buena, NJ, donated $9,000 from a fundraiser held last month in her honor to the Patient Assistance Fund at Sidney Kimmel Cancer Center - Washington Township, where she has received care since December 2020. The Patient Assistance Fund provides financial assistance with rent and utilities for those in need during cancer treatment. The presentation took place at a special event for women, titled “Innovations in Women’s Health,” recently held at Jefferson Cherry Hill Hospital. Donio, a lifelong competitive equestrian and riding instructor for 30 years, thanks friend Jackie Smith of Summer Jade Stables in Waterford, NJ -... Read more → 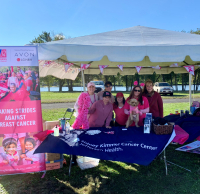 The Sidney Kimmel Cancer Team from Jefferson Health - New Jersey was out in force Sunday at Cooper River Park for the annual American Cancer Society “Making Strides Against Breast Cancer” event. For more than two decades, “Making Strides Against Breast Cancer” has united communities throughout the U.S. in the fight against this deadly disease. Today, Making Strides is the largest network of breast cancer events in the nation. Sunday's event at Cooper River Park was sponsored by Making Strides of Philadelphia and Southern New Jersey. For more information about cancer care and services at Jefferson Health - New Jersey,... Read more →

5 Things to Know about Delta-8 Tetrahydrocannabinol – Delta-8 THC Español (SEPTEMBER 14, 2021)--Delta-8 tetrahydrocannabinol, also known as delta-8 THC, is a psychoactive substance found in the Cannabis sativa plant, of which marijuana and hemp are two varieties. Delta-8 THC is one of over 100 cannabinoids produced naturally by the cannabis plant but is not found in significant amounts in the cannabis plant. As a result, concentrated amounts of delta-8 THC are typically manufactured from hemp-derived cannabidiol (CBD). It is important for consumers to be aware that delta-8 THC products have not been evaluated or approved by the FDA for... Read more →

Jefferson Health was honored at Friday night’s “Wave of Light” event at Cooper River Park in Pennsauken, NJ. The event was sponsored by Three Little Birds, a nonprofit organization that provides pregnancy and infant loss support. Jefferson Washington Township Hospital and Thomas Jefferson University Hospital in Philadelphia were presented with two CuddleCots, for use in their hospitals to support parents who have experienced infant loss. The CuddleCots were provided through the fundraising efforts of Elmer, NJ, couple Quinn Labriola and Steve Wdzieczkowski, who lost their full-term baby, Cash, in September 2020. The two wanted to make the donation in memory... Read more →

A former Newark city official and officer of the Newark Community Economic Development Corp. (NCEDC), along with two Newark business owners, were indicted today by a federal grand jury in connection with a conspiracy for the official to obtain corrupt payments intended to influence and reward him for assisting the business owners with the acquisition and redevelopment of various Newark-owned properties, Acting U.S. Attorney Rachael A. Honig announced. Carmelo G. Garcia, 45, of Hoboken, New Jersey, a former Newark official, and Frank Valvano Jr., 52, of Florham Park, New Jersey, and Irwin Sablosky, 60, of Springfield, New Jersey, co-owners of... Read more →