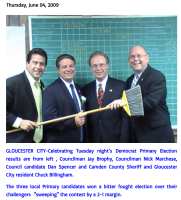 William E. Cleary Sr. | CNBNews GLOUCESTER CITY, NJ (April 26, 2021)--Gloucester City Mayor Dan Spencer this evening made a surprise announcement that he was resigning from office effective June 1, 2021. The announcement was made on his personal Facebook page. He gave no precise reason why he was quitting although he did say, "It is with a heavy heart that I must do what is best for me and my family at this time." Spencer worked for 30 years for the Camden County Department of Health and Human Services. He retired in 2004. Although he had said many times he was looking forward to getting away from politics he jumped back into that political realm in 2009 running unopposed for a seat on City... Read more →

WINSLOW TOWNSHIP NJ (April 26, 2021)--On April 19 at approximately 2030hrs, Winslow Twp Police Officers were dispatched to the area of Linden Ct and Lehigh Manor drive for the reports of shots fired. Upon arrival, officers began speaking with several witnesses and victims that were on the scene. It was learned that an unknown adult male and female were walking on Lehigh Manor Dr. when they began arguing with area juveniles, who were between 8-13 years of old. The adult male produced a handgun from his waistband and subsequently fired one round in the direction of the juveniles. Fortunately, the round did not strike any of the juveniles. Officers began searching the area looking for the suspects. Detectives arrived and began processing the scene. A... Read more →

NJ Sierra Club Opinion Tomorrow, the NJ Board of Public Utilities will vote on Dockets ER20080557, ER20080558, and ER20080559 - In the Matter of the Application of PSEG Nuclear, LLC and Exelon Generation Company, LLC for the Zero Emission Certificate Program. If approved, these dockets would award the Hope Creek, Salem Unit 1, and Sale Unit 2 nuclear units Zero Emission Certificates (ZECs) for the 2nd eligibility period from June 2022 - May 2025. “PSEG is back for another round of $300 million subsidies. This will be the third year in a row. These subsidies aren’t needed and they take money away from important programs like offshore wind, solar, and energy efficiency. These subsidies are more about greed and not need. There hasn’t been a... Read more →

Hunting is one of the challenging and yet rewarding activities you can engage in as a recreational activity. However, anything can happen while in the thickest, and you lose your way back. You should therefore share your hunting itinerary with your family members or friends before heading to the bush. This makes it easy for your friends or authority to begin a search should there be any emergencies. So, what information on your hunting plan can help law enforcement officials find you? Your name and that of your groupies, cell phone numbers, hunting destination and alternatives, and a brief description of your vehicle will do. Read on to learn more. What is a hunting plan? It’s a document with your details, those who will be... Read more → 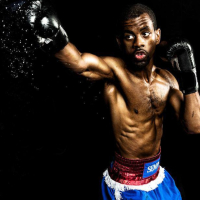 Jamel William Herring, a former Marine, has held the World Boxing Organization junior lightweight title since May 2019 when he defeated Masayuki Ito. Herring, a southpaw, is currently ranked as the fourth-best, active junior lightweight in the world. Born in Rockville Centre, New York, on Oct. 30, 1985, Herring enlisted in the Marine Corps in October 2003. After training at Marine Corps Recruit Depot in Parris Island, South Carolina, he was stationed at Camp Lejeune, North Carolina. He then served in Fallujah, Iraq, in 2005 and redeployed to Iraq in 2007 at al-Taqaddum. After his second Iraq tour, Herring returned to Camp Lejeune, where he was on the all Marine Corps boxing team. 01:32 Video Player In 2010, Herring won a silver medal in the... Read more →

Gloucester City – On April 19, 2021. Age 34. Loving mother of William McCallin, Ian McCallin, McKenna McCallin and Joshua Dabney. Cherished daughter of Catherine Pearson (nee Armstrong) and the late William DePietro. Beloved sister of Mary Pearson and step-sister of Ashley, Jennifer and Matthew Pearson. Predeceased by her husband Alexander McCallin and her step-father, Stephen Pearson. Also survived by many loving aunts, uncles and cousins. Eva-Marie was a graduate of Gloucester High School and was employed at Ancora. Relatives and friends are invited to her viewing on Wednesday morning, April 28, 2021 from 9:30 to 11:15 AM at St. Mary’s R.C. Church, 426 Monmouth St., Gloucester City. Her Mass of Christian Burial will be celebrated at 11:30 AM and livestreamed on Saint Mary’s Church... Read more →

Vape Shop: The vape shop is established by the Electronic Nicotine Delivery System (ENDS) that can engage with a wide variety of products and activities. A vape shop is a retail outlet that sells electronic cigarettes also Online vape shops are available. A vape shop offers a large number of products for e-cigarette. Vape shops sell numerous types of vape products like ENDS devices, ENDS replacements, ENDS pre-mixed e-liquids, ENDS hardware, products related to ENDS. They also sell tobacco products and tobacco-related products. Most vape shops do not sell "big tobacco" e-cigarette products. In 2013, searches in vape shops by online search engines surpassed the search of e-cigarettes. In vape shops, there will be one-third of the sales of e-cigarette products. The independent e-cigarette market... Read more →

Napoleon at Wagram by Joseph Chabord. © Wikimedia The move follows the purchase of the estate, which now consists of buried bricks, an old bridge, and a gardener’s cottage on 200 acres, by the City of Bordentown and preservation nonprofit D&R Greenway Land Trust for $4.6 million (€4 million) in the state of New Jersey. Joseph Bonaparte and Point Breeze According to NJ.com, the museum could open as early as this autumn. The site’s new caretakers hope to install audio tours and historic signage throughout the area. The estate most recently served as a home for the Catholic group Divine Word Missionaries. The original Point Breeze included sculpture gardens, coach trails, brick bridges, stables, and a lake Bonaparte made by damming a nearby creek. “There’s... Read more →

Atlantic City Electric is giving away nearly 1,000 trees to residential customers through the Arbor Day Foundation’s Energy-Saving Trees program. For the 10th year in a row, this Earth-friendly and environmentally focused initiative can help you reduce your energy use and save money. Beginning today, you can reserve one free tree per household by visiting arborday.org/ace. You can choose from several species, including Bald Cypress, River Birch, Serviceberry and Sweetgum. Your one-gallon tree will arrive at your home via mail by the end of May. Woolwich Township resident, Jessica Gilbert, included her whole family in planting her free Energy-Saving Tree in 2020. “My family enjoyed planting our 2020 tree together,” said Gilbert. “My children had fun picking the right spot with the locator tool, digging,... Read more →

Posted by CNBNewsnet on Monday, April 26, 2021 at 09:30 AM in Atlantic/Cape May COUNTIES, Current Affairs, DOWN THE SHORE, South Jersey | Permalink | Comments (0)

TRENTON (April 21, 2021) – The New Jersey Lottery today presents all prizes over $1 million that have been claimed anonymously between January 1, 2021 and March 31, 2021. Players who win $599.99 or less from the New Jersey Lottery can claim their prize at any of the Lottery’s nearly 7,000 retailers and be paid immediately in cash. Players who win $600.00 or more must file a claim with the Lottery. Each month, the New Jersey Lottery receives approximately 4,000 claims. Transparency and integrity are vitally important to the NJ Lottery. In the interest of maintaining that transparency, here are the prizes of $1,000,000 or more claimed by anonymous players in the first quarter of 2021. DRAW GAMES: GAME DRAW DATE CLAIM DATE AMOUNT WON... Read more → 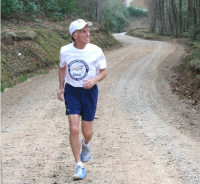 – 78-year-old Guinness World Records Distance Runner to Run from Los Angeles to Washington DC The Amazing Friendship Run Uniting America with Hope, Health and Friendship, Launches on May 7 Los Angeles – Uniting America with hope, health and friendship, The Amazing Friendship Run with world-renowned ultra-long-distance runner, Stan Cottrell, is an unparalleled sporting initiative featuring the incredible endurance of one man on a mission to impart positivity, connect communities and encourage greatness in today’s rapidly changing world. Cottrell is on a life-long mission to inspire and lead by example. Cottrell set a Guinness World Record for running across the United States in just 48 days. He has run across Europe in 80 days and ran 2,152 miles in 53 days across China where foreigners... Read more →