Burlington County Prosecutor Scott Coffina announced that a 29-year-old Browns Mills man has been sentenced to 12 years in New Jersey state prison for sexually assaulting a woman in a Burlington City alley in late 2019. John Lewis, who pled guilty in February to Aggravated Sexual Assault (First Degree), must serve 85 percent of the sentence before becoming eligible for parole. The term, which was negotiated by the Prosecutor’s Office, was handed down yesterday in Superior Court in Mount Holly by the Hon. Philip E. Haines, J.S.C. As part of the sentence, Lewis will be placed on the New Jersey sex offender registry upon release and also be subjected to parole supervision for life. The investigation began after City of Burlington police officers were called... Read more →

Egg Harbor Township, April 15, 2021 – Local small businessman, former Assemblyman and 2nd Legislative District State Senate Candidate Vince Polistina called for civil service protections to be restored in Atlantic City, accusing Assemblyman Vince Mazzeo of allowing the seemingly endless state takeover to gut protections for the city’s police and fire departments, and public workers. Polistina pointed to comments in a POLITICO story from April 12th, where Mazzeo praised the takeover and welcomed a four-to-five-year extension, without condition. The state has had broad authority over the struggling seaside city since 2016, with the power to overturn city council decisions, restructure debt and even abolish city agencies. Polistina said the takeover has been particularly harmful to the morale of public safety professionals in the city.... Read more →

By Todd DeFeo | The Center Square contributor New Jersey Gov. Phil Murphy delivers his annual budget address Feb. 23, 2021. YouTube / Gov. Phil Murphy (The Center Square) – Gov. Phil Murphy is considering an executive order that would send $40 million to undocumented immigrants in New Jersey, according to a report. According to Politico, Murphy could pull the money for “one-time stimulus payments” from remaining Coronavirus Aid, Relief, and Economic Security (CARES) Act funds. However, advocates apparently want “larger relief measures,” the report suggests. During a Wednesday news briefing, Murphy indicated he is also looking to pull the money from the $1.9 trillion American Rescue Plan (ARP) Congress passed. As part of the measure, the federal government is sending $10.2 billion to New... Read more →

Posted by CNBNewsnet on Thursday, April 15, 2021 at 02:37 PM in Atlantic/Cape May COUNTIES, Current Affairs, DOWN THE SHORE, South Jersey | Permalink | Comments (0)

Delaware to Have One Ton of Plastic Bags Made into Benches 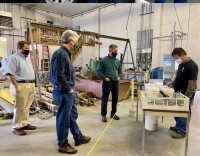 10 Classic Dating Modes That Have Come Back as New Trends

It's trendy to see, hear and talk about new trends these days. It goes for everything. And dating is not exempt from this practice as well. Every few days, there's a new dating trend that young people feel really excited to talk about knowledgeably. People have been doing these since men and women started dating each other. Only they were known by different names. So without further ado, let's delve into some of the top 'new' (nah… not really) dating trends. Ghosting What we want to tell you here is that these are nothing new, just like spank dating. A girl and a guy go on some dates and maybe get intimate, maybe not yet. Everything looks fine till one of them suddenly vanishes. Meaning... Read more →

by Bill Donohue | CNBNews Contributor A baby who was aborted at full-term source PLANNED PARENTHOOD Gloucestercitynews.net graphic files Catholic League president Bill Donohue comments on a new abortion law in Hawaii: Hawaii's new abortion law yields different fruit. The bad news is that feminists are once again endangering the lives of women. The good news is that fewer doctors want anything to do with abortion. Feminists scored another victory this week by championing a law in Hawaii that allows nurses to perform an abortion. In a time when lawmakers demand that every segment of the population be afforded the highest standards of medical care, it is striking to note that there is one exception: The credential bar is actually being lowered for abortionists; Hawaii... Read more →

Dealing With Grief and The Effects on Mental Health

When there is a loss of something precious or someone close to your heart, what happens to you is known as grief. You may not be familiar with a person who is bereaved before you can feel their grief. There are different ways people experience grief. However, comparing yourself to others when they lose something or someone closer to them may not be required of you, regardless if you are affected or not. How long will grief last? At times, when someone is experiencing grief, this may make the easiest undertaken look most difficult even to attempt. The following are the observations: Sadness within Pain Unbelief Anger Longing Being resentful Getting worried Abandonment Worry Guilty feeling Combining any of the above feelings may seem things... Read more →

In recognition of Earth Day, the Delaware Department of Natural Resources and Environmental Control joins the Christina Conservancy to encourage northern Delaware residents to get outside and safely clean up their communities. The Christina River Watershed Cleanup campaign is mobilizing volunteers throughout April to pick up trash in their own neighborhoods, on beaches and along waterways within northern New Castle County, from Brandywine Hundred south through Glasgow and Bear. "For nearly 30 years, DNREC has partnered with the Christina Conservancy to focus volunteer efforts on keeping the waterways and watersheds of northern Delaware clean through the annual Christina River Watershed Cleanup," said DNREC Secretary Shawn Garvin. "This year, as we celebrate Earth Day all month long, we urge all Delawareans statewide to get outside and... Read more →

22 Co-sponsors in the Senate and over 47 in the House join resolution to raise national awareness of the state of Black maternal health in the United States. WASHINGTON, D.C. – U.S. Senator Cory Booker (D-NJ) and Representatives Alma Adams (NC-12) and Lauren Underwood (IL-14) introduced a resolution recognizing Black Maternal Health Week, “to bring national attention to the maternal health crisis in the United States and the importance of reducing maternal mortality and morbidity among Black women and birthing persons.” Black Maternal Health Week is observed from April 11 through April 17. The legislation has 22 co-sponsors in the Senate and over 47 in the House. “As it stands, the United States has the highest maternal mortality rate of all developed nations, a crisis... Read more →

GOP frontrunner says Governor Murphy flat out lied to taxpayers and public employees during his campaign ATLANTIC CITY, NJ – MBA/CPA, successful small business owner, and GOP frontrunner for governor, Jack Ciattarelli, slammed Governor Phil Murphy for his latest dishonest retreat on a campaign promise. Phil Murphy ran against the Atlantic City takeover four years ago. Murphy’s done nothing about the takeover in the four years he’s been governor. Now, he wants to extend it indefinitely. “Five years ago, Governor Murphy looked Atlantic City local leaders, employees, and residents in the eye and opposed the takeover of their community. Now, after four years of doing nothing to end it, his lieutenant governor is poking a finger in the eye of everyone in the city by... Read more →

for sexual abuse of two teen boys, including foster child A Tullytown man was sentenced Tuesday to two terms of 10 to 20 years in state prison for sexually abusing two teen boys, including a foster child in his care. John Michael Evans, 41, pleaded guilty in February to two counts of involuntary deviate sexual intercourse and one count of sex trafficking of a minor. Calling him an evil man and someone who preys on the weak and disadvantaged, Common Pleas Judge Raymond F. McHugh imposed the negotiated sentenced on Tuesday to 10 to 20 years in state prison, followed by 20 years’ consecutive probation. Evans was also ordered to undergo an evaluation by the Sex Offender Assessment Board to determine his level of sex... Read more →

(Washington, D.C.) – Today, Citizens Against Government Waste (CAGW) named California Governor Gavin Newsom (D) our January 2021 Porker of the Month for hurting Californians with his hypocritical and ineffective policies on COVID-19. On November 6, 2020, Gov. Newsom violated his own strict coronavirus lockdown rules by attending a large dinner party at the famed French Laundry restaurant in Napa Valley. More than two dozen people were there, and no one was wearing a mask, showing Californians that Gov. Newsom did not care about them or his own rules. That was a huge tipping point for a petition to recall the governor, which now has more than 1.2 million signatures. Californians are also outraged that Gov. Newsom shut down indoor and outdoor dining but allowed... Read more →

Down The Shore: Cape Beverage Partners with Great America Moonshine for SJ Distribution

Apr. 12, 2021 at 9:40 AM Cape May, NJ — Cape Beverage is thrilled to welcome another stellar brand to their lineup. Great America Moonshine, brewed and bottled in Detroit, Michigan, will be distributed to the counties of Cape May, Atlantic, Cumberland, Salem, Gloucester, and Camden beginning April 19th. “Great America is an excellent complement to Cape Beverage’s portfolio,” says Cape Beverage CEO Ryan Krill. “They have a unique product that we don’t currently offer, and the liquid is fantastic. I was able to tour their facility in Detroit, and they are a first-class operation: these guys are total pros and I’m proud to count them among the Cape Beverage family. I look forward to a long and prosperous relationship.” Founded by Stout Brewing Company... Read more →

April 13, 2021, 7:19 pm | in The following statement is being released by the Burlington County Health Department and Health Department Director Dr. Herb Conaway: On the morning of April 13, 2021, the Centers for Disease Control (CDC) alerted the nation’s healthcare institutions of a rare cerebral vein clotting disorder associated with the prior administration of the Johnson & Johnson COVID19 vaccine. Following the guidance by CDC and the NJ Department of Health, the Burlington County Health Department has paused its administration of Johnson & Johnson vaccine. Of the 6.8 million doses Johnson & Johnson vaccine administered nationally, just six women between the ages of 18 and 48 have been reported as acquiring the rare cerebral vein clotting disorder in the wake of vaccination... Read more →