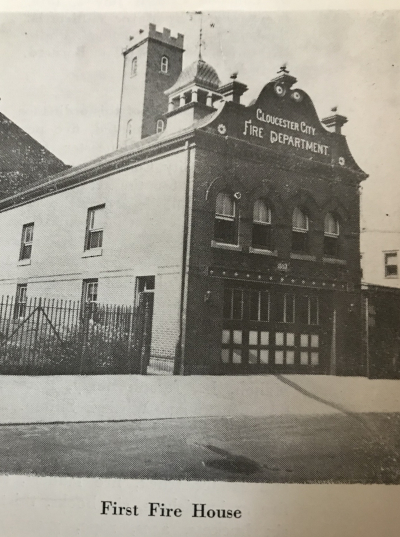 In 1661, another group of colonists from Dublin, Ireland, under the leadership of Robert Zane, arrived at Gloucester Point aboard “Ye Owners Adventure,” joined those who had not moved to Burlington and again began laying out a town worthy of distinction.

The first roadway cleared was and old Indian trail from “The Point” to the north, which they named “Kings Highway” (King Street) in hopes of someday seeing their King drive along its pine tree lines Thorofare.

The division of the tenths having been completed, under the “Concessions and Agreements,” signed in 1676, Gloucester Pointe fell in the third tenth. Because of its Irish settlers it soon became known as the “Irish Tenth.” Its boundary extended from the south branch of Pennsauken Creek on the north to Big Timber Creek on the south and from the Delaware River to the ocean.

The boundary of the fourth tenth started from Big Timber Cree, extending south to Oldman’s Creek, or Berkley River, as it was then called, and from the river to the ocean, as did the third tenth.

Due to political disturbances in the provincial government and the fact that no legislative sessions were held in the Province of West Jersey for several years, the people of the third tenth (now Camden County) and the fourth tenth (now Gloucester County) seized upon the opportunity to organize the County of Gloucester.

On May 26, 1686, a convention was held at Arwamus which “after mature deliberation, promulgated an instrument which became famous as the “County Constitution.”

This was the origin of old Gloucester County, comprising the third and fourth tenths. The only county that can deduce its existence from “a direct and positive compact between her inhabitants, who deemed themselves a body politic, a democratic commonwealth, with powers of legislation.”

Arwamus, or Gloucester Point, was selected as the county seat. Thomas Sharp, a surveyor from Newton (West Collingswood), also the county’s first school teacher, was ordered to lay out the town on a large scale, having thirteen streets with a public square in the middle.

An area, three chains square, was reserved for a market place. Soon “Gloucester Town” took on the official look of a seat of government.

The first public building was built of logs, in 1694, on the southwest corner of King and Market Streets, 20 by 15 feet, to serve as a court house and jail.

As conditions required, improvements were made until 1719 when the Freeholders specified a new court house to be built of brick, on the same site.

Gloucester Town served old Gloucester County as the seat of government for 100 years.

A history of Gloucester City as an industrial town would be incomplete without a sketch of the men responsible. David S. Brown who overcame obstacles and with his business training and ingenuity transformed the fishing village of Gloucester Town, with less than 200 residents into a thriving manufacturing city.

David S. Brown was born near Dover, New Hampshire, July 27th, 1800 the youngest son of Wm. Brown and Abigail Peaslee who were member of the Society of Friends. At 10 years of age he went alone to Boston to further his education. Riding on the same stage beside him was Daniel Webster. This was the beginning of a life long acquaintance. In 1817 he went in business with his brothers in Philadelphia. In 1821 he became a member of the firm of Hacker Brown and Co., dry goods commission merchants where he remained until 1830. In this year the firm name was changed and became David S. Brown and Co. Early in his business career he became interested in the manufacturing of cotton goods, as well as the selling of the same. After about ten years of study and planning the idea in his mind materialized. He organized the Gloucester Land Co. to purchase sites for the erection of mills. He organized the company which built and operated in 1844 the first manufacturing company, known as Washington Mills and later the Argo Mills. The buildings were razed in 1950 by the present owner, the Armstrong Cork Co. where raw cork imported from Europe is stored.

In 1846 he formed the Gloucester Land Co. In 1870 he was President of the Co. formed to purchase and operate the Gingham Mills. In 1871 the Ancona Printing Co. was incorporated. Here again we find David S. Brown being the promotor. This company was organized for the introduction of new discoveries in the application of colors to cotton goods. Here “Dolly Vardens” were first manufactured. Also, in 1871 he was President of the Gloucester Iron Works. This foundry had been started by Wm. Sexton in 1864. Shells were cast here for the U.S. Government for use in the Civil War. This site is now occupied by the south yard of the New York Shipbuilding Co. He was one of the original organizers of the Gloucester Terra cotta Works. In 1872 he was one of a group of men who procured a charter for the Gloucester City Savings Institution which continued for about 14 years. In 1873 he was one of the incorporators of the Gas Lighting Co. of Gloucester. In 1865 Mr. Brown was President of the directors who built the Camden, Gloucester and Mt. Ephraim R.R. He died July 6th, 1877.

On the 7th of July, 1877 a special meeting of City Council was held and the following resolution was passed: Whereas, Almighty God had removed to a better world our friend and benefactor, the late David S. Brown, therefore, be it resolved that we, in behalf of the citizens of Gloucester City, express our sensibility of the loss we have sustained. And resolved, that Mr. Brown was the leading spirit in establishing all the industrial institutions, and that he was the foremost man in furthering many interests in our town, the benefit of which will long be felt by our people.

The Gloucester Print Works also known as “The Bleachery” was the second industrial establishment originated by David S. Brown and with the following incorporators: Wm. Folwell, Philip J. Grey, Gideon Scull, Wm. Baugh, David S. Brown, Robt. F. Walsh and Chas. J. Churchman as the Gloucester Mfg. Co. was chartered in 1845 for the manufacturing, bleaching, dyeing and printing and finishing of all goods of which cotton or other fibrous material forms a part. The management was the same as that of the Washington Mfg. Co. and the primary object was to dye, bleach, and print the product of the Washington Mills.

In 1850 the works was built along the Delaware River at the foot of Essex Street on ground purchased by the Gloucester Land Co. from Frederick Plummer and adjoined his property. The works was enlarged in 1855 for the introduction of printing machinery.

The entire plant while in successful operation was totally-destroyed by fire on September 14th, 1868. Within six months the works was rebuilt despite a stormy early autumn and a server winter, new machinery installed and complete operation restored. Credit for this restoration is due to the energy of Mr. Brown, President; Mr. George Hyle, Vice President; and Daniel Schofield, Superintendent.

This plant was taken over in 1910 by the Welsbach Gas Mantle Co. which ceased operation in 1938. During the beginning of World War II the New York Shipbuilding Co. took over the plant to manufacture Landing Craft for the invasion of Sicily. When television reached the stage of production the Radio Corporation of America purchased the plant.

The Gloucester City Savings Institution was incorporated in the month of July 1872. This bank is conducted for the exclusive benefit of its depositors, its charter inhibiting the mangers from any direct or indirect personal business transaction with the institution. David S. Brown is its president and F. P. Pfeiffer is its actuary. Interest paid to depositors is five per cent per annum.

In 1661, another group of colonists from Dublin, Ireland, under the leadership of Robert Zane, arrived at Gloucester Point aboard “Ye Owners Adventure,” joined those who had not moved to Burlington and again began laying out a town worthy of distinction.

The first roadway cleared was and old Indian trail from “The Point” to the north, which they named “Kings Highway” (King Street) in hopes of someday seeing their King drive along its pine tree lines Thorofare.