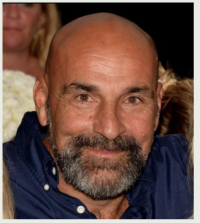 Paul was a proud member of Roofers Local 30, Philadelphia, PA, and stood staunchly behind his union brothers.

Bubba loved fishing, golfing , shooting pool, travelling...and taking rides in his beloved Z, top down and music blasting.   He was an avid Eagles and Phillies fan....But most of all, he cherished his family and multitude of friends...he was always there for everyone who needed him...His ready smile lit up his eyes and his positive outlook and easygoing attitude was infectious...he left his mark on so many, and will be sorely missed by all who were fortunate enough to have him in their lives .

Family requests in lieu of flowers, donations be made in Paul’s memory to Rock Ministries, 2755 Kensington Ave., Philadelphia, PA 19134.

Paul was a proud member of Roofers Local 30, Philadelphia, PA, and stood staunchly behind his union brothers.