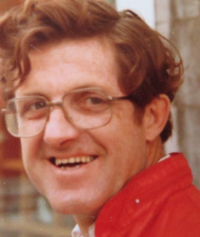 Jack's Cheer captured in Montreal in 1984

Jack was born in July 1934 to John and May McNeill who immigrated from Ireland and settled in Gloucester City, NJ in the late 1920’s. The McNeills operated a grocery store called McClelland’s at the corner of Broadway and Morris Streets (now the Morris Street Deli). In the 1940s and ‘50s, Jack, and his brothers were familiar figures on the streets of Gloucester City as they delivered groceries by bicycle. Jack graduated from Gloucester High School 1951, where he lettered in wrestling, basketball, and football. He completed higher education at Ursinus College 1954 and University of Pennsylvania School of Dentistry 1959, then served 11 years in the US Army. As Lieutenant Colonel in Vietnam 1969-1970, Jack ran a dental MASH unit outside Saigon and joined helicopter missions to retrieve soldiers wounded in jungle combat.

Jack and his young family moved to Princeton in 1970 where Jack was a Princeton Dental Group partner and New Jersey Dental Association officer. Jack drew respect as an excellent dentist graced with a gentle touch. In the tradition of a family doctor, he ensured his patients’ comfort 24/7.

Jack’s easy warmth, humility, generosity, and dry humor charmed all he met. Socializing, outdoor play, and a deep appreciation of nature kept Jack vibrant. A trickster, Jack wound jolly tales. He eagerly shared life’s joys with his children and especially his three grandchildren. Quite an athlete throughout life, Jack enjoyed all variety of sports with a jaunty, competitive spirit. He treasured biking with a buddy to the D&R Canal towpath and lazing along its banks, #1 hoagie and magazine in-hand. He was doe-eyed over Karin’s lakeside forest home in Vermont. Greathearted with time and strength, Jack led countless moving days when his parents and next generation changed residences. At home, Jack tended his yard in any weather, ready to chat with neighbors passing the yard edge along a historic shortcut between streets. Through Jack’s stewardship and neighbor’s efforts the path is now an official Princeton Town right-of-way. In commemoration, family and neighbors have named the path “Jack’s Peaceful Passage”.

Jack's Cheer captured in Montreal in 1984