Five from afar are drawn to Atlantic City 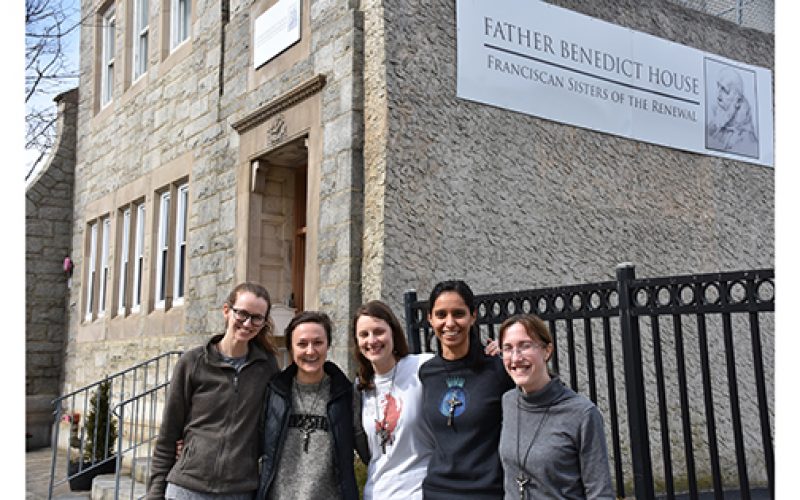 ATLANTIC CITY — For the majority of millennials, I’m guessing, the top appeals for this glitzy Eastern seaboard town include, in no particular order: sun, sand, casinos and locally famous White House subs. (Well, probably the first three. The last one ain’t bad, though. Try the meatball sub.)

Five young women from across the globe, though, came to Atlantic City for something much different: to find God and discover his will for their lives. They are Connie Boesch, 30 years old, from Omaha, Nebraska; Emma Hilton, 27, Liverpool, England; Sandy Martinez, 27, Portland, Oregon; Morgan Whitby, 26, Sydney, Australia; and Mariah Wilkins, 26, Elk Grove, California.

They have spent the past six months as Saint Michael’s Missionaries, a program of Atlantic City’s Franciscan Sisters of the Renewal at Saint Michael’s Convent. These women, working with the Franciscan Sisters since last September, live a life of prayer, community and works of mercy throughout the city, inspired by the Gospel mandate to give up everything and follow Christ.

Residing at the Father Benedict House, named after Father Benedict Groeschel, one of the founders of the CFR order, their structured days include time for prayer, fellowship and ministry with the Atlantic City community. I have been privileged to interact with them at various events facilitated by the Sisters — such as the First Saturday Days of Reflection, the weekly Wednesday Bible Study, and the twice-weekly soup kitchen — and have witnessed their ever-present joy and confidence that this is where God wants them to be, in this moment.

“I was afraid when I first decided to come, but I’ve found peace in accepting God’s call,” said Sandy Martinez, who, like her fellow housemates, participated in the Franciscan Sisters of the Renewal’s “Come and See” Program, which allows young women the opportunity to visit the sisters and observe their life and ministry for a possible vocation with the CFRs.

This missionary program in Atlantic City is more long-term; after the women leave at the beginning of May, they will have spent eight months in discernment. All acknowledge that it has been a challenging but rewarding time for them in the Diocese of Camden.

For Martinez, who has shared her vocal and musical talents at different events with the sisters, the experience “has been the hardest, and most beautiful thing I’ve done in my life — living intentionally, growing in holiness. It has been a beautiful blessing.”

Mariah Wilkins knows the challenges Martinez describes, and adds, “I am growing … there’s plenty of support here” as she figures out her next steps.

“I wanted to make a bigger effort, to find God’s will for me,” she explains, noting that she feels “connected here, building a relationship with the sisters, my housemates, and the poor of Atlantic City.”

Morgan Whitby, one of the two women from outside the United States, says that “the Lord shows us who we are in our hardest moments.”

She used to lead a young adult ministry in her hometown of Sydney, Australia, but she felt the Lord “persisting, for me to jump on a plane, to a country I’ve never seen, to people I’ve never met.”

“There is a joy to serving the Lord, and surrendering. To not know where he’s heading you, but knowing that he has it,” she tells me.

Emma Hilton appreciates “the structured prayer life,” which includes Mass with the sisters, personal prayer, and the rosary.

“I’m letting the Lord lead me, and I love working alongside the sisters and housemates, talking with them, and sharing my life.”

She’d recommend the program to any woman discerning their life’s journey. “What you learn, will serve you well” wherever you go, she says.

For Connie Boesch, “It’s not every day you get to be around religious.”

Before coming to Atlantic City, Boesch had spent the past five years working at a rehab facility for those with brain and spinal cord injuries, but the possible call to a religious life for her “never left me,” she says. “Seeing the Franciscan Sisters’ ways, their interactions with others, has been fruitful.”

Sister Agnes, local servant (superior) of the Franciscan Sisters of the Renewal in Atlantic City, calls the last six months with the five women “a work of God, and a powerful experience of his divine providence.”

There are already plans for the next group of Saint Michael’s Missionaries to arrive this fall, for young women seeking for the Lord to “carry out in you what is pleasing to him” (Heb 13:21).

“This experience is not without hope, joy and love,” Whitby says. “Jesus is staying present with me every step of the way.”

For more information on the Franciscan Sisters of the Renewal and the Saint Michael’s Missionaries, visit www.franciscansisterscfr.com/

Five from afar are drawn to Atlantic City
by Carmela Malerba

ATLANTIC CITY — For the majority of millennials, I’m guessing, the top appeals for this glitzy Eastern seaboard town include, in no particular order: sun, sand, casinos and locally famous White House subs. (Well, probably the first three. The last one ain’t bad, though. Try the meatball sub.)