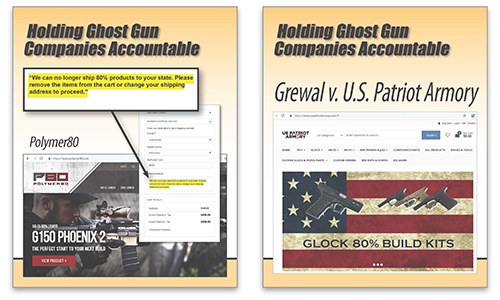 “Ghost guns” are partially-assembled firearms sold with the parts needed to create a fully-operational gun – and often even with the instructions on how to do so. Because “ghost guns” are incomplete at the moment of sale, the companies do not require their buyers to go through background checks. That allows prohibited persons – including terrorists, fugitives and felons – to get firearms that they otherwise could not obtain. And completed “ghost guns” lack serial numbers, which makes it harder for law enforcement to trace the weapons to their owners and solve gun-related crimes.

“New Jersey law is clear: ghost guns are illegal in our state,” said Attorney General Grewal. “Since U.S. Patriot Armory decided to ignore our laws and advertise and sell ghost guns to New Jersey residents, I’m taking action. We’re filing the first state civil enforcement action against a ghost gun company to demand penalties and to get an order blocking New Jersey sales. This is my message to the entire ghost gun industry: If you continue selling dangerous and unlawful weapons into our state, we will come after you in court, just like we did against U.S. Patriot Armory today.”

“By advertising and selling dangerous and illegal ghost guns to New Jersey residents, failing to disclose the criminal liability buyers are exposing themselves to, and affirmatively misrepresenting that these guns are legal to purchase, this company has shown blatant disregard for New Jersey’s consumer protection laws,” said Division of Consumer Affairs Acting Director Paul R. Rodríguez. “The company continued to flout the law, despite being put on notice of the various state laws and regulations violated by this conduct. In his cease and desist letter, the Attorney General promised firearms sellers across the country – including U.S. Patriot Armory -- that we would take legal action against vendors who persisted in deceptively marketing and selling unlawful ghost gun kits in our state. Today we are making good on that promise.”

At the same time, Attorney General Grewal announced that in response to cease-and-desist letters he had sent to ghost gun companies ordering them to stop advertising and selling their products in the state, fifteen ghost gun companies agreed to block all New Jersey sales. To take a few examples, the companies now post warnings to all potential New Jersey buyers that they “can no longer ship 80% [complete] products to your state” or that “we will no longer offer parts for sale to residents of New Jersey due to order from the Attorney General’s Office of the State of New Jersey,” or they simply remove New Jersey from the available shipping addresses entirely. The Attorney General’s Office is providing examples of such disclosures alongside this release.

“We’re doing our part in New Jersey to keep our residents safe from the threat of ghost guns,” explained Attorney General Grewal. “I’m thrilled that New Jersey’s law and our cease-and-desist letters convinced fifteen companies to block ghost gun sales into our state. That makes New Jersey residents and law enforcement safer from the threat of these untraceable firearms. But the work is not over. For nearly all these companies, New Jersey is the only state they block. And we know that criminals and gangs can and do buy weapons in other states and traffic them into New Jersey. So today, I’m calling on Congress and other states to tackle ghost guns like we did. No one should get an untraceable ghost gun, especially not without a background check.”

According to the State’s complaint, U.S. Patriot Armory did not stop advertising ghost guns for sale and did not include any New-Jersey-specific disclaimers on its website in the wake of the Attorney General’s cease-and-desist letters.

The complaint alleges that on February 14, 2019, an investigator for the Division of Consumer Affairs – using an undercover identity – accessed the U.S. Patriot Armory website and purchased a ghost gun kit for the creation of an AR-15 assault rifle. The kit was delivered to an undercover New Jersey address earlier this month.

The State’s complaint alleges that U.S. Patriot Armory deceptively and unconscionably advertises, offers and sells ghost gun kits to New Jersey residents, without warning them that ghost guns are unlawful and subject the buyer to criminal prosecution. U.S. Patriot Armory specifically represents about some of its products, “Is it legal?: YES!,” and states that it could ship one kit “right to your front door with no [Federal Firearms License] required.”

The complaint also alleges that U.S. Patriot Armory’s website contains no disclaimer warning that (1) it is a third-degree crime in New Jersey, punishable by up to five years in prison, to purchase firearm parts with the intent to manufacture a gun without a serial number, or that (2) it is a second-degree crime punishable by five-to-10 years in prison to possess an unregistered assault firearm.