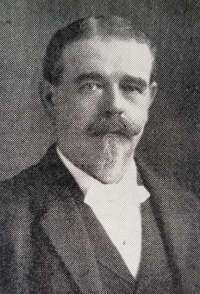 GLOUCESTER CITY, NJ--(Originally published 1964)--(CNBNewsnet)--William J. Thompson (aka The Duke of Gloucester) was born in County Derry, Ireland, October 15, 1848. His father was Patrick Thompson. Fourteen generations of the family were born in the same house.

William J. was 13 years of age when he emigrated to America. He landed in New York and then proceeded to Boston where he was employed in a store for a short time. He then entered a soda bottling establishment, and before leaving that place a few month later, he was given charge of the works. After a year spent in New York he came to Philadelphia and had charge of the billiard tables in the Continental Hotel, and later was made manager of the billiard room. In 1867 he entered the employ of Capt. Frank T. Osborne, a well-known restaurant proprietor, who soon placed him in charge of the business where he remained for two years.

He next became a barkeeper in the American House, and in 1869 opened a hotel on Chestnut Street which became famous as “The Hole in the Day” and was a great resort for politicians.

In 1872 he built the Thompson House at Third Street and River front (next to Buena Vista) and about this time leased the shad fishing grounds in the Delaware River. A little later he purchased these, together with the whole front of the Delaware River from Gloucester Ferry south to a point beyond Washington Park-a valuable fishing water front of three and a half miles.

In 1888 he purchased the Gloucester Ferry and built the Camden-Gloucester and Woodbury Street Railway. He developed Washington Park. He built and operated the race track from Labor Day, 1890, to Thanksgiving Day, 1893, when it was closed by an act of state legislature.

In his political affiliations Mr. Thompson was a stalwart Democrat and was the recognized leader of his party in this section of the state for many years. He served as a delegate to the national convention in St. Louis and Chicago when President Cleveland was nominated for the second and third times. In 1892 he was elected to the N.J. Legislature where he served for two terms. He served as a member of the board of freeholders from the second ward for 14 years. He served in city council for 17 years.

Mr. Thomson died July 2, 1911, while on a trip to his birth place in Ireland. His body was met in New York by undertaker Foley, who with the help of an expert embalmer from New York brought the body to South Street Ferry, where it was placed on the ferry boat Fearless and brought to Gloucester.

GLOUCESTER CITY, NJ--(Originally published 1964)--(CNBNewsnet)--William J. Thompson (aka The Duke of Gloucester) was born in County Derry, Ireland, October 15, 1848. His father was Patrick Thompson. Fourteen generations of the family were born in the same house.