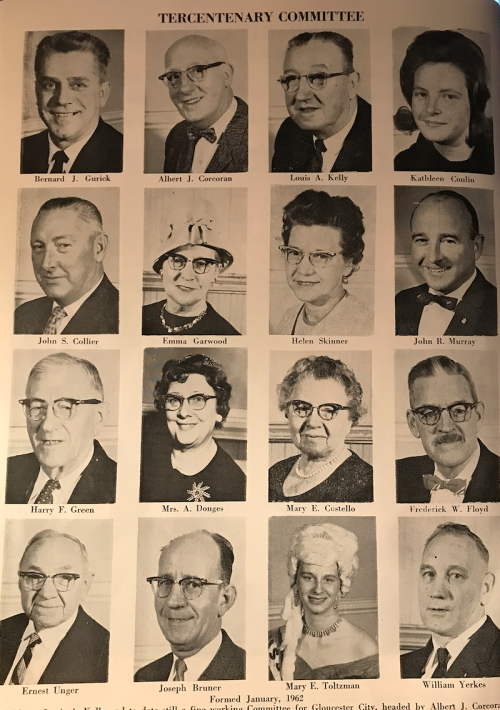 The Tercentenary Committee formed by Gloucester City Mayor Louis A. Kelly in January 1962

Sadly much of Gloucester City's early history, such as buildings and landmarks, has either been demolished or loss.

Over the next several days, CNBNews will be publishing some of those articles and photos for your perusal.

Gloucester City, originally a little fishing village whose natural resources and geographic situation were recognized early in the growth of our country, has developed into an outstanding industrial community.

The name Gloucester is borrowed from a Cathedral Town on the banks of the river Severn, in the west of England, whence emigrated some of the earliest settlers of West Jersey. The word itself is from the Celtic: “Glau Caer,” signifying “Handsome City.”

Shown on the map of New Jersey as a City of *18,000 inhabitants, Gloucester City is located in the southwestern section of the State, in the County of Camden. Her borders are washed by the tides of the Delaware River on the west, Newton Creek on the north, and Timber Creek on the south.

It is situated on slightly undulating ground, sufficiently elevated to insure good drainage, which is further assured by geological formation, a body of sand and gravel from 10 to 30 feet thick, resting on the stratum of clay. This with the broad and fast flowing river on the west, from which in summer prevailing cool breezes flow from the southwest.

Gloucester City is easy of access from the west by way of the Walt Whitman Bridge, the North South Freeway, Routes 295 and 130 pass through the eastern section, running north and south on which are located motels and restaurants.

Two branches of the Pennsylvania-Reading Seashore Lines, with freight spurs serve all the large manufacturing plants in Gloucester City.

The Tercentenary Committee formed by Gloucester City Mayor Louis A. Kelly in January 1962