By gostrum / Comments are Disabled 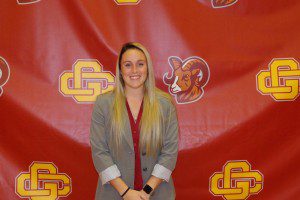 Carly, a 2013 GCHS graduate, was a 4-year softball and basketball letter-winner at Gloucester Catholic. She helped the Lady Rams softball team win the NJSIAA Non-Public State Championship in her freshman and sophomore years, earning MVP awards twice in her career.

A fleet outfielder, Carly enjoyed a stellar career at Rutgers University, starting 49 games her senior year and finishing with a .400-plus batting average for the Scarlet Knights. She earned a Bachelors of Science in Exercise Science and Sports Studies (Sports Management), graduating RU in 2017.

Mrs. McHenry ‘78, a former GCHS standout player who coached the Lady Rams to state championships in 2001 and 2003 as well as four South Jersey sectional titles, will serve as  assistant coach.

“Upon the resignation of former coach Rob Gussen, the school embarked on a search for a new coach,” said GCHS Athletic Director Pat Murphy. “We are delighted to have Carly, a GC standout and Division 1 softball player, as our new head coach. She brings enormous energy and commitment to the program. I’m also excited to have former head coach Julie McHenry as Carly’s assistant.”

As she steps into her new role, Carly is ready for the challenges of coaching.

“I’m thrilled to take over the Gloucester Catholic program and feel I will have a lot to offer the athletes here where I once played,” said Todd. “We have a great tradition in softball at GC, and we’ve already begun building a great coaching staff with Mrs. McHenry helping out the team.

“There is no doubt in my mind that we will continue our proud Lady Rams traditionstarting this spring.”

By gostrum / Comments are Disabled