Building at King and Monmouth 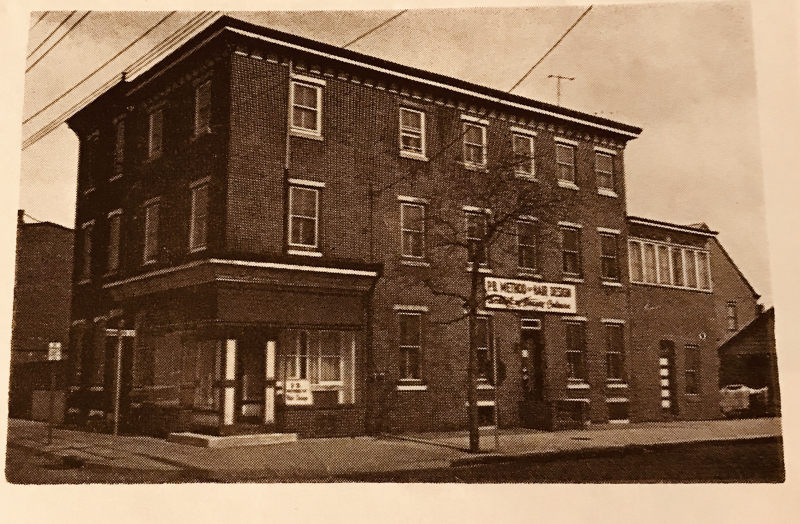 The three-story brick building now standing on the northeast corner of Monmouth and Kings Streets has an old historic background.

The first person known to occupy the building was Dr. Wm. C. Mulford who came to Gloucester in 1845. In addition to housing the doctor’s office it also served as the post office with Dr. Mulford as postmaster. The first bank was also located in this building.

The Gloucester City Reporter printed its first issue on November 15th, 1875. The office was over the bank building.

The first telephone central office was located on the 2nd floor in this building and Wm. J. Thompson had the first phone about 1890. The American Express Co. was also located here at this time.

In 1918 Wm. B. Hambleton Real Estate and Insurance Agency purchased the property and conducted business there until 1956.

Six years ago, the P&B method of hair design, School of Beauty Culture, under the ownership and direction of Peg and Bob Hogan, took over the building and are at present the owners and operators.

A clause in the deed prohibits the sale of alcoholic liquors on the promises and probably dates to the ownership by Dr. Mulford.

The original structure of the building has been changed by an addition on the back. The structure has also been reinforced and strengthened. There is a thick walled-in section in the cellar that could have been part of a vault used when the bank occupied the building.

The mortar used between the stones in the cellar wall was as hard as stone after 100 years. There was no cement at that early date. The method used in the slacking of lime, prior to the use of air slacked and bagged lime, used by stone mason, bricklayers and plasterers, was the cause of the hardness of the mortar.

CNB EDITOR'S NOTE: THIS HISTORICAL BUILDING ERECTED IN 1845 WAS DEMOLISHED A FEW YEARS; FOR A TIME IT WAS ALSO THE HOME TO P&B BEAUTY SCHOOL. ALL THAT IS LEFT TODAY IS A VACANT LOT.

The Gloucester City Library Association was incorporated under the laws of the State of New Jersey on June 2, 1925 and has been the sponsoring and governing body of the library since that time.

The Association was formed to establish and maintain public libraries and reading rooms for the use and benefit of the inhabitants of Gloucester City and elsewhere; to acquire by purchase, lease, construction or otherwise, buildings adapted and suitable for libraries and reading rooms. For the first several years of its existence the library was supported by gifts of books and money from the citizens of the community. After several years, money was received from the City Council of Gloucester City.

The library was first housed in the Stewart Building, Broadway & Monmouth Street, and moved to its present quarters in Municipal Building in March 1941. Miss Beatrice Purrington was the first Librarian. She was succeeded as librarian by Miss Josephine Carson in December 1929. In February 1937, Miss Eva Stites became head librarian. Miss Genevieve Whittington was appointed librarian on June 25, 1945. Miss Ellin Young became librarian in November 1946 and has been in this position since. Mrs. Ida May Gallagher is assistant librarian.

It was in the early part of 1935 that a small coterie of business and professional men became interested in furthering the ideals of service in their community; and it was these men who saw the need for the organization of a service club in Gloucester City-a historic community dating back to 1623.

The men were well aware of experiences which confronted them in organizing a service club.

Preliminary meetings were held in the office of Frank O. Stetser, with a dozen or so men attending the sessions.

At each meeting, and during the interims, much encouragement and cooperation was extended by members of the Rotary Club of Camden, resulting in the latter club becoming the sponsor.

The late Leroy A. Goodwin, a fellow townsman, and veteran member of the Camden Club, was named official representative and proceeded with organization details.

The organization meeting was held in the Stewart Building on April 25, 1935 and the Charter Night program took place in the old City Hall on May 22, 1935 with 23 Charter Members. At that time, our club was included in the old Fiftieth District, comprising Eastern Pennsylvania, New Jersey and Delaware, William Schneller, of Catasauqua, Pa. was District Governor. Our first president was Henry M. Evans, well known attorney, and veteran of two World Wars.

anniversary of the State of New Jersey (1664 to 1964). That year Gloucester City's Mayor and Council authorized a Tercentenary Celebration with a number of events planned to emphasized Gloucester City's rich history. In 1964 a 50-page booklet titled THE HISTORY OF GLOUCESTER CITY compiled by the Gloucester City Jaycees, with the help of the Gloucester City Historical Society was published and distributed to residents. The book contained historical photos and documents,  that began with the early history of the different Indian tribes that lived in and around Gloucester City.  Unfortunately many of the historical buildings that were still standing in 1964 have been demolished.  All that remains are vacant lots.

Building at King and Monmouth

The three-story brick building now standing on the northeast corner of Monmouth and Kings Streets has an old historic background.

The first person known to occupy the building was Dr. Wm. C. Mulford who came to Gloucester in 1845. In addition to housing the doctor’s office it also served as the post office with Dr. Mulford as postmaster. The first bank was also located in this building.