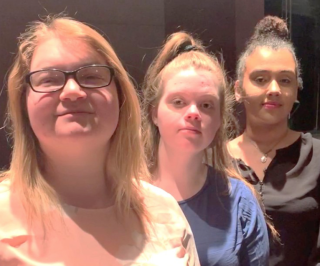 "And so it goes" A young female lawyer has been sent to the home of a ninety-two-year-old woman to sort out her finances. Frail, and perhaps a bit senile, the woman resists and is of no help. Along with the old woman's matronly paid companion/caretaker, the lawyer tries to convince her that she must concentrate on the matters at hand. In a beautifully appointed bedroom, the elderly woman prods, discusses and bickers with the younger women. Her long life is laid out for display, no holds barred. She cascades from regal and charming to vicious and wretched as she wonders about and remembers her life: her husband and their cold, passionless marriage; her son and their estrangement. How did she become what she is? Who is she? Finally, when recounting her most painful memory, she suffers a stroke. And then there is Act Two

The New York Times, writing in 1994, called Edward Albee's Three Tall Women "a new play so good it can only exist on the stage. A perfect illustration of why theater is an indispensable art." The New York Post agreed, calling Three Tall Women "extraordinarily brilliant" and "elegant", declaring it "the best, most forceful play [Albee] has given us" adding "to be truthful about death is admirable, but to be elegant at the same time is almost Mozartian." This past season, some quarter of a century after its American premiere, Three Tall Women received its long-deserved Broadway opening in glorious revival starring Laurie Metcalf, Glenda Jackson and Alison Pill.

The Elmira College Theatre production of Three Tall Women features Rachel Leben, Emma Faunce, and Julissa Garcia. The production is under the direction of John J. Kelly, with scenic design by Zoe Price and lighting design by George de Falussy. Scott McGuire serves as Technical Director, with Stage Management by Sadie Kennett, assisted by Lauren Scarborough and Zekiel Cammarata. Please note that the play contains adult themes and is not recommended for children.

All Elmira College Theatre productions are free and open to the public. Seating is first come, first served. Thursday, Friday and Saturday performances begin at 8:00 p.m., with matinees at 2:00 p.m. on Sunday.

Founded in 1855, Elmira College is a private, residential, liberal arts college offering 30-plus majors, an honors program, 17 academic societies, and 20 Division III varsity teams. Located in the Southern Finger Lakes Region of New York, Elmira's undergraduate and graduate student population hails from more than 20 states and nine countries. Elmira is a Phi Beta Kappa College and has been ranked a top college, nationally, for student internships. The College is also home to the Center for Mark Twain Studies, one of four historically significant Twain heritage sites in the U.S., which attracts Twain scholars and educators from around the world for research on the famous literary icon. Proud of its history and tradition, the College is committed to the ideals of community service, and intellectual and individual growth.