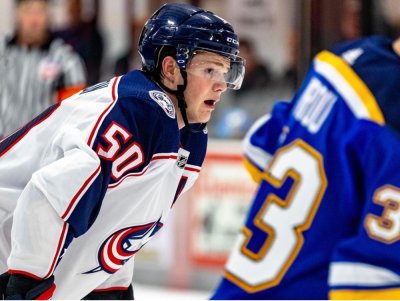 Rookie forward called up to Columbus on Monday

(December 31, 2018)--It took Eric Robinson the usual two hours and change to traverse Interstate 71 from Cleveland to Columbus on Sunday evening, but it didn't feel that long.

When he left, Robinson was a Cleveland Monster, a rookie in professional hockey grinding through his first full professional season. When he got to Columbus, the 23-year-old winger was an NHL player, and he was on the ice Monday morning for the Blue Jackets' pregame practice before the game against Ottawa.

The journey likely won't last long - he was called up to provide forward depth in the absence of Nick Foligno, who left the team to travel to Boston, where his daughter Milana is undergoing a scheduled heart surgery - but Robinson hoped to make the most of it.

"You never know how long (it will last), so you just take the opportunity, practice hard, play hard if you get the chance, and soak in as much as you can," Robinson said.

The fact Robinson was the one to get the call was a testament to his play with the Monsters. The Bellmawr, N.J., native had 10 goals and nine assists for 19 points in the team's first 33 games, carving out a niche on an AHL team that's a mix of seasoned veterans and hungry youngsters.

"He's been playing well," head coach John Tortorella said. "He brings us speed. … He's been one of their most consistent players."

Robinson didn't suit up in the Monday game vs. Ottawa but has already made his NHL debut. After concluding a four-year career at Princeton with a standout senior campaign that included 17 goals and 31 points in 36 games, he signed a two-year deal with the Blue Jackets last spring and played in the team's final regular-season game at Nashville.

Robinson said that experience, which included two shots on goal and a plus-1 rating in 11:21 of action, helped him acclimate this time around in his return to the Jackets.

"It's helped so much," said Robinson, who also attended the team's development camp this summer. "Just even with this call-up now, it's more comfortable coming up. I've been here. You're not quite as nervous as you are the first time doing anything, so that was huge. And it's also motivating to want to get back here."

With Cleveland, his goal has been to keep improving his overall game under head coach John Madden. He brings size at 6-2, 200 pounds to go with his speed, and his aim is to be a two-way player who can make an impact on both ends of the ice. To that end, he's listened as the coaching staff in Cleveland has worked with him to finish checks and play a more physical game.

As for the biggest adjustment to the pro level?

"I think it's the speed of the game," he said. "You don't have as much time as you used to. Guys are right on your back. You have to have that decision made in your mind before you get the puck."

At Cleveland, Robinson has leaned on veteran team leaders like Mark Letestu, Zac Dalpe and Nathan Gerbe to handle the highs and lows of his first pro season. While he has kept an eye on what's happening with the Blue Jackets and around the NHL, he's said he hasn't focused on whether a call-up would be imminent.

Instead, Robinson has just played his game and worked to improve each day.

"You have to come ready to work every single day improving on things," he said. "Taking note what the coaches and the staff are telling you what to improve on and really focus on that. It's different than college. It's a job now. You really have to focus on those things. You don't have to worry about class or anything else, you just have to worry about getting better every day."

Rookie forward called up to Columbus on Monday

(December 31, 2018)--It took Eric Robinson the usual two hours and change to traverse Interstate 71 from Cleveland to Columbus on Sunday evening, but it didn't feel that long.