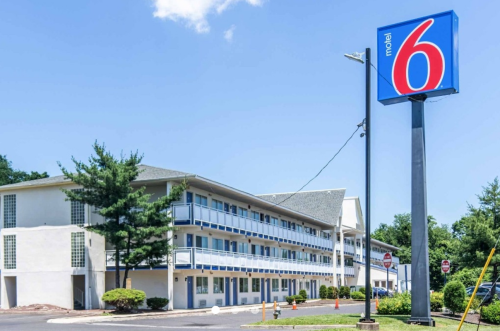 from the Camden County Prosecutors Office responded to a shooting Saturday night just before midnight at the Motel 6 property on Crescent Blvd. A nearby resident stated that she heard three loud bangs at approximately 11:40 PM. The noise came from the Motel 6 property she said.

Last night at approximately 11:57 PM, the Camden County Prosecutor’s Office and Brooklawn Police Department responded to reports of a man who was shot at the Motel 6 located at 801 Crescent Boulevard, and the shooter possibly still on scene. When police arrived, they located the victim, a 35-year-old man from Philadelphia, shot. He was transported to a nearby hospital and is currently receiving treatment.

Investigators were able to determine that the shooter fled the scene before police arrived.

The investigation into the shooting is ongoing, and no arrests have been made at this time.

Brooklawn resident Tom Hussey said he is fed up with the owners of the Motel 6 because of all the domestic and crime problems at the site. He is urging the public to sign his petition, titled Brooklawn Mayor and Council : Close Motel 6 that he plans on submitting to the governing body at their next public meeting.

"Motel 6, located at 801 Crescent Blvd in Brooklawn is a drain on our small towns resources. In just one month police were called to the motel 14 times. The incidents ranged from false fire alarm, outstanding warrant violations, trespassing, patrol violations, possession of narcotics, and possession of drug paraphernalia. More recently this motel has had multiple prostitution arrest, car thefts and just last night a shooting which has left a man with three bullet holes in his back and chest! This hotel is used to relocate section 8 Camden County residents for various reasons. This has left our small school with students who are technically homeless who don’t have to follow the schools attendance rules. Kids come and go as they please disrupting the class rooms and creating chaos in the school. As taxpayers and parents we deserve better. Please sign this petition so it can be presented at our next council meeting."   Click here to sign the document

from the Camden County Prosecutors Office responded to a shooting Saturday night just before midnight at the Motel 6 property on Crescent Blvd. A nearby resident stated that she heard three loud bangs at approximately 11:40 PM. The noise came from the Motel 6 property she said.