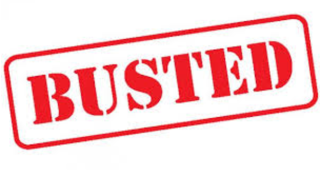 *Any charges are merely accusations and the defendant is presumed innocent until and unless he is proven guilty.