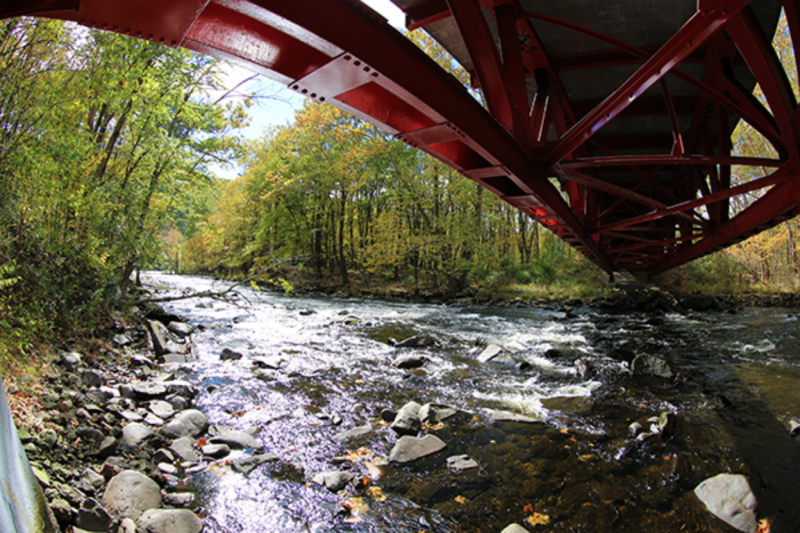 “I have been hiking, canoeing, and photographing the Delaware River since 1972 and love every trip,” said Kevin Haines of Brick, N.J.  “I appreciate the DRBC hosting this photo contest that features one of our most beautiful natural resources, the Delaware River.”

The winning image was chosen by a judging panel of four DRBC staff members and will be featured on the commission’s website at https://www.nj.gov/drbc/basin/photo/photo-contest.html and on DRBC’s Twitter, Instagram, and Flickr social media sites.  The photo will also be published in the commission’s 2018 annual report, and the winner will receive a certificate of recognition.

“We thank everyone who entered this season’s photo contest,” said DRBC Executive Director Steve Tambini. “While there were many great entries to choose from, Kevin’s photo stood out for its juxtaposition of the red metal bridge with its natural surroundings, a unique perspective that enhances the photo’s composition of a landscape transitioning to fall.”

The purpose of DRBC’s seasonal photo contest is to highlight amateur and professional photography representing the beauty, diversity, function, and significance of the water resources of the Delaware River Basin, a 13,539-square mile watershed.  In legislation signed into law in December 2016, the U.S. Congress declared that “the Delaware River Basin is a national treasure of great cultural, environmental, ecological, and economic importance.”  Approximately 15 million people (or about five percent of the nation's population) rely on the water resources of the Delaware River Basin to support a variety of significant uses including public drinking water, industry, agriculture, power generation, recreation, fisheries, and aquatic life.

The Winter Photo Contest will begin on December 21 and has a deadline of February 15, 2019.  Complete contest details, including instructions on how to submit photographs, are available on DRBC’s website at the above link.

To learn more about the commission, please visit www.drbc.gov