Giving thanks during the darkest chapters in life 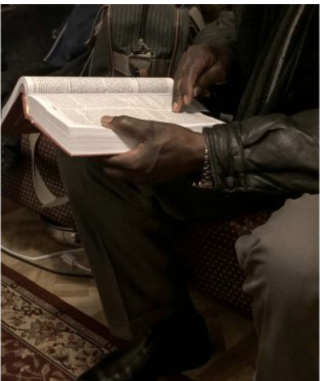 Isaac Wilson’s hands clasped tightly as he kneeled and bowed his head in prayer this past weekend at Mass. He wore his best suit. He made sure he had his offertory donation ready for the collection. He nodded intently during the homily. He prayed.

“I was giving thanks,” the native Ugandan later said. “For my family. For my life. For this country. For the Church.”

Pausing, he curiously asked, “What does the Thanksgiving holiday mean? Why is it only one day?”

It’s a reasonable question, coming from a Catholic Charities client who, as described by program director Patrick Barry, “is the one of the most appreciative, faith-filled, and grateful people I know. He is always expressing how thankful he is, never once complaining, despite his situation.”

Isaac speaks in a calm voice with a slight accent, always choosing his words thoughtfully and purposefully. When he comes to Catholic Charities for appointments, he happily and humbly greets staff and volunteers with a firm handshake and a beaming smile, often saying, “Hello my brother,” or “Hello my sister.” He ends most conversations with, “Thank you. May God bless you.”

The 61-year old has a thin frame and stands tall with a slight hunch. He walks and talks with a level of serenity that – to those who know his story – is otherworldly.

Almost five years ago, Isaac was living comfortably in Uganda with his wife and five children. He earned a degree in business, provided for his family, was an active member of his church. He owned a large property and farm. It was a comfortable and happy life.

But, for Isaac, his principles triumphed over his comfort.

As a member of a large opposition party – Isaac served as a mobilizer. The party – known for taking a stand against the government’s political corruption, suppression of speech, and human rights violations – advocates for democracy and espouses the dignity of the human person, social justice and equal opportunity, among other principles.

It was his commitment to these ideals that ultimately led him to flee his country as a refugee if he wanted to stay alive.

“I was blessed with a very fortunate life,” he explained. “But not everyone in my country was so lucky.”

His voice didn’t change when he talked about the night that changed everything.

He was ultimately granted asylum to the United States through the UNHCR (the United Nations Refugee Agency) after a long three years. According to his Catholic Charities case manager who picked him up from the airport last year, “Isaac had nothing with him except his paperwork and a suit that that was several sizes too big. He used to be able to fit in it. But I’ll never forget his smile…he was just beaming. He was just so happy to be here and to be alive.”

Isaac found work within two weeks of his arrival through a job fair at Catholic Charities, and now works full-time overnight shifts at Walmart.

At the top shelf in his tiny but organized apartment, he keeps two things: a weathered Bible with folded pages marking his favorite passages, and a photo album. He lifted the beige photo album from the shelf as if it were made of glass, and his usual calm tone shifted to one of excitement, as he thumbed through the album, careful to not leave fingerprints on the photos.

He excitedly showed pictures of his family, whom he hasn’t seen for five years now. His wedding day; his wife, holding their first-born baby in her arms; his children’s first communion pictures and their awkward smiles; all of his children in their younger years on their first day of school, with facial expressions ranging from tears to glee; his oldest daughter’s bright, beaming smile, eerily similar to his own. “She graduates college in January,” he said proudly, pointing to her. “She’s studying human rights.” He showed photos of the place he used to call home, a large house amid a wide field of green trees. In the foreground stood his wife, laughing in a long, colorful dress.

Despite receiving the devastating news that his family members – who were supposed to arrive this year to the U.S. – were told that their arrival is now indefinite due to certain policies implemented by the current administration, he remains hopeful – and prayerful.

Though he misses them terribly, his optimism and gratitude have not diminished. “I am so lucky that they are happy and healthy. I send them most of the money I make. And since I work overnight shifts, I can talk to them on WhatsApp during the day. I am so lucky that I can talk to them every day,” he said. “And I am blessed to be in this country where I am safe. I am thankful to be alive. And I know that I’ll see them again one day.”

He paused for a moment before standing up and carefully closing the album and placing it back on the shelf. Reaching for his Bible, he thumbed through his bookmarks, saying, “Please – before you go – pray with me. Let us give thanks for this day.”

*Client’s name has been changed to protect him and his family.

Giving thanks during the darkest chapters in life
Posted By: Maria Latest News

Isaac Wilson’s hands clasped tightly as he kneeled and bowed his head in prayer this past weekend at Mass. He wore his best suit. He made sure he had his offertory donation ready for the collection. He nodded intently during the homily. He prayed.

“I was giving thanks,” the native Ugandan later said. “For my family. For my life. For this country. For the Church.”

Pausing, he curiously asked, “What does the Thanksgiving holiday mean? Why is it only one day?”