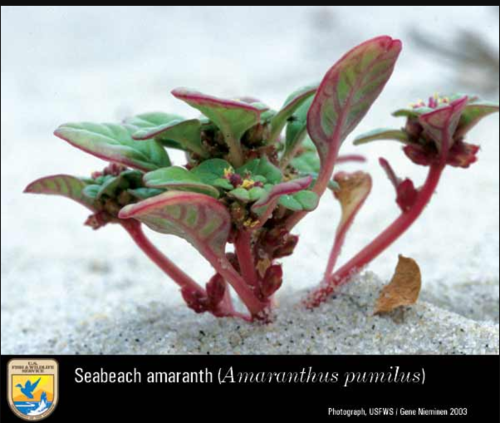 The biologists' annual census counted 1,053 seabeach amaranth plants, an increase of 91 percent compared with the 550 plants counted last year. The reasons behind the surge are unclear but may be in part due to transportation along ocean currents of long-lived seeds from other areas coupled with the efforts of DEP partners in helping to protect the species' habitat.

"This significant increase is a testament to nature's resilience as well as to the great deal of nurturing by people who care about the ecological health of our beaches," Commissioner McCabe said. "The increasing numbers of this very rare plant reminds us that, as important as our beaches are for recreation, we must be mindful of the plants and wildlife that depend on this fragile environment."

Native to Atlantic coastal beaches, seabeach amaranth (Amaranthus pumilus) is a low-growing annual with fleshy stems and clusters of spinach-like leaves. Growing along beaches from the base of dunes to the high-tide line, its primary threat is from disturbances such as recreational use, beach raking and off-road vehicle use.

The seabeach amaranth is one of only six plants in the state that are listed as either federally endangered or threatened. It is the only federally listed plant species found on New Jersey's beaches.

Other state endangered or rare plants that grow in the same narrow band of beach habitat in New Jersey include seabeach sandwort and seaside knotweed. Shorebirds such as the federally threatened piping plover and state-endangered black skimmer and least tern nest in this habitat.

This year, biologists from the DEP's Natural Heritage Program within the Division of Parks and Forestry surveyed some 140 miles of beaches from South Amboy on Raritan Bay to Higbee Beach Wildlife Management Area on Delaware Bay, except for the Gateway National Recreation Area in Monmouth County. The survey found 647 plants in Monmouth County and 404 in Ocean County. Single plants were found in Atlantic and Cape May counties.

The plant's waterproof and buoyant seeds are dispersed by wind and waves. Since the seeds are also long-lived, they may travel miles along ocean currents and then wash up and take hold along distant beaches. Based on this specialized adaptation to the dynamic coastal environment, seabeach amaranth is considered a "fugitive" species.

Results from this year's survey have been shared with biologists from the Conserve Wildlife Foundation of New Jersey and the U.S. Fish and Wildlife Service, which work with municipalities to develop beach management plans that protect habitat for sensitive plant species.  The DEP also uses survey results when issuing beach and dune maintenance permits to municipalities.

To help protect the fragile habitat of seabeach amaranth and other beach plant species, biologists and volunteers from Raritan Valley Community College in Somerset County and the Pinelands Preservation Alliance, supported by the DEP, have been marking special protection zones known as plant protection strips along dunes. These areas are simply marked with stakes, strings and signs to alert the public to the presence of a protected area along the base of dunes.

These zones deter vehicle traffic and other disturbances along upper beaches. They have proven successful with seabeach amaranth, seabeach sandwort and seaside knotweed, all of which have colonized recently protected areas. Healthy populations of plants such as these can help naturally make beaches more resilient by holding sand in place during storms, particularly in front of dunes that provide critical protection to property.

In 2008, the first plant protection strips were marked at Island Beach State Park, the longest stretch of undeveloped barrier island-type ecosystem in the state. This initial project demonstrated the promise of protecting rare beach plant species without limiting public access to beaches. Due to this success, biologists set up more plant protection strips in the park in 2016.

"Island Beach State Park has never supported more than 25 seabeach amaranth plants during a single growing season, so we were absolutely thrilled when this year's survey found 307 plants," said Division of Parks and Forestry Director Olivia Glenn. "At Island Beach, it's rather clear that natural forces, possibly movement of seeds by nor'easters, coupled with protection of habitat is leading to a resurgence in beach plants at the park."

"New Jersey's beaches experience extensive human activity and disturbance," said State Forester John Sacco. "But research shows that we can balance the needs of rare coastal plant species and the needs of beachgoers, since people tend to use the part of the beach closest to the ocean and rare plants are found closer to the dunes."

In 1802, botanist C. S. Rafinesque first discovered seabeach amaranth from material collected in New Jersey. The plant was later found on beaches from Massachusetts to South Carolina. In 1913, botanist Bayard Long collected the plant from what is today Island Beach State Park but that was the last sighting of seabeach amaranth for almost a century. The plant was considered lost from New Jersey.

But in 2000, biologists with the Army Corps of Engineers and the U.S. Fish and Wildlife Service rediscovered the plant near Sandy Hook, part of the Gateway National Recreation Area in an area where beaches had recently been rebuilt and widened for coastal storm protection and recreation.

Its return was likely the result of storms transporting the seed from nearby beaches on Long Island, New York, where the species had similarly reappeared after a prolonged absence. But it is also possible that viable seeds long buried offshore was pumped onto the beaches and germinated.

Since 2001, the DEP has conducted annual coastal surveys for seabeach amaranth and several other rare plant species using U.S. Fish and Wildlife Service grants. In 2002, the survey found more than 10,000 plants. In any event, the numbers dipped precipitously in subsequent years, falling to just two plants statewide in 2013, likely a result of Superstorm Sandy the previous fall.

For a fact sheet, information on plant protection strips and other information, visit https://urldefense.proofpoint.com/v2/url?u=https-3A__www.fws.gov_northeast_njfieldoffice_endangered_amaranth.html-23photos&d=DwIFAg&c=4BTEw-1msHjOY4ITcFLmDM6JB8x6ZgbU2J24IH0HZLU&r=iueBpumbcWxXGLDcc8TRdAzcDSuAfWiymRT_wlyB9Fs&m=0kdA8JqcVlZ6gChC2J50jVdVQfOoJYSDkDbxdZY6EfY&s=KmqnlDYY3ZOxt9ei4i0tALLbrFF7T5p4dpbd2kBWjqo&e=