A Record Number of Women Will Serve in Congress

Results: Women Candidates in the 2018 Elections 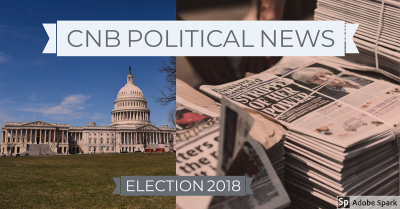 *For the most up-to-date figures, see our 2018 election tally. To see this release in pdf form, click here.
A record number of women will serve in the U.S. Congress in January 2019, according to Center for American Women and Politics (CAWP), a unit of the Eagleton Institute of Politics at Rutgers.
In the 116th Congress, at least 123 women will serve overall, increasing the percentage of women in Congress from 20% to 23% at minimum. That includes the 118 (100D, 18R) women who have already been declared winners, as well as guaranteed seats for women in all-female contests in the House (4) and Senate (1) that have yet to be decided.
With one gubernatorial contest still undecided, at least 9 (6D, 3R) women will serve as governors in 2019, including 1 (1D) woman of color. Stacey Abrams (D), who would be the first Black woman governor, is still contesting her race in Georgia.
The freshman class of women in the House of Representatives in 2019 will be the largest ever with a minimum of 32 non-incumbent women elected. 31 (30D, 1R) non-incumbent women have already won and 13 (9D, 4R) more are in undecided contests. The previous high was 24, set in 1992.
"We've seen important breakthroughs, particularly in the U.S. House," said CAWP Director Debbie Walsh, "but deepening disparities between the parties in women's representation will continue to hobble us on the path to parity. We need women elected on both sides of the aisle."
U.S. Senate
12 (10D, 2R) women have already won races for the U.S. Senate. When combined with the 10 women already serving from other Senate classes and the guaranteed pick-up for a woman in Arizona's undecided senate contest, the 116th Congress will see at least 23 women serving in the Senate; 16 Democrats and 6 Republicans have been selected already. This matches the previous record of 23, set in 2018. One race remains undecided in Mississippi, where Senator Cindy Hyde-Smith (R) will compete in a runoff; her success would yield a record level of women in the U.S. Senate.
Incumbent Senator Mazie Hirono (D-HI), who was re-elected this year, was the only woman of color nominee for the U.S. Senate. Four women of color will serve in the U.S. Senate in the 116th Congress, the same number as in the 115th.
Two states will send their first women to the U.S. Senate in 2019: Arizona (Kyrsten Sinema or Martha McSally) and Tennessee (Marsha Blackburn), bringing the number of states who have never had a woman senator down to 18.
U.S. House
At least 100 women won races for the U.S. House and will serve in the 116th Congress, a new record. The previous record number of women serving in the House was 85, set in 2016. While there will be a record number of Democratic women serving in 2019 (at least 84 vs. previous record of 63), there will not be a record number of Republican women in the House next year. In fact, the number of Republican women in the U.S. House will likely drop between 2018 and 2019, while the number of Democratic women in the House will increase by at least 21 next year. Thirteen races with 17 women candidates remain undecided.
*Challengers (nominees who defeated incumbents) are italicized. All other women listed won open seat contests.
There will be a record total of at least 40 women of color in the House. Of the women of color already selected, 21 (21D) are Black women, 10 (10D) are Latinas, 6 (6D) are Asian/Pacific Islander women, 2 (2D) are Native American women, and 1 (1D) is a Middle Eastern/North African woman. The previous high was 34. The number of non-incumbent women of color elected in 2018 is already a record high; at least 11 (11D) new women of color will enter the 116th Congress, up from a previous record of 6 (first set in 2012). The new House members include 4 (4D) Black women (Hayes, Omar, Pressley, Underwood), 4 (4D) Latinas (Escobar, Garcia, Murcarsel-Powell, Ocasio-Cortez), 2 (2D) Native American women (Davids, Haaland), and one Middle Eastern/North African woman (Tlaib). 6 (3D, 3R) women of color candidates remain in races that are too close to call.
Iowa elected their first women to the U.S. House in 2018. In 2019, four states will have never sent a woman to the U.S. House: Alaska, Mississippi, North Dakota, and Vermont.
In addition, 2 non-voting delegates from Washington D.C. and the U.S. Virgin Islands were re-elected this year. One race is still too close to call. All of the women delegates serving in the 116th Congress will be women of color.
Governor
9 (6D, 3R) women have already won races for governor in 2018, matching the previous record number of women governors serving simultaneously, in both 2004 and 2007. The current number matches the previous high for Democratic women governors serving at the same time, but falls short of hitting the record for Republican women governors serving together (3 vs. previous record of 4). One race with a woman nominee remains undecided in Georgia.
Three states elected their first woman governors in 2018: Maine, South Dakota, and Iowa (where incumbent Governor Kim Reynolds was previously appointed). In 2019, 20 states will remain that have never had a woman governor.
In addition, 48 (27D, 20R, 1NP) women won other statewide elected executive offices this year. 14 races remain undecided.

A Record Number of Women Will Serve in Congress
Results: Women Candidates in the 2018 Elections

*For the most up-to-date figures, see our 2018 election tally. To see this release in pdf form, click here.
A record number of women will serve in the U.S. Congress in January 2019, according to Center for American Women and Politics (CAWP), a unit of the Eagleton Institute of Politics at Rutgers.