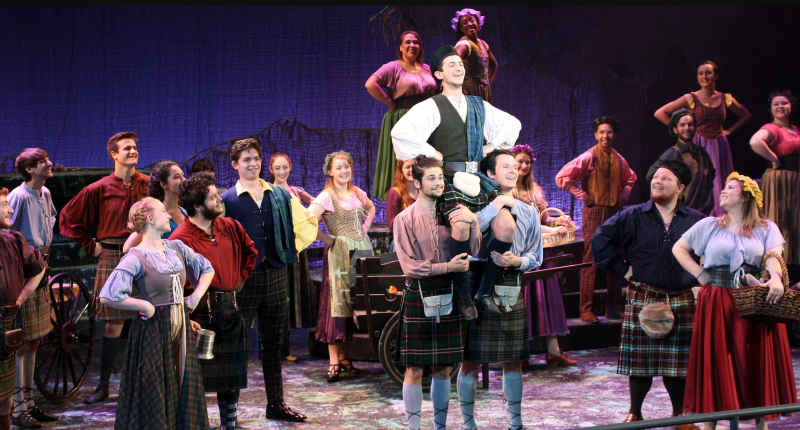 Forty-five Muhlenberg College students are in the cast of 'Brigadoon,' running Oct. 26 - Nov. 4.

ALLENTOWN, PA -- The mystery and magic of the Scottish highlands comes out of the Golden Age 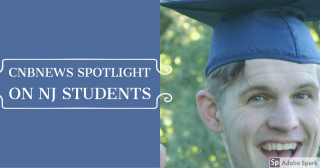 of musical theater and onto the Muhlenberg College stage this fall as Muhlenberg theatre & dance presents Lerner and Loewe's Brigadoon, Oct. 26 - Nov. 4.

Fourty-five Muhlenberg students are performing in the production including:

"The show is unabashed romanticism," says Muhlenberg theater professor Charles Richter, who directs the show. "It's a grand, moving tale of lost love. It's musical theatre on the grandest scale."

In Lerner and Loewe's 1947 breakout hit musical, two American tourists happen upon a Scottish village that is only visible once every hundred years. Brigadoon, the town, is beautiful, welcoming and just a little bit magical.

"Brigadoon is interesting-it blends music and dance in a very unique way," Richter says. "People are going to be stunned by the quality of the talent, by how well this cast can serve that unique blend."

"It's gorgeous," says Julian Mone '19, who plays American adventurer Tommy Albright. "From the ten-part harmonies of a gigantic, beautiful score, to the full-scale ballets and big sung numbers, it's just gorgeous.

"Shows like this aren't made anymore, and to get to see such a huge production from a dance, vocal and acting perspective is a rare opportunity," he says.

The cast of Muhlenberg students has been working hard to create the dreamlike, magical town of Brigadoon, Richter says. Theater professor Troy Dwyer serves as dialect designer, ensuring that the cast's accents are authentically Scottish.

"Scenic designer Curtis Dretsch has come up with an ingenious design that really accentuates the dreamlike quality of the piece," he says. "We also have a 21-piece professional orchestra, which you need because of the lushness of the musical arrangements."

Magically suspended in time, the town of Brigadoon offers a sanctuary from the pressures of modern living. When the Americans stumble upon it, they become infatuated with the town and its inhabitants-and they must decide before it's too late whether to stay or bid Brigadoon farewell forever. Brigadoon is the escapist fantasy we all need right now, says Cheyanne Leid '20, who plays Fiona MacLaren, the show's romantic lead.

"The town elder, Mr. Lundie, says that a lot of folks would like a Brigadoon of their own," Leid says. "And I think that, you know, a lot of people would. 'Brigadoon' is so family-oriented. It's full of so many different kinds of love, and I think we could all use some of that."

Brigadoon plays Oct. 26 - Nov. 4. Showtimes are Thursday through Saturday at 8 p.m., and Sunday at 2 p.m, with an additional 2 p.m. matinee on Saturday, Nov. 3. Regular admission tickets are $22. Tickets for youth and LVAIC students and staff are $8.

Tickets can be purchased online at muhlenberg.edu/theatre or by phone at 484-664-3333. Performances are in the Empie Theatre in the Baker Center for the Arts, Muhlenberg College, 2400 West Chew St., Allentown.

Founded in 1848, Muhlenberg is a highly selective, private, four-year residential, liberal arts college located in Allentown, Pa., approximately 90 miles west of New York City. With an undergraduate enrollment of approximately 2200 students, Muhlenberg College is dedicated to shaping creative, compassionate, collaborative leaders through rigorous academic programs in the arts, humanities, natural sciences and social sciences as well as selected pre-professional programs, including accounting, business, education and public health. The College is affiliated with the Evangelical Lutheran Church in America. A member of the Centennial Conference, Muhlenberg competes in 22 varsity sports.

Forty-five Muhlenberg College students are in the cast of 'Brigadoon,' running Oct. 26 - Nov. 4.

ALLENTOWN, PA -- The mystery and magic of the Scottish highlands comes out of the Golden Age

of musical theater and onto the Muhlenberg College stage this fall as Muhlenberg theatre & dance presents Lerner and Loewe's Brigadoon, Oct. 26 - Nov. 4.

Fourty-five Muhlenberg students are performing in the production including: