The joy of graduation day 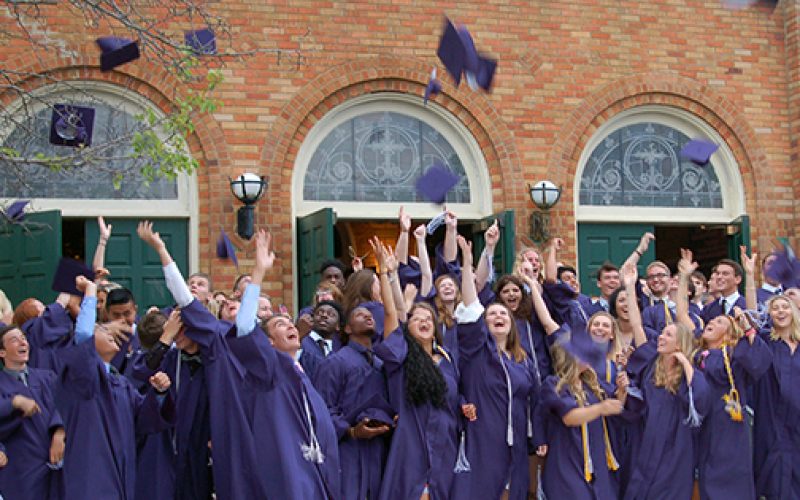 Amid loud cheers and a few tears, the Class of 2018 has crossed the finish line. Nearly 1,200 young adults graduated from six diocesan and three private South Jersey Catholic secondary schools during this first week of June.

“Our spiritual lives do not stop here,” said Holy Spirit senior class president Michael Waszen, Jr. in his baccalaureate welcome address. “We must grasp what we have learned and allow it to guide us as we travel down the new, individual paths we have chosen, whether that be college, military or the workforce.”

Bishop Dennis Sullivan presided at the baccalaureate Mass for each of the six diocesan high schools. Reflecting on the covenant Jesus made by shedding his blood, offering new access to God in Christ, Bishop Sullivan assured the graduates, “Your life is not without meaning. Your life is bound and totally mixed up with God.”

He invited graduates to be “artisans of the common good,” a term used by Pope Francis to describe people he believes have the most influence on society.

“Those who through normal, everyday gestures like being kind in public places, and those who are attentive to the elderly and poor, they are the most influential in the world,” paraphrased the bishop. “They know that God is mixed up with them,” he added.

Bishop Sullivan also referenced the pope’s observation that artisans of the common good reflect their values even in the way they drive, asking, “How would Jesus drive?”

He held up Loyola University, Chicago’s Sister Jean as an artisan of the common good. “It wasn’t the player who scored the most baskets. It wasn’t the coach who set records for his team. Who was the star of that show? Sister Jean Delores Schmidt, the chaplain of the Loyola Ramblers,” said Bishop Sullivan.

Sister Jean, 98, who uses a wheelchair, offers spiritual guidance on and off the men’s basketball court. She is also chaplain in the dorm where she lives with 400 Loyola students.

Bishop Sullivan praised the Class of 2018 for the way they responded to the tragic shootings in Parkland, Florida. He said it was a great moment in his life when he gathered student leaders in February to help develop the response from Catholic schools. He complimented students for staging prayerful walkouts, showing their faith and respect for Parkland victims.

“I’ve witnessed the stuff you are made of,” he said. “I have to say you’ve made me very proud. … You did a Catholic thing. You showed that the Class of 2018 are artisans of the common good.”

Citing the disturbing number of school shootings that have occurred nationwide during the class of 2018’s four years of high school, he further expressed his confidence that “in the Class of 2018 there are artisans of the common good who will do something to deliver our society once and for all from this madness.”

After thanking parents and guardians for the sacrifices they made for their children’s Catholic education, the bishop reminded graduates to live virtuous lives, never forget that they have a covenant with Jesus and, as artisans of the common good, to drive as Jesus would drive.

Amid loud cheers and a few tears, the Class of 2018 has crossed the finish line. Nearly 1,200 young adults graduated from six diocesan and three private South Jersey Catholic secondary schools during this first week of June.