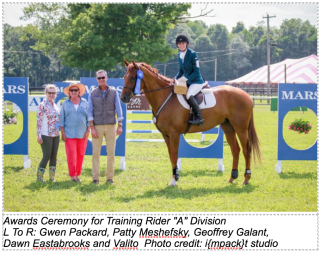 Far Hills, New Jersey - June 25, 2018 - The tradition continued at the Mars Essex Horse Trials with the successful revival of the second competition following a 19-year absence. This June also marked 50 years since the event was founded by the Haller Family at their Hoopstick Fam.
"We couldn't be happier with how everything went with this year's event," said Ralph Jones, co-organizer of the Mars Essex Horse Trials. "The turnout we got from the riders and the support we received from the local community is everything we could have hoped for. Our plan is to continue to build on the tradition of the Mars Essex Horse Trials and this year was another great step forward."
Mars, Inc. played a significant role in the success of the renewed event. They signed on as the title sponsor in 2017 and continued their generous support again this year. Mars Equestrian Director Geoffrey Galant was on hand to assist with the awards.
"The event is wonderful. Ralph, Morgan, Guy and their whole team have done an amazing job bringing this event back to life," said Galant. "As a company we are honored to be a sponsor. We manufacture products for horses, pets and people and this event brings all those elements together in one place. New Jersey is the home state of our confectionary business, our headquarters is located here. I can't think of a better way to honor and give back to the community than by sponsoring this event."
In 2018, six divisions were held each day with the $20,000 Preliminary Essex headlining the Trials. Australia's Ryan Wood led the competition from start to finish capturing the win on Ruby, owned by Summit Sporthorses Ltd. Saturday's other contests included two additional Preliminary divisions, Novice Open and Novice Rider divisions.
Sunday's lineup featured Open Training, Training Rider "A" and "B" divisions as well as three Beginner Novice divisions. Nicole Marcantonio and Guinevere took top honors in Beginner Novice "A" division. Tara Astacio won the Beginner Novice Rider "B" division on Money to Burn and Elizabeth Stewart took home the blue ribbon in the Open Beginner Novice division on Speedy P.
In the Training Divisions, Dale Eddy and Poker Run won Open Training, capturing the lead in dressage and adding only 1.20 time penalties in cross country to finish with a three-phase score of 28.90. The massive Training Rider "A" division was won by Dawn Eastabrooks and Valito. The pair took the lead in dressage with a score of 30.50 and defeated 28 other horse-and-rider combinations going clear in both cross country and show jumping to finish on their dressage score.
"It was amazing. I have had Valito since he was four years old and he's 13 now. We did not always have a successful run, but today he showed his true potential. I always knew he had it in him," said Eastabrooks. "It meant everything to win. It was the best day of my life other than having my children. I couldn't have done it without the help of my trainers Meg Kepferle and Corey Edwards. It was a magical day."
Donna White and High Stakes also felt the magic of the afternoon winning the Training Rider "B" division. The pair finished fourth in last year's Mars Essex Horse Trials.
"It was nice to come back and win. The course rode great, it was one of the more challenging ones and it rode really well," said White. "This event is so well done. The property is beautiful and it's so nice to have such a great event right in your backyard. We'll definitely keep coming back."
Morgan Rowsell, the Mars Essex Trials cross country course designer and co-organizer, is counting on that.
"It was a great follow-up to last year. We're getting better and better every year," said Rowsell. "To bring an event like this back takes a herculean effort and I'm positive that with the support we have from the community, Moorland Farm, and the Far Hills Racing Association, the sky is the limit."
In addition to exciting competition, spectators at the Mars Essex Horse Trials also enjoyed family friendly activities on Sunday. The Tewksbury Foot Bassets ventured out of the arena allowing fans to get "up close and personal" which was extremely popular. Another crowd pleaser was the Classic Car Show featuring stunning vehicles from various decades.
Proceeds from the event benefit the Greater Newark LifeCamp in nearby Pottersville, which provides an enriching day camp experience for approximately 300 Newark-area youths per day for six weeks during July and August.
For complete results click  here
About Essex Horse Trials
For three decades, the Essex Horse Trials was one of the highlights of the equestrian calendar, attracting top American and international competitors as well as thousands of fans who enjoyed its social aspects as well. The event was originally conceived in 1968 as a competition for young riders. Proceeds from the event benefit the Greater Newark LifeCamp in nearby Pottersville, which provides an enriching day camp experience for approximately 300 Newark-area youths per day for six weeks during July and August.

Far Hills, New Jersey - June 25, 2018 - The tradition continued at the Mars Essex Horse Trials with the successful revival of the second competition following a 19-year absence. This June also marked 50 years since the event was founded by the Haller Family at their Hoopstick Fam.