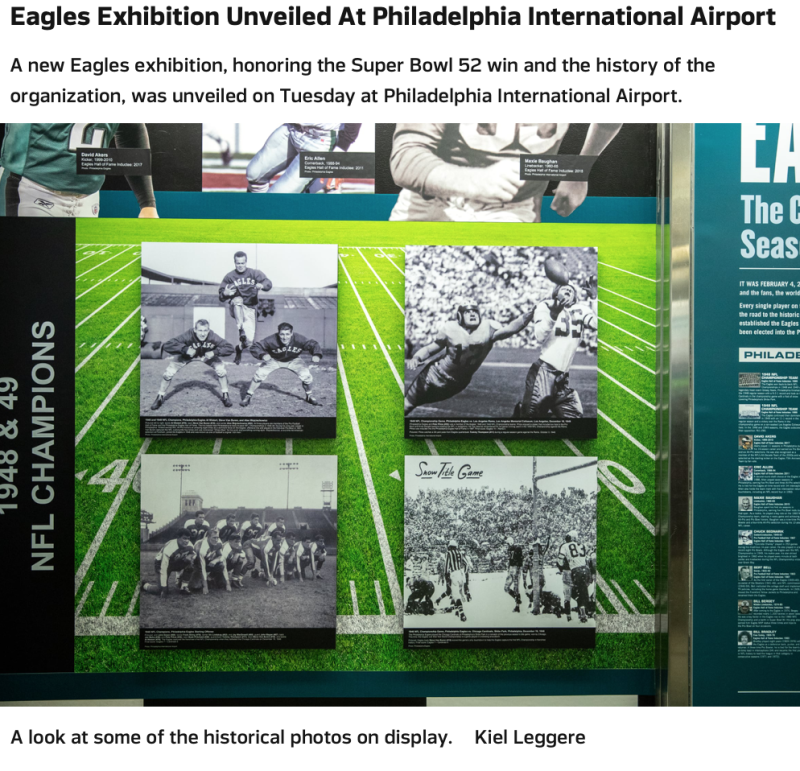 PHILADELPHIA PA (June 30, 2018)(CNBNewsnet)--A new Eagles exhibition, honoring the Super Bowl 52 win and the history of the organization, was unveiled on Tuesday at Philadelphia International Airport.

The idea, says Chellie Cameron, Philadelphia International Airport’s chief executive officer, is to show off the pride of the city. As an estimated 30 million travelers walk through the airport over the course of the next 12 months at a rate of 81,000 per day, those who go through Terminal A-East are going to see the pride loud and clear and in three-dimensional Midnight Green with the 2018 Welcome America Exhibition – Philadelphia Eagles: The Championship Seasons.

“I want them to feel as excited as we all are about this Championship,” Cameron said on Tuesday as the exhibition was unveiled to great pomp and circumstance … and with the Lombardi Trophy and Super Bowl Championship Rings present for photo opportunities and with SWOOP and the Eagles Pep Band and Eagles Cheerleaders on hand to celebrate the occasion. “It’s a source of pride with the city, and I really want to share that with everybody that comes through. We want to give our travelers a sense of the sounds and the sights of Philadelphia and what it’s like to be here.”

Philadelphia Eagles: The Championship Seasons is a collection of nearly 100 photos that depict, in lively detail, the 2017 season that was. The Eagles won the Super Bowl, making history in the process, and the airport, in its 11th year with a grand exhibition that speaks volumes about Philadelphia, went all in. In collaboration with the Eagles, who provided many of the photos and the editorial accompanying the images, Philadelphia Eagles: The Championship Seasons also includes a look back at the franchise’s NFL Championships of 1948, 1949, and 1960, and notes all of the members of the team’s Hall of Fame.

But the central theme is the one looking back at 2017 and the Super Bowl run, including the epic Parade of Champions.

“We are privileged to be part of Philadelphia International Airport’s award-winning photo exhibit,” said president Don Smolenski. “Philadelphia International Airport has long been an iconic staple of our region, providing world-class service for passengers traveling around the world. We take great pride in representing our city and are thrilled with this unique opportunity to showcase our team’s history through the airport’s nationally recognized photo display.”

This is the kind of thing that is happening all around Philadelphia and the region five months after the Eagles defeated the New England Patriots, 41-33 on February 4 in Minneapolis. While the in-team moments – the Lombardi Trophy being housed at the NovaCare Complex, the Super Bowl Championship Ring Ceremony, for example -- have been beyond special, so have the times when the community and the fans have responded and shared in the thrill of ultimate victory.

The Eagles have wrapped up their program involving every Season Ticket Member with a photo opportunity alongside the Vince Lombardi Trophy. Events like the Eagles Autism Challenge and the 2018 Football Festival For Women where amazing successes. Fans and businesses and communities have celebrated in their own ways, too, a perfect example of the impact sports success has regionally.

“I think it’s taken a chip off our shoulder,” Philadelphia Mayor James Kenney said on Tuesday as the event concluded. “Obviously, it was wonderful when the Phillies won the World Series in 2008, but we’ve waited our entire lifetimes for this. We’ve experienced excitement and disappointment, playoffs and no playoffs and now we’re the World Champions. The Eagles were destined to win it this year with everything that happened to them and with the way it all played out. It was sensational. It’s still being felt every day.

“I just think that people are happier when the Eagles win. They want to help each other. They love each other more.”

Kenney termed the city-wide economic impact of the Eagles’ Super Bowl victory “huge,” although it is very difficult to calculate exactly.

“We’re the City of Winners now, all because of what the Eagles did,” Kenney said. “It’s just been a great ride everyone has been on since the Super Bowl win. The city has been electric since then and it’s going to continue. This is a special exhibit and I think it’s something we would love to keep going for a second consecutive year. Everyone is excited for the 2018 season to start.”

As the hundreds of travelers and airport employees and, well, fans, peeled away from the unveiling later in the afternoon on Tuesday, the permanence of the display remained. The great work of Philadelphia International Airport curator Leah Douglas and her art program shouted E-A-G-L-E-S, EAGLES to those passing by on their way to their gate or to baggage claim or to wherever travelers went.

And it’s only just starting.

“This is so cool,” said George Tancredi of Phoenixville, Pennsylvania. “You can’t miss it when you’re walking through. It really is exciting to look up and see pictures of last season when we won it all. I know I won’t ever forget it. It was the greatest moment of our lifetimes.”

And it’s all there for the traveling world to see, at Terminal A-East, where the celebration of the Eagles’ history-making season continues. 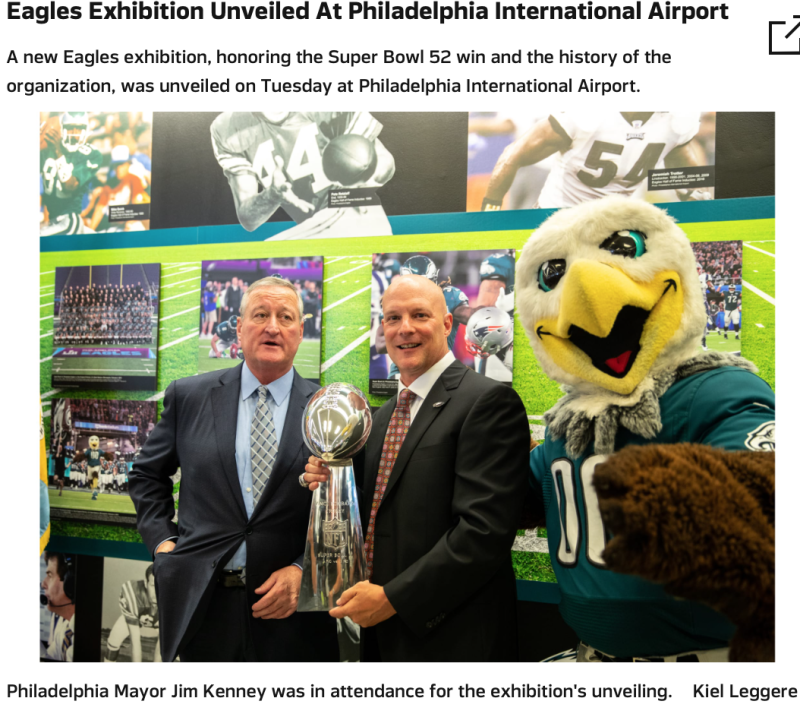 PHILADELPHIA PA (June 30, 2018)(CNBNewsnet)--A new Eagles exhibition, honoring the Super Bowl 52 win and the history of the organization, was unveiled on Tuesday at Philadelphia International Airport.