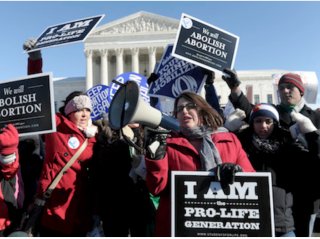 In a 5-4 decision, the U.S. Supreme Court ruled that a California law requiring crisis pregnancy centers to inform women about the availability of abortion and contraception was unconstitutional. The ruling was narrowly drawn and did not decide related issues.

Writing for the majority, Justice Clarence Thomas found the law to be an unconstitutional abridgment of the free speech rights of the crisis pregnancy centers. The law was not content neutral. Indeed, it was content based, meaning that it specifically targeted the speech of these abortion-alternative centers.

The majority noted that under the law, “licensed clinics must provide a government-drafted script about the availability of state-sponsored services….One of those services is abortion—the very practice that petitioners are devoted to opposing.” Thus, the ruling said, “the licensed notice plainly ‘alters the content’ of the petitioners’ speech.”

Importantly, the majority did not buy the spurious argument made by the Ninth Circuit of Appeals. That court ruled that the California law regulated “professional speech,” and not the kind of communicative speech that warrants strict scrutiny under the First Amendment. The Supremes weren’t buying it. “But this Court has not recognized ‘professional speech’ as a separate category of speech.”

In a clear rebuke to the Ninth Circuit’s creative law-making, the majority said that “Speech is not unprotected merely because it is uttered by ‘professionals.’ This Court has ‘been reluctant to mark off new categories of speech for diminished constitutional protection.'”

The majority also ruled that while there was no “persuasive reason for treating professional speech as a unique category that is exempt from ordinary First Amendment principles,” it did not rule out the possibility that there may be some future reason to consider it. But the bar has been set high, thus making attempts to clear it exceedingly difficult.

The pro-abortion industry has been dealt an important setback. Those who believe in protecting the lives of the most innocent among us have won a significant victory. And those who are principled defenders of free speech also have reason to celebrate.

In a 5-4 decision, the U.S. Supreme Court ruled that a California law requiring crisis pregnancy centers to inform women about the availability of abortion and contraception was unconstitutional. The ruling was narrowly drawn and did not decide related issues.