Veterinary experts work to stay ahead of equine doping 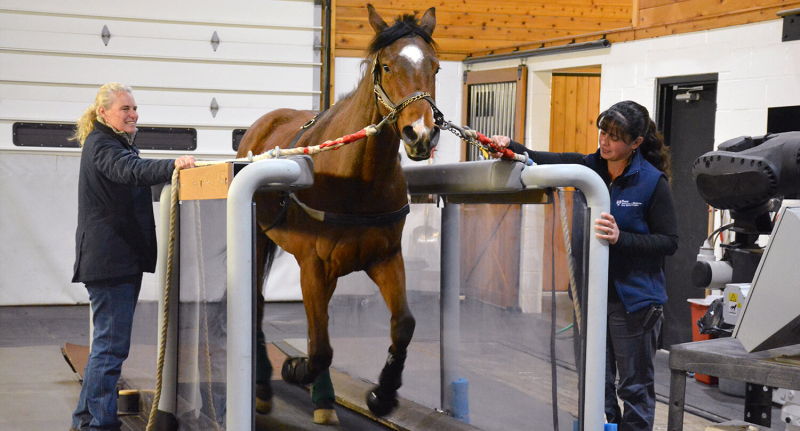 PHILADELPHIA PA (CNBNewsnet)--Elite athletes train for years to reach the top of their game. Yet some succumb to temptation, using performance-enhancing drugs to gain a slight edge over their competitors.

The same is true in equine sports. Though the vast majority of competitors come by their success honestly, some horses have been found with all manner of performance-enhancing drugs in their systems, used by unscrupulous trainers or veterinarians to give the animals an unfair advantage over the competition in races and sporting events. By masking the signs of overexertion or injury, such illicit drugs may set up a horse—and its rider—for harm, in addition to compromising the integrity of the sport.

At Penn’s School of Veterinary Medicine, researchers and veterinarians work to maintain the welfare of horses involved in sports like racing, jumping, and eventing, while also helping ensure that participants in those events start on an even playing field.

If horses are treated with something that is covering up an injury or building muscle or bone in an unnatural way, it can predispose them to an injury,” says Mary Robinson, director of Penn Vet’s Equine Pharmacology Research Laboratory (EPRL). “There are always risks; these are high-speed sports. But we want to do everything we can to make sure there is no unneeded risk to the horse or to the jockey.”

Robinson directs the research lab, located on Penn Vet’s New Bolton Center campus in Kennett Square, as well as the Pennsylvania Equine Toxicology and Research Laboratory (PETRL), which is located in West Chester and owned by the Pennsylvania Department of Agriculture.

The two labs work in tandem: PETRL is where the forensics work occurs, testing 35,000 blood and urine samples each year from horses competing at Pennsylvania’s six race tracks. It is also where analytical chemists from Penn use cutting-edge science to develop new tests to ascertain whether a particular drug is present in a horse’s system. At New Bolton Center’s EPRL, researchers study the pharmacology of drugs to understand how the horse’s body processes them and how they may affect performance outcomes.

Penn has been involved in developing new tests for equine doping since 1979, when Lawrence Soma, Robinson’s predecessor, signed a contract with the racing commission to do so. Now Penn is directly connected to the work, with 28 Penn employees conducting research and evaluating samples.

As in every field of science, the drug tests used have evolved steadily in sophistication. Today, the gold standard is liquid chromatography coupled to mass spectrometry, or LC-MS, which physically separates different components of a sample and then analyzes them based on their particular masses.

“This process gives us a fingerprint of a substance that allows us to identify the specific peptides we’re looking for,” says Fuyu Guan, research associate professor of equine forensic chemistry.

The labs also use different forms of mass spectrometers to detect substances. The equipment is highly refined and expensive. A single LC-MS instrument costs roughly $500,000, and other pieces cost roughly half that. The lab has 14 of these systems, funding for which has been provided by the Pennsylvania State Horse Racing Commission, Pennsylvania Harness Horsemen’s Association, and Meadows Standardbred Owners Association, among other sources.

One of the most significant advances the lab has achieved is erythropoietin (EPO) testing. Some might be familiar with EPO from news coverage of Lance Armstrong, but human recombinant EPO, which boosts the blood’s ability to carry oxygen, has also been used in horse racing. It’s challenging to detect, Guan notes, because, like humans, horses have a natural source of EPO, and human recombinant EPO is effective even at very low concentrations. In 2006, Penn Vet was the first lab to develop a test to detect recombinant EPO in horses, a test that is now used around the world.

“That was a really groundbreaking project,” Robinson says, and one that won recognition and awards from numerous associations and attention from the World Anti-Doping Agency.

Veterinary experts work to stay ahead of equine doping

PHILADELPHIA PA (CNBNewsnet)--Elite athletes train for years to reach the top of their game. Yet some succumb to temptation, using performance-enhancing drugs to gain a slight edge over their competitors.