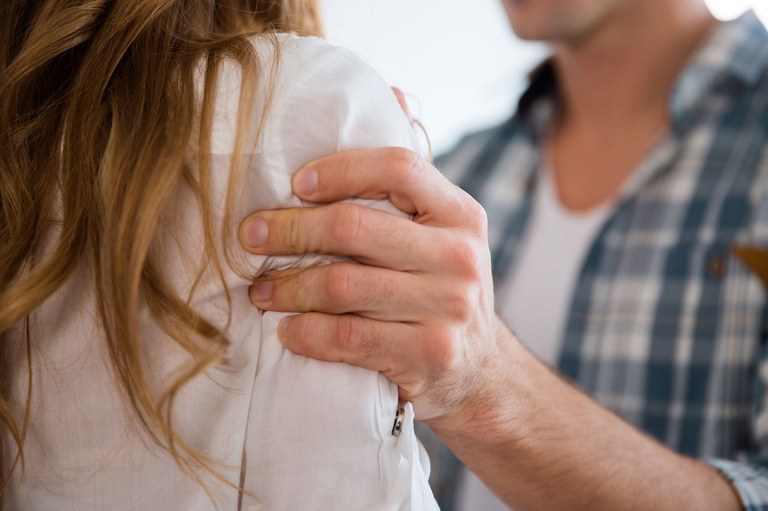 Domestic violence-related calls account for the most local police responses—as many as 50 percent.1 They also can present significant danger, resulting in the most call-related fatalities in 2016.2

Approximately one-third of female homicides in the United States accompany domestic violence, and that number is increasing.3 Another—less well-known—issue pertains to suicide risk and suicidal behavior related to abuse between intimate partners.

Intimate partner violence may constitute physical, sexual, or psychological harm upon a current or former partner or spouse. In these situations, offenders try to control their victims through fear, intimidation, threats, or force. Perpetrators may humiliate their targets, control what they do, withhold information, isolate them from friends and family, and deny access to money or other basic resources.4

The 2011 National Intimate Partner and Sexual Violence Survey found that over 10 million women and men in the United States experience physical abuse by a current or former intimate partner each year.5 Although women comprise most victims, children, men, or elders also may become targets.

Persons who suffer such interpersonal violence usually report a range of negative mental and physical health outcomes.6 Sometimes, police officers seek this information from individuals caught between reporting their abuser and fearing how the “system” will treat them.7

Abuse victims of both sexes and various ages, to include elderly persons, have resorted to suicide. The National Violent Death Reporting System (NVDRS) identified 10 such deaths among individuals 65 years of age or older and affected by domestic violence in the previous month.8 Data showed that intimate partner abuse played a role in 2,031 male and 439 female suicides across all age groups.9

Female victims with a chronic illness or disability who experience intimate partner violence have an increased risk of threatening or attempting suicide.10 Women who undergo such abuse—particularly sexual—may exhibit suicidal ideation.11Battered females seeking care in emergency departments likely have histories of this behavior.12 Medical personnel in those facilities should ask domestic violence patients about suicidal thoughts.13

As a group, African-American women show a comparatively low risk of suicide. However, intimate partner violence more than doubles the risk of attempt when experienced by low-income African-American females.14 This appears related to hopelessness, spiritual malaise, weakened self-efficacy and coping, and a perceived lack of support by family members and friends.15

Limited studies of Asian and Asian-American elders uncovered a link between this abuse and suicidal behavior.16 Koreans over 65 years old exposed to family violence exhibited a higher risk of suicide than those never abused.17 Strong suicidal ideation existed among victimized Chinese persons age 60 and older, as well as elderly abused Chinese women in the Chicago area.18

Although rare, murder-suicides also may result from intimate partner abuse. Usually, men victimize a spouse or partner in their care. Perpetrators then take their own life immediately or later. A history of domestic discord represents a major predisposing risk factor. NVDRS data cited 173 incidents (1.8 percent) of murder-suicide in the 20 to 64 age group and 27 (1.4 percent) among those age 65 and older.19

Elderly victims usually come from couples in their 80s.20 These situations may involve a long-term abusive relationship or one that became so when the care needs of one partner burdened the other. Typically, murder-suicide perpetrators include depressed adults or elderly males who have access to a firearm and serve as the main caregiver for a dependent spouse with new or worsening health problems.21

Exposure to repeated physical, psychological, or other abuse may cause victims to experience depression, psychological distress, and hopelessness. In turn, such individuals sometimes become apathetic about themselves and indifferent toward living, perhaps to the point of considering or inflicting harm upon themselves. This represents the basic premise of the Interpersonal Psychological Theory of Suicide, which proposes two prerequisites for a potentially fatal attempt: 1) a strong desire to die and 2) the capability for lethal self-harm.22

People may consider suicide when they feel that they do not belong and subsequently lose their sense of meaning. In these cases, individuals consider death more valuable than life. Such a failed sense of belongingness flows from persons’ unmet need for social relationships and a perception that people they care about do not feel the same way.

Victims’ feelings of disconnectedness increase as they become isolated from family and friends. A weakened personal network, poor social functioning, decreased self-sufficiency, and increased dependence all accompany intimate partner violence. Suffering humiliation, ridicule, or neglect can deplete self-worth and further drive social isolation. Such victimization runs counter to the need to belong and feel valued. When this goes unmet, a passive desire for death may arise.

Further, family conflict and functional impairments frequently accompany domestic violence. Either or both may produce a sense of imposing a burden upon others and a perceived lack of purpose. Individuals in adulthood and the golden years who expect social and financial autonomy may find such dependence on others intolerable.

Moderate suicidal ideation may arise as individuals continue to experience both psychological pain and hopelessness.23 The progression to stronger suicidal ideation results from further loss of connectedness with other people, social roles, interests, and sense of meaning in life, as well as a continued feeling of burdensomeness.24

Suicide risk among those reporting domestic violence also may be linked to when this abuse finally comes to light. Few victims report their initial domestic victimization, with most not doing so until they have endured multiple assaults.25Therefore, any report probably indicates a long history of violence. Also, this suggests that law enforcement officers may be the first responders to encounter victims with a high suicide risk.

Officers sometimes may hear suicide threats from the abuser, who may use them to coerce, control, or frighten the victim, particularly if the relationship likely will end. Such behavior frequently occurs before court appearances related to the abuse.26

Police responses to suicidal behavior or interpersonal violence may start with a 911 call. Officers receive training and experience to deal with either problem separately. However, one may mask or take precedence over the other when they occur simultaneously in the same home. This may create an especially dangerous situation.

The chaos that often accompanies these types of calls makes it difficult for responding officers to uncover suicide risk. They often contend with anger and anxiety, separate the parties, and gather information to determine possible charges. Primarily, officers strive to protect individuals from further harm or death. Their protocol usually does not include suicide risk screenings.

Further, abuse victims may not mention suicidal ideation because doing so may interfere with admittance to a shelter. Some may fear the possibility of a psychiatric evaluation. Elderly abuse targets are even less likely to mention thoughts of suicide. Nonetheless, victimized women seeking help while manifesting nonfatal suicidal behavior will talk about it if asked.27

Officers may pay insufficient attention to possible triggers or risk factors for suicide unless the subject or others on the scene cite them. Of course, police often have familiarity with households associated with domestic violence complaints. However, without preexisting awareness, physical or psychological abuse likely will not come up until someone has attempted or completed a suicide attempt. Acutely suicidal persons may have so much focus on ending their life that they discount what led to this mind-set.

In lieu of self-reporting or disclosure by others, the identification of possible suicide risk may not happen with a domestic call. Law enforcement and emergency, victim, and protective services agencies all usually focus on victimization. Conversely, when faced with someone at high risk of suicide, crisis center or psychiatric hospital intake personnel give primary attention to emergency mental health issues.

If no one helps an individual at risk of suicide because of interpersonal violence, the danger unlikely will abate. A history of abuse confers both a permanent risk for suicide, as well as a possible tendency for lethal self-harm among victims, even after the abuse ends.

Police treat intimate partner violence as a high priority because the situation may become life threatening. A suicidal victim remains in danger of lethal self-harm even after removal from the abusive household.

Officers should conduct at least tentative suicide-risk screenings for everyone who has experienced or perpetrated ongoing domestic violence or abuse. They can use a simple tool for this purpose.

“Police treat intimate partner violence as a high priority because the situation may become life threatening.”

Positive responses to any of the first three questions indicates the need for a more thorough risk assessment. An affirmative answer to the fourth question shows permanent, but not necessarily current, suicide risk. Anyone answering “yes” to the fifth question or with clear intent to attempt self-harm, a doable plan, previous attempts, or access to lethal means indicates a psychiatric emergency. Such persons need evaluation and necessary treatment at a hospital emergency department or crisis center. Officers can provide persons at lower risk with a local crisis hotline number or the National Suicide Prevention Lifeline (800-273-8255).

Law enforcement officers also should screen for possible intimate partner violence, even for individuals not in imminent danger. For example, a spouse or partner has initiated an emergency response because of thoughts of suicide or fears of self-harm. Once police confirm the presence of possible suicide risk, they can focus on a short screening for abuse.

Police can use a valuable instrument for this purpose. An 11-item questionnaire helps identify victims of domestic violence who have the highest risk of being seriously injured or killed by their partner.

Evaluating the Severity of Domestic Violence

When the responses indicate a high risk of homicide, police can contact a local domestic abuse hotline. They can ask the counselor’s advice and—if the individual at risk is willing—put the person on the phone with the counselor. Officers can take individuals with low, moderate, or mitigated suicidality who need protection to a victim services facility or abuse shelter. Police should report any information on suicide risk to appropriate staff members.

Officers play an important role in preventing suicide attempts and deaths in their communities. Too often, they serve as the only source of intervention for individuals who have suicidal thoughts, develop an intent to die by their own hand, and try to take their life.

Important resources, like hotlines, crisis centers, and mobile crisis teams, are not universally available. Even where they exist, the community’s emergency response usually begins with police officers. Law enforcement officers have a ready opportunity to extend their suicide prevention efforts to victims of intimate partner violence who may be suicidal or at high risk as a consequence of abuse.

Police departments often play a strong advocacy and leadership role in getting their communities and the criminal justice system to address domestic violence. They can make sure that suicide prevention comprises part of these efforts and that the potential risk of abuse victims is recognized, that such persons are assessed, and that those found to be suicidal get appropriate help.

Mr. Salvatore can be reached at tsalvatore@mces.org.

Domestic violence-related calls account for the most local police responses—as many as 50 percent.1 They also can present significant danger, resulting in the most call-related fatalities in 2016.2