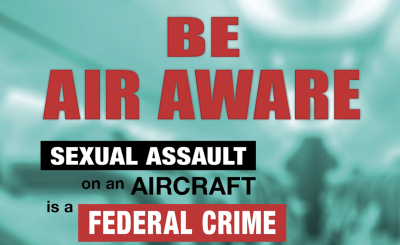 April is Sexual Assault Awareness Month, and the FBI is taking that opportunity to alert the public about a serious federal crime that is on the rise: sexual assault aboard aircraft.

Compared to the tens of millions of U.S. citizens who fly each year, the number of in-flight sexual assault victims is relatively small, “but even one victim is unacceptable,” said FBI Special Agent David Gates, who is based at Los Angeles International Airport (LAX) and regularly investigates these cases. “We are seeing more reports of in-flight sexual assault than ever before,” he said.

Sexual assault aboard aircraft—which usually takes the form of unwanted touching—is a felony that can land offenders in prison. Typically, men are the perpetrators, and women and unaccompanied minors are the victims. “But at LAX,” Gates said, “we have seen every combination of victim and perpetrator.”

In fiscal year 2014, 38 cases of in-flight sexual assault were reported to the FBI. In the last fiscal year, that number increased to 63 reported cases. “It’s safe to say that many incidents occur that are not reported,” said Gates, one of the FBI’s many airport liaison agents assigned to the nearly 450 U.S. aviation facilities that have passenger screening operations regulated by the Transportation Security Administration (TSA). In larger airports such as LAX, multi-agency task forces are on location to investigate a variety of criminal and national security matters, from sexual assaults to terrorism and espionage.

Crimes aboard aircraft fall within the FBI’s jurisdiction, and in the case of in-flight sexual assaults, agents describe elements of these crimes as being strikingly similar. The attacks generally occur on long-haul flights when the cabin is dark. The victims are usually in middle or window seats, sleeping, and covered with a blanket or jacket. They report waking up to their seatmate’s hands inside their clothing or underwear.

One victim, a mother of two who was attacked in 2016 on a flight from the West Coast to Africa via Europe, recounted her ordeal. “I fly overseas often,” she said. “The flights usually leave around 6 p.m. I have dinner, watch a movie, and go to sleep. I was dozing off toward the end of the movie, and all of a sudden I felt a hand in my crotch.”

The woman instinctively said, “No!” and pushed the man’s hand away, but he came at her two more times before she was able to remove her seatbelt and get away, even as her attacker used the full weight of his body trying to detain her. As the assault was happening, she recalled, “it didn’t make sense to me. It was all so disorienting and confusing.”

She ran toward the bathroom. Seeing her condition, passengers thought she was experiencing a medical emergency. Barely able to breathe, the woman explained what had happened and that she needed a flight attendant. After the crew responded, while she was waiting to be reseated away from her attacker, she was told by members of the crew that sexual assaults in the air were fairly common. One sympathetic flight attendant said that she, too, had been groped in the past.

“I was horrified,” the veteran flyer remembered thinking. “How can this be and I have never heard about it?”

“Unfortunately, people don’t think things like this happen on airplanes,” said Caryn Highley, a special agent in the FBI’s Seattle Division who investigates crimes aboard aircraft. “There is a perception on an airplane that you’re in a bubble of safety,” Highley said. But particularly on overnight flights, where people may consume alcohol or take sleeping pills, and a dark cabin and close-quarter seating can give the perception of privacy and intimacy, offenders are tempted by opportunity.

That is one of the reasons why the FBI is trying to raise awareness about this issue—so people can protect themselves and report incidents immediately if they do occur. “There are all sorts of people in the air, just like on the ground,” Gates said. “Flyers need to be aware of their surroundings and take a few simple precautions to stay safe.”

“There are all sorts of people in the air, just like on the ground. Flyers need to be aware of their surroundings and take a few simple precautions to stay safe.”

If alerted in advance, FBI agents can be on hand when the plane lands to conduct interviews and take subjects into custody. FBI victim specialists can respond as well, because victims of federal crimes are entitled by law to a variety of services.

“It doesn’t matter when you report an in-flight sexual assault—we take it seriously, and we will pursue it,” Gates said. “But after the fact, these cases are much more difficult to prove.”

Investigators point out that offenders take advantage of the fact that some victims might not report an incident because they are embarrassed, don’t want to cause a scene, or try to convince themselves the assault was accidental.

“These are not accidents,” Gates said. “We see the same pattern of behavior over and over again.”

The victim of the 2016 attack—whose case remains open—has used social media to raise awareness about in-flight sexual assaults and has heard the stories of many victims. She agreed that assaults should be reported immediately.

“A lot of women don’t come forward because they are embarrassed,” she said. “It is embarrassing in the moment. It’s awkward when the flight crew starts asking you all these questions and passengers are staring at you. The burden has been placed on you instead of the person who just inflicted this on you,” she explained. “Recognize and understand that. People should not be able to get away with these crimes.”

April is Sexual Assault Awareness Month, and the FBI is taking that opportunity to alert the public about a serious federal crime that is on the rise: sexual assault aboard aircraft.