ARCHBISHOP CHAPUT’S WEEKLY COLUMN: THE SHAPE OF THINGS TO COME 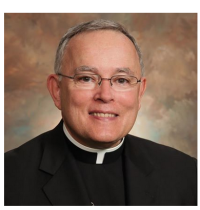 PHILADELPHIA PA (CNBNewsnet)--I’ve been a lifelong fan of science fiction stories.  Two of my favorites are classic novels by H.G. Wells (d. 1946), The War of the Worlds and The Time Machine.  Both were twice produced as movies.  Both make great reading even today.  Not everything he wrote had such lasting success, though.  Another Wells-inspired movie, Things to Come starring Raymond Massey in 1936, is far more obscure today.  Yet I’ve always found it just as intriguing as his other work, for reasons that have nothing to do with Martians or underground monsters.

The film Things to Come is based on Wells’ 1933 novel – he called it a “future history” – entitled The Shape of Things to Come.  The film version is mildly interesting.  The original novel is massive, turgid, rambling, and in the end, mind-numbing.  Both works imagine a future world-war that drags on catastrophically for decades, decimates the population, unleashes a terrifying plague, and results in the collapse of civilization and the rise of petty warlords.  In the nick of time, amid the chaos, a community of advanced scientists emerges from a secret enclave to impose a benevolent dictatorship and lead humanity to an era of recovery, progress, unity, peace, and plenty, guided by science and technology.
The most interesting thing about the two works is a plot element missing from the film but quite central to the novel.  To secure their utopia, the scientists in The Shape of Things to Come find it necessary to exterminate all religious leaders and stamp out organized religion, with the Catholic Church their last and most tenacious opponent.  Only then in the novel, thanks to this regrettable mass murder, can mankind reach its full maturity and march into the sunlight of knowledge and freedom.
It’s a familiar kind of “ends justify the means” reasoning – in this case, on steroids.
Today, 85 years after the Wells novel first appeared, the world is both very different from, and uncomfortably similar to, the content of his imagination.  In many places around the globe, religious faith is not just alive but growing rapidly.  The great ideological dictator states are dead.  Science and technology have brought about great improvements in the material quality of life and the reduction of disease and poverty.
But in the so-called developed nations, science and technology have also, too often, fostered an approach to life based on utility and efficiency, and a disdain for religious faith and believers.  The calculations of a culture ruled by the computer leave little room for the heart – which is why the philosopher Augusto Del Noce saw technological civilization as dogged by a chronic temptation to totalitarianism.  The math of microchips has no tolerance for error or imperfection, and that intolerance can easily transfer to a culture and spread like a virus.
That’s bad news for human beings, who are frequently neither useful nor efficient nor perfect, but rather weak, suffering, flawed and dependent.  For Christians, this “weakness” subtracts nothing from their humanity.  Such persons are brothers, not failures, and every needy person is a child of God worthy of love and support.  That includes infants struggling to survive a life-threatening illness like Alfie Evans.  As we see every day now in the news from Britain about baby Alfie Evans and the efforts by his parents to get him medical help outside the country, “civilized” courts of law can be utterly callous, stubborn, driven by utility, resistant to humanitarian appeals, and brutish in interfering with a child’s right to life and his parents’ right to fight for that life.
And before we applaud ourselves for how much better things are here in the United States, we may want to read David French’s April 23 coverage of the growing anti-religious nature of recent California proposed legislation.  See it here: https://www.nationalreview.com/corner/california-bill-threatens-christian-books-and-booksellers/.
As French argues, elements of the California bill amount to a “dramatic infringement on First Amendment rights, rendered even more pernicious by [the bill’s] functional declaration of certain kinds of religious speech and argument as the equivalent of consumer fraud.”
Whether the California bill is as drastic in its implications as some critics claim is open to debate.  But no one disputes that it’s just one more example of efforts to interfere with Christian belief, teaching and practice now being pursued around the country.  There are many others.
The point of my column this week is simply this.  The real “shape of things to come” is never completely in human hands.  The future will be shaped by many different facts and forces, many of which we do not and cannot control, not least the will of God.  But neither are we helpless.  Quite the opposite:  History is filled with the reality of one person or groups of persons fighting for what they believe, and thereby changing and channeling the course of events.
Our lives make a difference.  We’re here for a purpose.  That purpose includes defending the weak and the suffering, and also defending the freedom of the Church to preach, teach and speak the Gospel of Jesus Christ.  This is a privilege, not a burden, and we need to treasure it for the sake of our own humanity and the humanity of those we love.
source Philadelphia Archbishop Charles Chaput

ARCHBISHOP CHAPUT’S WEEKLY COLUMN: THE SHAPE OF THINGS TO COME

PHILADELPHIA PA (CNBNewsnet)--I’ve been a lifelong fan of science fiction stories.  Two of my favorites are classic novels by H.G. Wells (d. 1946), The War of the Worlds and The Time Machine.  Both were twice produced as movies.  Both make great reading even today.  Not everything he wrote had such lasting success, though.  Another Wells-inspired movie, Things to Come starring Raymond Massey in 1936, is far more obscure today.  Yet I’ve always found it just as intriguing as his other work, for reasons that have nothing to do with Martians or underground monsters.