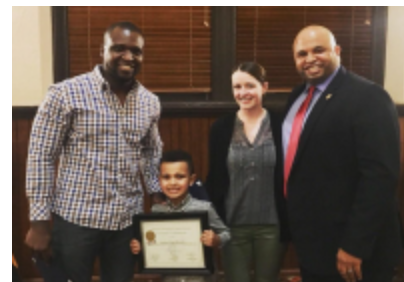 The Whitman Elementary School Kindergartner wanted every child to be able to have a gift waiting for them on Christmas and his goal was achieved when he was able to buy over 130 gifts with the money brought in by the community totaling approximately $1,005 in total.

In its three hours of operation, the hot cocoa stand saw about 60 visitors and more than $600 in donations. The support of the community didn’t stop there, however. As word spread about the stand and its goal, people began to send in more and more donations to support Jordan and his charitable cause.

Freeholder Jim Jefferson, liaison to the Department of Health and Human Services said, “Jordan not only accomplished his goal by donating over one hundred toys to children in need, he also managed to bring his whole community together for a good cause. It’s amazing what our children are capable of doing for others, especially during the holidays.”

With the donated money, Jordan and his mother, Trinna Wooster, were able to shop online and in stores like Target, Walmart, Five Below, and Kohls around black Friday in order to purchase as many gifts as possible. Jordan was able to hand-pick gifts to later give to the U.S. Marine Corps Reserve Toys for Tots in Gloucester County, The Children’s Hospital of Philadelphia, and a local family in need.

Jordan was presented with a certificate and new train set from representatives from Toys for Tots during a special visit to thank him for all that he’d done to help his community.