Shockwaves felt in NJ from Earthquake in Delaware

An earthquake centered 6 miles east-northeast of Dover, Delaware, hit the Mid-Atlantic region late Thursday afternoon, shaking buildings and people, but causing no apparent damage. It was the biggest tremor to strike the East Coast in six years. Read more →

Gloucester City News blog files CINNAMINSON, NJ (November 30, 2017)--Burlington County Prosecutor Scott Coffina announced today that criminal charges have been filed against the driver of a stolen vehicle that crashed into the back of a tractor-trailer earlier this month on Route 130 in Cinnaminson, killing a teenage passenger. The name... Read more → 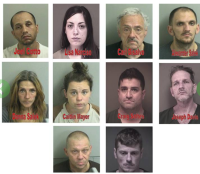 TOMS RIVER, NJ --On November 22,2017 the Toms River Police Department’s Special Enforcement Team, along with the Townships Quality of Life Task Force, executed two search warrants at the Americana Motel; 925 Route 166. One of the search warrants was for the manager’s office and pertained to an ongoing narcotics investigation.... Read more →

A quarter of NJ Transit’s rail managers left the agency in the two years before the deadly crash at Hoboken Terminal, Curtis Tate reports for The Record. The railroad reported the turnover to the Federal Railroad Administration in documents The Record obtained in a Freedom of Information Act request. Tate writes:... Read more →

Catholic League president Bill Donohue comments on recent public hearings held by the New York City panel authorized to assess the propriety of controversial monuments on public grounds: On November 27, the New York City Mayoral Commission on Art, Monuments, and Markers completed its hearings; they were held in all five... Read more → 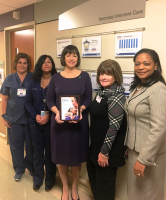 HEALTH ALERT: More Than a Dozen People in 3 Counties May Have Been Exposed to Rabid Kitten

NJDOH reminds residents to protect themselves and their pets More than a dozen people in three New Jersey counties may have been exposed to a kitten who tested positive for rabies at the New Jersey Department of Health lab on Nov. 28. Any individuals or animals that may have been in... Read more →

LETTERS TO THE EDITOR: Majority of NJ Residents Think Menendez Should Resign

ClearysNoteBook Blog files While disgraced Senator Bob Menendez’s bribery trial ended in a hung jury, New Jersey voters have made up their mind that it’s time for Menendez to go. A new Rutgers-Eagleton poll released today finds that just 26% of New Jerseyans think Menendez should be reelected if he runs... Read more →

BATON ROUGE, LA (11/29/2017)-- Molly Foster of Riverton, New Jersey, recently was awarded a Study Abroad Grant worth $1,000 from The Honor Society of Phi Kappa Phi--the nation's oldest and most selective collegiate honor society for all academic disciplines. Foster is one of 25 students nationwide to receive the award. Currently... Read more →

Newswise — Slowly but steadily, an enormous mass of warm rock is rising beneath part of New England, although a major volcanic eruption isn’t likely for millions of years, a Rutgers University-led study suggests. The research is unprecedented in its scope and challenges textbook concepts of geology. “The upwelling we detected... Read more →

a homosexual nativity scene in Los Angeles Catholic League president Bill Donohue comments on the rash of offensive Christmas fare: It’s not even December, and the Christmas haters are already out in force. In addition to those who want to censor Christmas, such as the D.C. Metro Area Transit Agency, there... Read more →

Tuesday, January 15, 2013 Posted 01/08/2013 | AMAC Authors, In The News, Opinion By Jedediah Bila Yesterday on Fox News, I heard an excellent monologue by Neil Cavuto, thoughts he shared about the Republican Party after seeing Spielberg’s “Lincoln.” He said what needed to be said, that the Republican Party has... Read more → 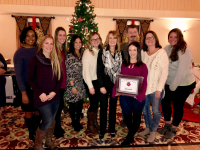 November 29, 2017 Harrisburg, PA – Today, Governor Tom Wolf touted the commonwealth’s commitment to the advancement of solar energy and clean energy job creation by emphasizing the importance of two recent announcements and two ongoing initiatives that will help ensure Pennsylvania remains at the forefront in competing for good paying... Read more →

Posted by CNBNewsnet on Thursday, November 30, 2017 at 11:00 AM in Announcements/Classifieds, Consumer News, PHILLY & PA. NEWS, YOUR MONEY | Permalink | Comments (0)

A Day With Glass Eels

by Deanna Gambino, Hourly Fisheries Technician Bureau of Marine Fisheries November 29, 2017 NOTE: This article is one in the series, A Day In the Life Of a Marine Fisheries Hourly. Figure 1 Finally, it was time for my first day in the field. Before heading out, we checked that the... Read more →

Drug Dealer Charged with Homicide in Death of Marlton Customer

MARLTON, NJ (November 29,2017)--Burlington County Prosecutor Scott Coffina and Evesham Township Police Chief Christopher Chew announced that a Lawnside drug dealer has been charged with homicide for causing the death of a Marlton customer to whom he sold heroin in September. Jimmy Flakes Jr., 40, of the 100 block of Ashland... Read more →

Letter to the Ed: Reject the Robin-Hood Reverse Schemes

Friend, This week in Washington the GOP is working to pass the Trump tax scam -- which is a huge tax hike for New Jersey families that they are trying to pass off as some sort of deal. Don’t be fooled by their spin. Working families will pay thousands of dollars... Read more →

Posted by CNBNewsnet on Thursday, November 30, 2017 at 09:02 AM in Camden County , General/Political News, Letters/SOUND OFF, South Jersey | Permalink | Comments (2)

November 29, 2017 The week of December 4-9 may be the busiest week of the year for hunters in New Jersey: the concurrent Six-day Firearm Deer and Black Bear hunting seasons (Segment B) open Monday 1/2 hour before sunrise; the Permit Bow season continues in zones governed by Deer Regulation Sets... Read more →

Newswise — ANN ARBOR, MI – Most older Americans take multiple medicines every day. But a new poll suggests they don’t get – or seek – enough help to make sure those medicines actually mix safely. That lack of communication could be putting older adults at risk of health problems from... Read more →

HARRISBURG PA (November 29, 2017)— Two men who coerced six victims into prostitution with the false promise of easy money and then used drugs, violence and threats to control them have been arrested for human trafficking. Attorney General Josh Shapiro’s office worked closely with the Pennsylvania State Police and other law... Read more →

Coast Guard conducts out of water inspection on NYC ferry; Declared Safe for Passenger Use

NYC Ferry "Urban Journey" near the 59th Street Bridge (Queensboro Bridge) on the east side of Roosevelt Island (courtesy of https://www.vesselfinder.com) NEW YORK (November 29, 2017)---- Today the Coast Guard completed an out of water inspection on the ferry Urban Journey, hull number H201, one of 10 New York City commuter... Read more → 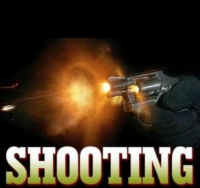 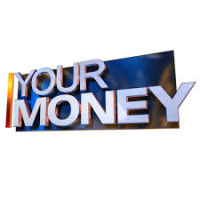 First lady Michelle Obama wears a hijab while President Obama visits Istiqlal Mosque in Jakarta in 2010 (Photo: Screenshot/CNN Turk) Judicial Watch announced Monday it obtained records from the U.S. Department of the Air Force and the Secret Service in response to a Freedom of Information Act request and two FOIA... Read more →

Gov.-elect Phil Murphy says he fully expects the Legislature to pass a millionaires tax, even though enthusiasm seems to be softening among some Democratic leaders. State Senate President Steve Sweeney has said he would reconsider his support if Congress enacts federal corporate and income tax cuts while repealing the federal deduction... Read more →

Police are searching for a group of teens who are suspects in the brutal death of a 57-year-old homeless man in the Mayfair section of Philadelphia, reports said Tuesday. Kevin Cullen died Monday ... Read more → 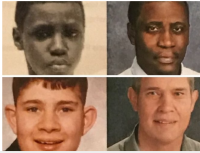 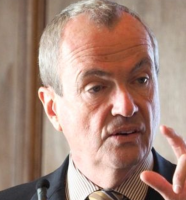 They're two of the biggest priorities Phil Murphy wants to tackle after he is sworn in as New Jersey's next governor in January: raising taxing on millionaires and legalizing recreational marijuana. But Murphy has run into some pushback from his fellow Democrats who lead the New Jersey Legislature -- the people... Read more →

PITTSBURGH (KDKA) – A new report on pension costs in Pennsylvania shows retired educators collecting hundreds of thousands of dollars. Among the top recipients is a former Penn State University administrator who pleaded guilty to charges connected to the Jerry Sandusky scandal. Traditionally pensions are calculated by taking a look at... Read more →

November 28, 2017 Harrisburg, PA – Today, Governor Tom Wolf announced three new approvals through the Industrial Sites Reuse Program (ISRP) that will clean up former industrial sites in Montgomery, Luzerne, and Allegheny counties to prepare them for occupation by businesses and residential properties. “The benefits of the ISRP are twofold,... Read more →

Slim Randles | CNBNewsnet Slim Randles “Ahhh! Coffee!” said our resident cowboy, Steve, raising his cup at the philosophy counter. “Let’s raise our cups to whichever Brazilian came up with this stuff.” Very slowly, Herb Collins stood with his cup of coffee there in the midst of culture and education at... Read more →

The state Department of Community Affairs (DCA) released its Request for Proposals (RFP) for nonprofit and for-profit developers to take advantage of $4.5 million available to create projects in the Trenton neighborhoods of downtown, Hanover Academy, Mill Hill or the Train Station that incorporate market-rate rental housing as part of an... Read more →

October 2, 2017 New Jersey's Fish and Game Council (Council) and the DEP Division of Fish and Wildlife are proposing amendments to the 2018 - 2019 Fish Code. The proposed amendments will be published in the October 2, 2017, New Jersey Register, initiating the sixty-day public comment period which will end... Read more → 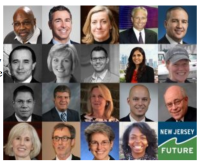 Among those named to Gov.-elect Phil Murphy's transition team are 15 experts who have a current or prior affiliation with New Jersey Future, a sign that the priorities of the incoming administration will include some of the key issues outlined in New Jersey Future's gubernatorial blueprint. Named to leadership roles on... Read more →

A Guide to New Jersey's Most Colorful Real-Life Mobsters

by Seth Ferranti Major federal busts of the Bonanno and Gambino families earlier this month and the DeCavalcante family in 2015 suggest there’s there’s still a fair amount of Mafia activity in New York and New Jersey. But it's nothing on the scale of 40 or 50 years ago, when taking... Read more →

Retired and investing with friends or family? Think hard, and then think again

Thinking of investing with friends or family? Take a huge step back — and consider the story of Ron Smith and his daughter Lynn Byrne of Doylestown, Pa. Smith and Byrne invested and lost roughly $230,000 in a physical therapist's startup small business — and got no help from regulators. Smith,... Read more →

Michael Rogers, MD New Jersey is in the grips of an opioid epidemic that is destroying lives and communities, but one local doctor is helping to change that through a more compassionate approach to addiction treatment. WEST DEPTFORD, N.J. (PRWEB)November 09, 2017--The old fashioned idea that addicts must “hit rock bottom”... Read more →

N.J. Democrat Senator: Murphy should not "pay for legal pot with people's lives"

Incoming N.J. Assembly Speaker Craig Coughlin (D-19) recently surprised some observers by throwing cold water on marijuana legalization, telling state media that " [a]s with any bill - particularly any bill that would create something new - I think the devil is really in the details." Skepticism towards legalization – or... Read more → 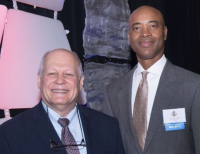