The FBI defines the most serious forms of "violent crime" as murder, manslaughter, rape, robbery and aggravated assault. But the FBI also counts property crimes of burglary, larceny-theft and motor vehicle theft in the category. Read article 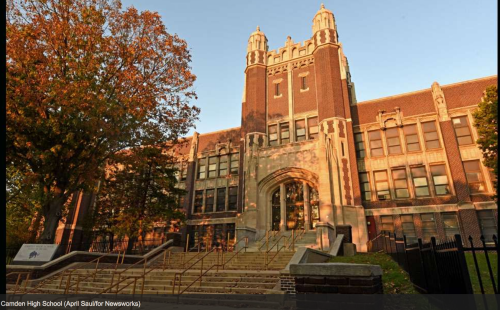 CAMDEN'S CASTLE ON THE HILL COMING DOWN—Work on the demolition of the English Tudor Camden High School main building, constructed in 1916 on Kaighn Avenue, in the Parkside section of the city is scheduled to begin a few days. Known to residents as "The Castle on the Hill" will be replaced by a $132.6 million campus being built under the direction of the New Jersey School Development Authority (SDA). The SDA is the same group that built the $87 million Gloucester City Middle School that just opened.

April Saul a Pulitzer Prize-winning photojournalist whose lifelong mission has been to help people understand each other better through her writing and photography wrote a column in July about the demolition of this historical building.

It would only happen in one of the poorest communities in New Jersey — and especially Camden, where state control has stripped residents of their right to vote for their own board of education--that the single most historic, inspiring edifice and an enduring symbol of black achievement would be considered of so little consequence. Somehow, the over a billion in tax breaks that corporations have recently received to relocate to Camden through the state's Economic Opportunity Act make the cost of saving the Castle seem like a pittance and its destruction that much more obscene.

Especially if a new school isn't even put in its place.

Why would a growing number of residents not believe the SDA's promises of a gleaming new educational complex?

Because they remember when the Lanning Square School was torn down and then-Governor Jon Corzine promised to build a new $42.4 million public school in its place in 2010--and instead, a shiny new charter named after South Jersey political boss George Norcross arose from the ashes.

Because with the proliferation of charter schools, there are a plethora of places for teens in the city to be educated. Because land in the Parkside neighborhood where the High is located is valuable and ripe for gentrification, with residents afraid of being forced out by rising property values, hence higher taxes.

And because Camden School Superintendent Paymon Rouhanifard has said publicly that he can offer no ironclad guarantee the four-year construction will actually happen.

EVER WONDER WHAT'S COMING IN THE MAIL?—Earlier this year the U.S. Postal Service unveiled a new program known as Informed Delivery, a free service that lets you see what will be in your mailbox that day or the next. Sign up and you’ll receive an email each morning with actual size black and white images of the front side of the letters and cards to be delivered.

Informed Delivery is for residential mail customers and you must sign up for it at InformedDelivery.USPS.com. It is not currently available for mail delivered to P.O. boxes.

Only 10 images will be sent via the daily email notification. If you receive more than 10 pieces of first-class mail, you’ll get 10 images and a link to see the rest. These images are available for seven days.

Notifications are sent Monday through Saturday on days that mail is processed. If for some reason a piece of mail is not handled via automation, an image cannot be sent.

The Postal Service does not open any mail. This is simply a digital scan of the address side of the envelope. And those images will only be emailed to the person to whom the letter was sent.

If all the mail in one household is delivered to one mailbox, those who share the residence and the mailbox will receive the same images for all the mail delivered to that household. If you get an image of a letter, but not the physical piece itself, Informed Delivery makes it easy to report that missing mail to the Postal Service. The image can help speed up the process of finding what’s missing.

This reporter signed up Informed Delivery and likes the service.