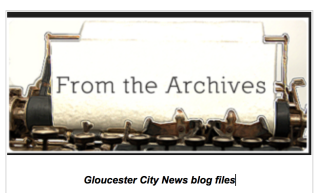 Wayne Bird Sr., absent, was approved as a volunteer firefighter. Both men were congratulated by the governing body.

Resolutions were approved for various budget transfers commonly occurring at the end of the year.

Minor adjustments were made to tax records, and refunds to the Planning and Zoning Board accounts were approved.

A professional services contract with John Milner Associates, Inc. was approved for the continuation of a Historic Culture Survey needed for future improvements to the waterfront area.

A renewal for a 2009-2010 plenary retail consumption license for Pat and Jack’s Tavern was approved.

A lien in the amount of $3700 was redeemed for property noted as Block 37, Lot 1 for expenses incurred by the City for upkeep of the property such as cutting high grass and weeds.

Council approved a state contract for purchase of a 2009 Ford pickup truck for the Gloucester City Public Works Department in the amount of $25,000.

A bond ordinance for funding for the replacement of the water treatment plant was tabled for further discussion.

On second reading and open public hearing, provision was passed for the reconstruction of various streets in the City. The sum of $75,000 was appropriated from capital improvement fund for the streets project.

In the public forum, residents reported that cars are being damaged by youths running keys along the car body, loud noises from neighbors, and thefts of Christmas decorations.

Mayor James said the city is aware of the problems and police surveillance will be stepped up.

Reblog (0) Digg This Save to del.icio.us

I see that Gloucester has hired a new firefighter, but I have also heard that when Officer Reinhardt retires soon that the city will NOT be replacing him with a new officer. Has anyone heard any info about this?

Putting a Price Tag on My Life said...

Just what we need another fire fighter. Other then the 4th of July fire how many major fires have we had. One maybe two in the six years since it happen. Come on more Police less Fire would do this city well.

The union that represents the highway workers said one of its members complained about being uncomfortable while riding around the city all day.

The grievance reads "three of us fat guys can't all fit in the front seat. It is a health issue being jammed inside the truck cab like that and is causing the middle guy to get "wedgies" in his underwear. We demand you buy a new pickup truck to correct these deporable working conditions."

According to a union rep. the goal is get a pickup truck for each one of the 21 employees in that dept. As of last count there are 11 trucks in that dept.

The grievance reads "three of us fat guys can't all fit in the front seat. It is a health issue being jammed inside the truck cab like that and is causing the middle guy to get "wedgies" in his underwear. We demand you buy a new pickup truck to correct these deporable working conditions."

Did they mention that the new fire fighter was hired from out of town and lives out of town. Isnt this against City's ordinance or what trick did they get around that one?

Did the City settle the lawsuit filed by the seven provisional firefighters that were by- passed because of the civil service mistake by the administrator?

Yes it used to be when you are hired by the fire department you had to live in town at least a year from your hire date then you could move where ever you want.. Believe me he is not the only ff/emt that did not live in town when hired.. there are quite a few that were.
The Fire administration or past city administration prolly up and changed it, The fd fathers make up their own rules as they go and say one thing one day and another the next... so much for following protocols!!! Oh wait they would just change those when they want as well also!!!
Feel sorry and extend your deepest sympathies to anybody that belongs to GCFD...
Get ready for another long year with these issues
bc they are only going to get worse especially when they push the rest of the volunteers out and need more "MAN"power and your taxes go up even more.. their budget will go from 3 mill to 5 mill....

Isn't it about time this city started to look at how to stop/control spending. If they have done anything to cut costs they have kept it a big secret. If they don't mandate the new administrator to look for waste and abuse we have no way to justify the new hire.

The state is about to make sizable funding cuts because of falling revenue. Are we going to continue the wasteful practice of maintaining a full time paid fire department?

I just don't understand why we need another PAID Firefighter. It's true he don't even live in town? I'm sure we have a Volunteer who would love to have a Paid Fire position.

What's up with hiring a Outer Towner? We need to take care of our own First.

I have nothing against the Fire Dept but also
we need more Police, our Crime is UP not Fires.
WHAT'S NEXT???
GOD BLESS ALL POLICE & FIREMEN.