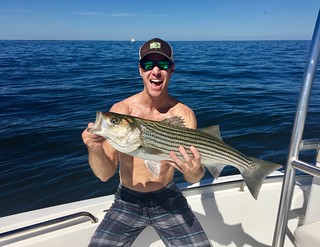 The heat and humidity hanging over Maryland continues to hold a grip on us, but it won’t be long before fall is here to stay.

At present, spot are still available on many shallow hard-bottom areas but are showing a propensity for being on the move. The mouth of the Magothy River, Chester River, Sandy Point and shallower ends of the Bay Bridge have been locations to look for spot. The channel edges at Swan, Love and Podickory points continue to be good places to live line spot but shoals, knolls and other channel edges in the region can also be worthwhile places to find suspended striped bass.

Before we get into this week’s fishing report, I wanted to remind everyone that they can submit their own fishing reports and photos to the Maryland Angler’s Log. To post a report, please email your name, hometown, photos, location information and additional content for your report. All information is optional, but encouraged. New reports are posted daily during the busy fishing seasons. You can see our most recent Angler’s Log here.

Trolling can be a good option to cover plenty of territory when looking for striped bass along channel edges. Spoons, bucktails and surge tubes behind planers or inline weights are the most popular choice but slow trolling with deep diving crankbaits is an often overlooked option. What is most important is that you get the lures down to where the fish are suspended, which often is close to the bottom along the channel edges. Salinities are elevated in the upper bay region so bluefish are present and have been chewing on live lined spot or lures being trolled.

The Chesapeake Bay Bridge piers, concrete abutments and rock piles have been good places to look for striped bass suspended near these structures. Live lining spot, chunking and jigging have all been effective ways to fish for the rockfish holding there.

At the very top of the bay at the lower Susquehanna River area there have been only sporadic power generation releases at the Conowingo Dam, causing very low water levels when the gates are closed. There are some striped bass being caught in the dam pool, the lower river and out by the Susquehanna Flats during early morning and late evening hours on topwater lures and jigs. Many are under 20 inches but a few legal fish are being caught; there is also a mix of smallmouth and largemouth bass in the same general areas.

In the middle bay region there is a lot of bait staging out in the bay and being swept along by currents at major channel edges. The bait is mostly made up of bay anchovies and small menhaden. A mix of small striped bass, bluefish and a few Spanish mackerel are feeding on them and attracting the attention of birds and fishermen. Casting to breaking fish is always fun but as is usually the case, the larger fish are usually underneath if they are nearby and can be caught by jigging. 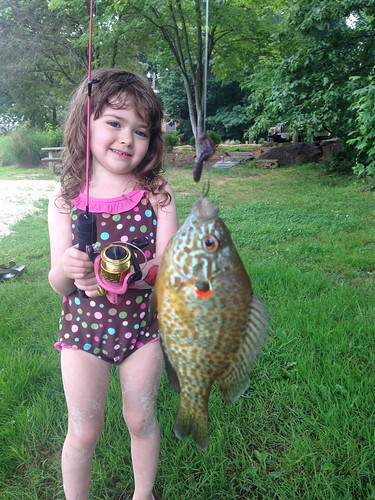 Ashley Strackbein had a good time while fishing with her dad at a local pond. Photo by Paul Strackbein

Live lining spot continues to be the most popular and productive method of fishing for striped bass this week. The spot are holding over good bottom in the shallower areas of the tidal rivers and bay. The striped bass are holding along channel edges in about 35’ of water. The outside edges of Hacketts, Thomas Point, the Hill of Poplar Island and the False Channel tend to be some of the better places to find suspended striped bass. Bluefish continue to be in the region and can be rather pesky when live lining. One bonus is that a few large red drum have been caught and released while live lining near the False Channel.

Trolling small spoons and surge tube lures behind planers and inline weights along channel edges can produce a mix of Spanish mackerel and bluefish as well as sub-legal striped bass. At times if one can get close to the bottom along some of the steeper channel edges they can be rewarded with larger striped bass.

In the lower bay region live lining for striped bass has taken an upbeat turn for the better at some of the channel edges near Point Lookout. The edges outside Cornfield Harbor and around to the north up to Point No Point have been good places to live line. Bluefish have been very prolific in the lower bay and make keeping live spot intact difficult.

Breaking fish can be encountered throughout the lower bay region and Tangier Sound. The top action is mostly comprised of bluefish, small striped bass and Spanish mackerel. At times sea trout that are holding close to the bottom under the surface action are being driven to the surface by large red drum. This type of action with red drum is occurring from the Middle Grounds up past the Target Ship.

Bottom fishing for large spot has been the best in Cornfield Harbor, the lower Patuxent River and Tangier Sound. A mix of croaker, sea trout, kingfish, white perch and blowfish tend to round out the mix. In the Tangier Sound area red drum within the slot of 18 inches to 27 inches are also being caught by those bottom fishing or by fishing for speckled trout along the marsh edges and creeks.

Before we get into the crabbing, freshwater sand ocean sections of the report, here is another bay conditions update from the team at Click Before You Cast.

Main bay temperatures increased about 2 degrees to 77 degrees Fahrenheit from the latest period of warm temperatures. However, as we approach “Rocktober,” expect cooler temperatures to return. Expect windy conditions from Wednesday through Friday. Sunny, dry and cooler temperatures will persist over the next week. These cool, windy conditions will continue to help improve oxygen conditions. Regardless, while lots of Maryland waters still have adequate oxygen from surface to bottom, start your search just above the “Do not fish below this depth.”

In the upper bay near Swan Point avoid fishing depths below 16 feet. At the Bay Bridge, fish above 25 feet while from the mouth of the Choptank River south, there is plenty of oxygenated water down well below 30 feet. Expect reduced water clarity for many of areas of the bay as a result of the higher than normal winds re-suspending sediments occurring over the next several days and the recent algal blooms in the mainstem bay and lower Potomac River. Expect normal flows for streams entering Maryland’s portion of the bay. In addition, there will be improving tidal currents from next Monday through Wednesday as a result of the upcoming full moon Oct. 6.

For the full weekly fishing conditions summary and more detailed and up-to-date fishing conditions in your area of the bay, be sure to check out Eyes on the Bay’s Click Before You Cast. Drop us a line with comments or suggestions.​ 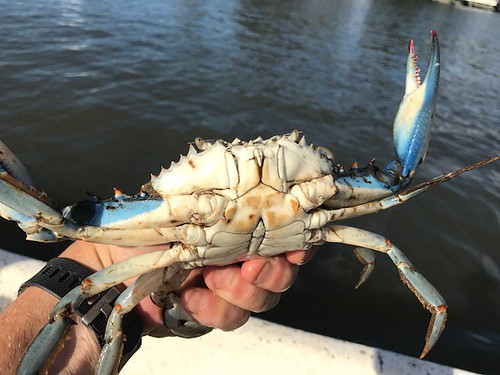 Recreational crabbing continues to be worth the effort since the larger male crabs are heavy and full of meat. Catches in the lower bay have been very good as well as the middle bay region. The upper bay tends to be fair to good, depending on location. Female crabs are abundant and chewing up baits so most are using chicken necks. Fall is a wonderful time to enjoy the best crabs of the season, large rusty bottom and heavy crabs.

The upper Potomac River is running very low and clear this week with a lot of loose grass floating, making for difficult fishing. A careful approach light lines and long casts are in order to submerged ledges and current breaks that are shaded if possible. Topwater lures and tubes tend to be the best choices for smallmouth bass.

Fishing at Deep Creek Lake has been centered on fishing deep grass edges and rocky bottom for a mix of large yellow perch, walleye and smallmouth bass. Drifting minnows, jigging or casting crankbaits. There is some largemouth bass and smallmouth bass holding near floating docks, but more and more of the docks are being pulled every week.

Trout fishing in many of the catch and release management waters in the western and central regions has been very good for fly fishermen. Most trout are feeding on various terrestrials such as grass hoppers and flying ants.

Grass is beginning to break up in lakes and ponds throughout Maryland as the hours of daylight diminish each day. Casting spinnerbaits and small crankbaits near the edges is a good tactic for largemouth bass. Topwater lures can also be a good choice in the morning and evening hours. Structure such as sunken wood in slightly deeper waters are good places to target with small crankbaits, and soft plastic jigs and craws.

Channel catfish are active in most of the tidal rivers flowing into the Chesapeake Bay and blue catfish are becoming more common in rivers other than the Potomac and Patuxent. In the tidal Potomac there are abundant numbers of blue catfish spread out from the Wilson Bridge down to the Route 301 Bridge. Northern snakeheads will also be found in most tidal rivers and creeks now as they continue to spread across Maryland. 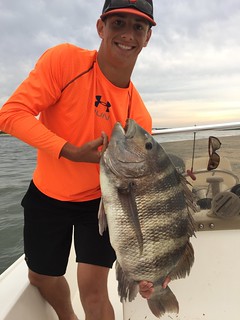 It has been a rough go in Ocean City for those hoping to do a little surf fishing as heavy surf pounds the beaches as Hurricane Maria passes off our coast. There has been good fishing at the Ocean City Inlet for sheepshead and a mix of sea trout, blowfish and triggerfish. Sand fleas, pieces of green crab and clams have been preferred baits. Robert Martin had one of those days we all dream about while he was fishing the south jetty with his dad. After a tough fight, Robert landed an 18-pound sheepshead which has been confirmed as the new Maryland state record for the Atlantic Division.

The boats that have been braving heavy ground swells have been finding a mix of wahoo, yellowfin tuna and dolphin at the Poormans and Baltimore canyons. White marlin releases are common mixed in with releases of small blue marlin.

“Rivers and the inhabitants of the watery elements are made for wise men to contemplate and for fools to pass by without consideration.” – Izaac Walton

ABOUT THE AUTHOR Keith Lockwood has been writing the Fishing Report since 2003 and has had a long career as a fisheries research biologist since 1973. Over the course of his career he has studied estuarine fishery populations, ocean species, and over a decade long study of bioaccumulation of chemicals in aquatic species in New Jersey. Upon moving to Oxford on the eastern shore of Maryland; research endeavors focused on a variety of catch and release studies as well as other fisheries related research at the Cooperative Oxford Laboratory. Education and outreach to the fishing public has always been an important component to the mission of these studies. Keith is an avid outdoorsman enjoying hunting, fishing, bird dogs, family and life on the eastern shore of Maryland.

The heat and humidity hanging over Maryland continues to hold a grip on us, but it won’t be long before fall is here to stay.