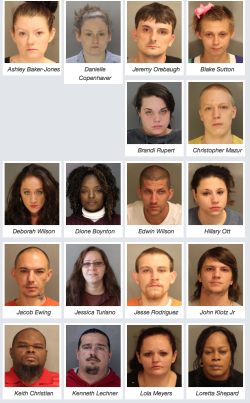 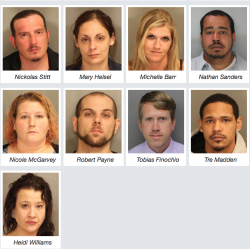 “Thanks to strong collaboration, our agents and local and state law enforcement today charged 35 drug dealers with peddled their poison in Altoona and Blair County,” Attorney General Josh Shapiro said. “This is the 5th major drug operation we’ve conducted in Blair County since I was sworn into office in January. We’re here and we’re not going away. We hear the people of Blair County – and we’re going to do whatever it takes to arrest anyone selling drugs and fueling an epidemic that is ravaging Pennsylvania.”

Since January, Attorney General Shapiro has emphasized a comprehensive, multi-pronged approach to fighting the opioids epidemic in Pennsylvania. In 8 months, Shapiro’s office has:

The drug dealers charged today were selling heroin, opioids, cocaine and other drugs. Several of the dealers charged were also selling suboxone, a prescription drug used to treat opioid addiction. The defendants will be preliminarily arraigned before Blair County Magisterial District Judge Fred Miller and prosecuted by the Blair County District Attorney Office.

These defendants were charged with possession with intent to deliver drugs and related offenses: