Angler Miles Humphries with his first catch, a white perch from the Key Bridge. Photo by Joe Humphries

This is Erik Zlokovitz filling in for Keith Lockwood on the weekly fishing report. As I write this report, there is a disturbance bringing in some rain and winds along the mid-Atlantic coast, but it is nothing compared to the historic flooding being experienced now by the folks in the Houston area, southeast Texas and western Louisiana. The weather forecast here in Maryland is fair to good for the next few days, with rain in the forecast Saturday. We may be entering into a slight cooling pattern, which means that fishing will gradually shift into early fall mode. Take your kids out fishing at least one more time before school starts! 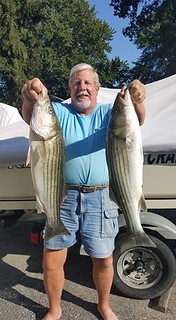 Before we get into this week’s fishing report, I wanted to remind everyone that they can submit their own fishing reports and photos to the Maryland Angler’s Log. To post a report, please email your name, hometown, photos, location information and additional content for your report. All information is optional, but encouraged. New reports are posted daily during the busy fishing seasons. You can see our most recent Angler’s Log here.

In the upper bay, there have been reports of striped bass starting to show in their upper bay fall areas. Some anglers are having success with striped bass around Poole’s Island by slow trolling with live eels. Many anglers from the extreme upper bay (north of Poole’s Island) have been running south to the Rock Hall and Chester River area to find better fishing. The white perch in the upper bay are in shallow water, at water depths ranging from 6 to 10 feet. The larger striped bass have come from shallow structure as well. The Susquehanna River has a reliable striped bass and smallmouth bass bite early and late in the day.

There is still a large chumming fleet working the area around Baltimore Light off the mouth of the Magothy River. There are a lot of throwbacks, but the persistent anglers are still finding their limits of fish over 20 inches. Small bluefish continue to mix into the action in this area. Trollers are catching some fish on red plastic hoses (surgical tubes).

The middle bay region has produced good fishing for striped bass with a combination of live-lining, trolling and casting. The False Channel at the mouth of the Choptank continues to be a hot spot for live-lining spot for striped bass. Breaking fish are being spotted from Kent Island south to the Choptank mouth on the eastern shore and Tolley Point, Thomas Point and West River mouth on the western shore. These tend to be fast moving schools of smaller striped bass and there may be bluefish and Spanish mackerel mixed in with the breaking schools of striped bass during late August and September.

Bottom fishing for a mix of white perch and spot with a few small croakers tossed in has been good in areas from Kent Island south to the Choptank and in most tidal rivers where good hard bottom can be found. Peeler crab and shrimp have been working well for white perch and croaker, bloodworms will work especially well for the spot. Spot have also been abundant around Hackett’s Bar, Dolly’s Lump and the bay bridge area off Annapolis.

We have exciting news from the lower bay region! A new state record sheepshead (for Chesapeake Division) off South Marsh Island in the Holland Straits area, near Tangier Sound. Dave Alveberg caught the 13.73-pound record breaking fish Aug. 17, in roughly 4 feet of water off Gunbarrel Point on soft crab bait. In addition to the new state record sheepshead, the lower bay region is still producing exciting fishing opportunities for cobia and red drum. The cobia continue to be found from the Middle Grounds north to the Target Ship and chumming and baiting with live eels and chunk baits has been the most popular way to fish for cobia. Red drum are caught while trolling large spoons and also when casting to breaking fish with spoons and leadhead jigs dressed with bucktail, plastic trailers and skirts.

Striped bass reports have been better than last summer in the lower bay and Potomac region. They have been found in the lower Potomac River near St. Georges Island, Piney Point area along the steep channel edge and on the channel edge at Cove Point. Live-lining spot has been the most popular way to catch them but some folks are having luck with jigging and trolling. Some anglers have been casting to the fish around Cedar Point Light.

There have been good trolling opportunities in the shipping channel for a mix of bluefish and Spanish mackerel. Trolling with small spoons (size 0 or 1, Huntington Drones, Tony’s and other small spoons of similar design) behind inline weights or planers has been the best way to get down to the fish. If the fish are not breaking, then look for bait balls or suspended fish on your depth finder.

Bottom fishing has been good on both sides of the lower bay for a mix of species. Bloodworms have been the bait of choice although some report good success with artificial bait called Fishbites. White perch are being caught on peeler crab and shrimp along with croakers, kingfish and a few blowfish.

The Maryland Artificial Reef Initiative has been active in the bay this summer with various reef construction projects. Here is the end-of-summer update from Mike Malpezzi, the artificial reef coordinator for the Maryland Department of Natural Resources:

“This summer the Maryland Artificial Reef Initiative was busy placing material at three artificial reef sites in Chesapeake Bay. Three deployments of concrete road barriers, deck slabs and pilings totaling roughly 2,200 tons were placed in the southeast corner of the Love Point site around 39° 03.975’ N, 76° 17.370’ W. At the Tilghman Island site 140 reef balls with oyster spat were placed in a line running east to west near the southwestern edge of the site, centered around 38° 41.330’ N, 76° 22.730’ W. This project was a partnership between Maryland Coastal Conservation Association, Chesapeake Bay Foundation and Maryland Artificial Reef Initiative. At the Plum Point site approximately 100 tons of corrugated steel baffle wall panels and concrete pilings were placed in a “fallen domino” pattern in the southern portion of the site at 38° 35.743’ N, 76° 29.319’ W.”

Before we get into the crabbing, freshwater and ocean sections, here is the weekly bay forecast summary from the team at Click Before You Cast.

Click Before You Cast Weekly Bay Fishing Conditions Forecast Summary – Maryland’s surface water temperatures have dropped 3-4 degrees in the last several days and recent and forecasted windy conditions will aid in bay mixing, resulting in changing conditions. These changes will result in cooler, more well-oxygenated waters for gamefish to search for food. Lots of Maryland waters will have adequate oxygen from surface to bottom so start your search just above the “Do not fish below this depth.” Expect reduced water clarity from higher than normal flows for many streams and river mouths along interstate 95 and east of that location as a result of localized storms earlier in the week. Tidal currents will be increasing between now and Wednesday as we approach the next full moon Wednesday. Submerged aquatic vegetation are at their maximum seasonal coverage right now so be sure to focus on these grass beds which are near channel edges as great places to find hungry gamefish looking for prey.

For the full weekly fishing conditions summary and more detailed and up-to-date fishing conditions in your area of the bay, be sure to check out Eyes on the Bay’s Click Before You Cast. Since this is a new feature for Chesapeake Bay anglers, drop us a line with comments or suggestions.

Recreational crabbers are finding that crabbing action has slowed down in the Severn and Magothy rivers. You may find some better success by running trotlines further south in the West/Rhodes complex and the Deale area, but you have to put in a lot of time and effort.

On the freshwater scene we continue to get reports of largemouth bass, carp and snakeheads in the Angler’s Log. The catch and release trout management waters in western and central Maryland continue to offer fun summertime fishing through the dog days of August with fly fishing gear and a chance to catch and release large brown and rainbow trout. 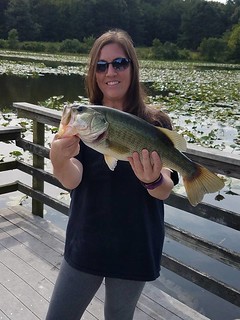 Outside the inlet, larger flounder are being found on the inshore shoal areas and farther offshore at the wreck and reef sites. Sea bass fishing at the inshore wreck sites has been fair and very good out beyond the 30-fathom line to the canyons. On some days, the sea bass bite better, while on other days, the flounder bite better.

On the offshore scene, the mid-Atlantic marlin tournament has wrapped up and the general reports show improved marlin action since early August. There have been numerous white marlin and blue marlin releases near the Washington and Wilmington canyons along with some nice yellowfin tuna and large dolphinfish (mahi-mahi) also coming into the docks. Chicken dolphinfish can often be found near sea bass and lobster buoys near the canyons.

“And the sea will grant each man new hope, as sleep brings dreams of home” – Captain Marko Ramius, played by Sean Connery in “The Hunt for Red October.” Filling in for Keith Lockwood, Erik Zlokovitz is the recreational fisheries outreach and access coordinator for Maryland Department of Natural Resources, Fishing and Boating Services. He is an avid angler and historian of the mid-Atlantic and Chesapeake fisheries and grew up fishing and working on party boats in Long Island Sound, Montauk, the South Shore of Long Island and the Jersey shore starting in the late 1970s. He has been a resident of Maryland since 1996, and fishes all over Maryland, but mostly in the mid-bay area. He has worked with the department since 1998, including a short stint at National Oceanic and Atmospheric Administration-Fisheries headquarters in Silver Spring, 2007-2009. Erik has a bachelor’s degree in Marine Science and Biology from Southampton College in Long Island, New York, and a Master’s Degree in Fisheries Science from University of Maryland-College Park. He did his master’s research on striped bass while based at Chesapeake Biological Lab in Solomons.

Angler Miles Humphries with his first catch, a white perch from the Key Bridge. Photo by Joe Humphries

This is Erik Zlokovitz filling in for Keith Lockwood on the weekly fishing report. As I write this report, there is a disturbance bringing in some rain and winds along the mid-Atlantic coast, but it is nothing compared to the historic flooding being experienced now by the folks in the Houston area, southeast Texas and western Louisiana. The weather forecast here in Maryland is fair to good for the next few days, with rain in the forecast Saturday. We may be entering into a slight cooling pattern, which means that fishing will gradually shift into early fall mode. Take your kids out fishing at least one more time before school starts!