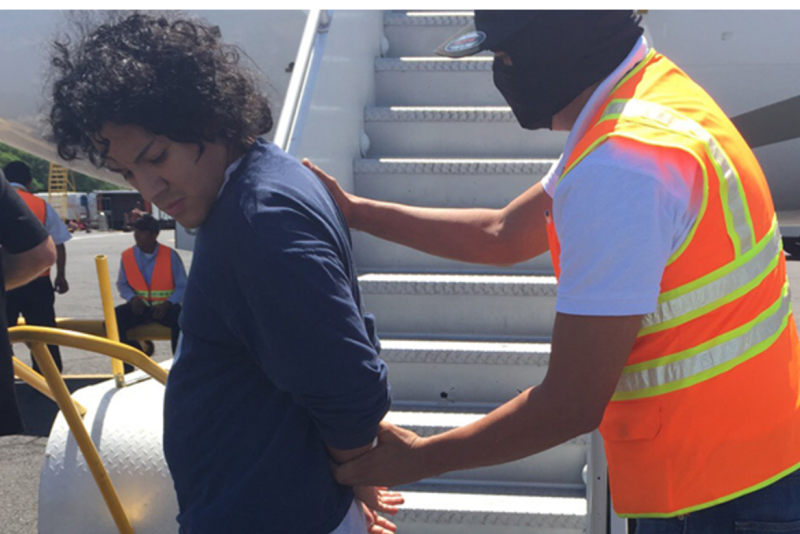 MIAMI – A Salvadoran MS-13 gang member, illegally present in the United States, who is wanted in his native country for attempted aggravated homicide was removed Friday by officers with U.S. Immigration and Customs Enforcement’s (ICE) Enforcement and Removal Operations (ERO).

German Reyes-Benitez, 22, is wanted for attempted aggravated homicide, in El Salvador. On Nov. 29, 2016, Reyes Benitez was ordered removed from the United States by a federal immigration judge.

ERO Miami deportation officers transferred Mr. Reyes from the Krome Detention Center on Thursday to Alexandria, Louisiana, where Mr. Reyes was then removed Friday via an ICE Air charter flight to San Salvador, El Salvador. Upon arrival, Ramos was turned over to officials from El Salvador’s Civilian National Police (PCN).

“Returning any member of a transnational gang who is unlawfully present in the country is a high priority for our agency, especially those who are wanted in their home countries for allegedly committing crimes,” said Marc J. Moore, field office director for ICE ERO in Miami. “ICE will continue to work with our international law enforcement partners in locating fugitives who look to avoid prosecution for crimes that they commit in their homeland. As a result, our communities are safer and more secure.”

ERO El Salvador and Security Alliance for Fugitive Enforcement (SAFE) Initiative were instrumental with providing essential documentation in regards to Mr. Reyes’ history used during his immigrations proceedings that resulted in his removal to El Salvador to face justice for his crime.

Such coordination is possible due to the continued good working relationship the Assistant Attache for Removal in El Salvador is experiencing with El Salvador Immigration (DGME), the PNC, the Ministry of Foreign Affairs, Ministry of Public Health, and Salvadoran Attorney General’s Office. To date, the ERO Office in El Salvador, through the SAFE Initiative, has removed and facilitated the PNC’s ability to arrest more than 800 criminal fugitives to El Salvador.

Since Oct. 1, 2009, ERO has removed more than 1,700 foreign fugitives from the United States who were sought in their native countries for serious crimes, including kidnapping, rape and murder. In fiscal year 2016, ICE conducted 240,255 removals nationwide. Ninety-two percent of individuals removed from the interior of the United States had previously been convicted of a criminal offense.

MIAMI – A Salvadoran MS-13 gang member, illegally present in the United States, who is wanted in his native country for attempted aggravated homicide was removed Friday by officers with U.S. Immigration and Customs Enforcement’s (ICE) Enforcement and Removal Operations (ERO).