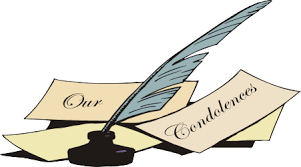 JACKSONVILLE, FL. (July 22, 2017)—Mr.Albert L. Brandt Jr., a former Gloucester City NJ resident, and a graduate of Gloucester City High School, class of 1960 passed away at the Community Hospice Care, Jacksonville, Florida on Friday, July 21, 2017, after a long illness. He was 77 years old and had lived in, Saint John's, Florida for some time.

After school, he worked as a supervisor for the Pretzel Factory which is now Carr’s Hardware store, Broadway, and Paul Streets.  A carpenter by trade he was a member of the South Jersey Carpenters Union, Local 393, Gloucester City.  Brandt owned Colt Concrete and his company built the Sears Center at the Deptford Mall, Deptford, NJ. In 1969 he was hired by Shamrock Construction to supervise the construction of the Strawbridge and Clothier Store, Echelon Mall, Voorhees, NJ.

His friend Bill Tourtual who worked with Brandt, said “Albie never missed a day of work in his life. He worked hard and he played hard. He set a strenuous pace for the rest of us who worked under him.  I was with him when he almost lost his life. We were working in an elevator shaft on the Delaware Court House, just the two of us. Not much room at all. Below us was a two-foot dow rod sticking up in the air from a piece of concrete. Al slipped falling 30 feet down the shaft. As he was falling his body does a complete turn and lands sideways on solid concrete just inches from being impaled on that rod. After Shamrock went out of business, he traveled with some other union carpenters to Florida to take advantage of the construction boom in that state where he eventually retired.”

Albie was a known pool shark. Growing up he lived in the 200 block of Bergen Street a block away was Augie’s Pool Room on Burlington Street where the Sportsmen’s Club is located. He was in charge of renting out the tables and spent a lot of his spare time on the front table, where the money games were played. He rarely lost a game.

Tourtual remembered when they were working on the Delaware Court House they went to a nearby bar to eat lunch. “We were playing a game of pool when this guy asked if either of us wanted to shoot a game of eight ball for $2 a game. Al told me a lot of guys will “apple” when the stakes were raised. He says to the guy lets raise the bet to $20 we will play one game explaining we had to get back to work. He whispers to me get ready to leave I’m going to sink the eight ball on the break. I do it three times out of five. True to his word he knocks in the eight ball grabs the $20 and we run out the door. You can imagine the other guy's reaction to just being hustled.” 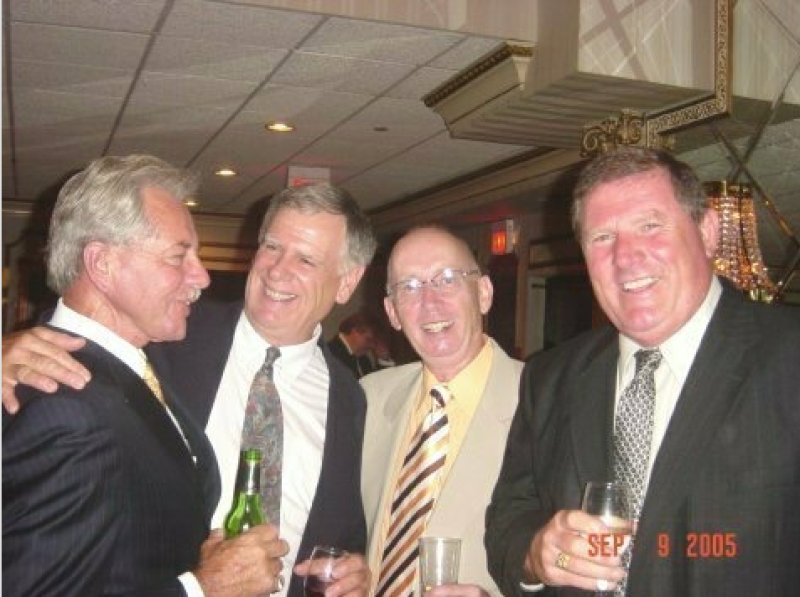 Al Brandt, with friends Marty Sherry, Bill Cleary and Ron Henefer. The occasion was the wedding of Al and Cookies' daughter Cindy (September 2005) 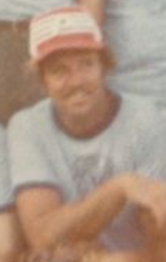 where he had been for the past three weeks. "Cindy told me that she was sure Al, who was in a coma, knew she was there.  Al would visit us every four months. He would spend some time with me and then spend the rest of the time with his children. He loved them so and missed them. Before Al got so sick young Al took his two boys down to visit with their grandfather and he reminisced about his Little League career.

Albie played on the Gloucester City Little League All Stars who almost made it to the 1954 Little League World Series. A few years back he came to the 60th reunion of that team held at Vitale’s in Gloucester. He enjoyed that so much.” 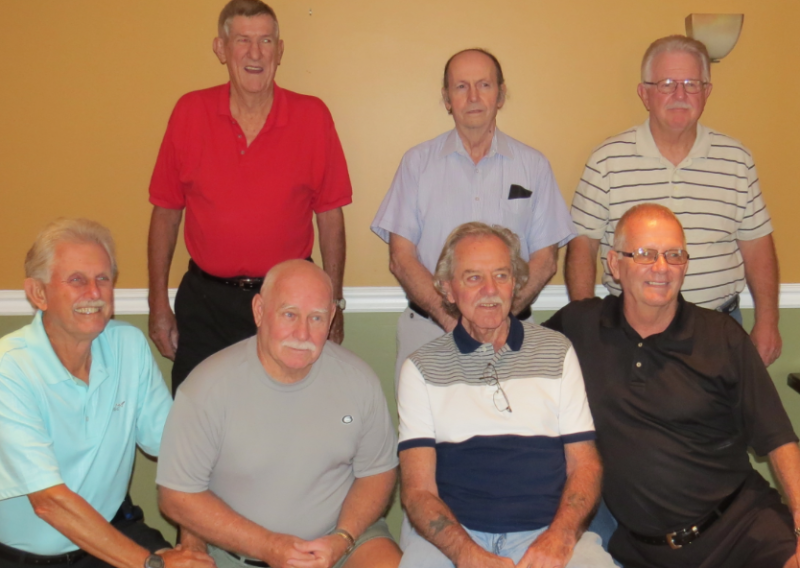 She said about 8 years ago he was helping a neighbor repair a roof when he fell off the ladder. “Albie was always the first to volunteer to help someone. We don't know how long he laid on the ground before they found him. But after that accident, he was never the same. His speech was slurred and he had a tough time walking. He would fall sometimes without warning. But he didn’t let that stop him from tending the garden. Even though it was a hot day he liked doing that.” 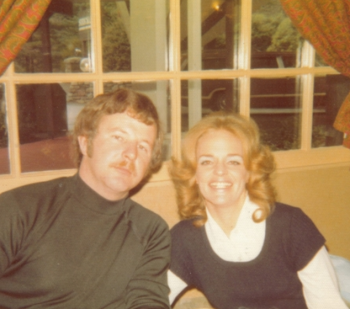 Bob and Janet Bevan in 1973 on the yearly Pocono Mountain trip with the Clearys, Henefers, and Sherrys' families
(Connie Cleary photo)

Mountains with Albie and Cookie, Bob and Janet Bevan, Ron and Donna Henefer and Mart and Claudia Sherry.

"We would pack up our kids and head to a rental ski lodge near Camelback Mountain in the Poconos. We arrive on Friday afternoon and spend the weekend on the slopes. The kids all learned to ski but the adults tried but were not too successful. Instead, they ended up on little ski bobs, a type of sled with handle bars. Seeing these grown men and women flying down the hill laughing their heads off was a funny site.  Albie, Ron, and Marty each had a loud hearty laugh that would echo across the mountain. Al is the third guy from the west side of Gloucester that died in the month of July. Prior to him, Harry Blymer passed away on July 8, and Joe DiGiacomo died on July 9. They all lived within blocks of each other, hung out at the same luncheonettes and local bars. Joe was best man in Albie and Cookies' wedding.  Jim Nicholson retired Philadelphia Daily News obituary writer said to me today, "Each generation has their own turn on the obituary page. "It's now the "Baby Boomer's time to take over that page.," Nicholson said. How true that is. " (see Editor's Note Below)

Related article: Lifetime Friends Harry Blymer and Joe DiGiacomo Die Within 24-Hours of Each Other

“His final wish was to be cremated and have his ashes spread where the Gloucester Pool once stood at Proprietors Park,” said Cookie. “In his heart, he never left Gloucester City and his memories were always those “Happy Days” growing up in his hometown.”

The estimated 78.8 million baby boomers counted at the peak — including those who later immigrated to the U.S. — are beginning to face death in larger numbers and at a more frequent pace. A Pew Research Center report in April stated that the number of boomers had decreased to 74.9 million in 2015, and that “by midcentury, the boomer population will dwindle to 16.6 million.” In the same report, it was noted that millennials — those born between 1981 and 1998 — have replaced boomers as the largest generation. They now number 75.4 million. ((source Baby Boomer "Die-Off")

Baby boomers are the demographic cohort following the Silent Generation. There are no precise dates when the cohort birth years start and end. Typically, they range from the early-to-mid 1940s and end from 1960 to 1964. Increased birth rates were observed during the post–World War II baby boom, making the baby boomers a relatively large demographic cohort. Wikipedia

A TRIBUTE TO DENISE SARLO KRUEGER

The Building May Be Gone, But The Memories Linger On

JACKSONVILLE, FL. (July 22, 2017)—Mr.Albert L. Brandt Jr., a former Gloucester City NJ resident, and a graduate of Gloucester City High School, class of 1960 passed away at the Community Hospice Care, Jacksonville, Florida on Friday, July 21, 2017, after a long illness. He was 77 years old and had lived in, Saint John's, Florida for some time.

After school, he worked as a supervisor for the Pretzel Factory which is now Carr’s Hardware store, Broadway, and Paul Streets.  A carpenter by trade he was a member of the South Jersey Carpenters Union, Local 393, Gloucester City.  Brandt owned Colt Concrete and his company built the Sears Center at the Deptford Mall, Deptford, NJ. In 1969 he was hired by Shamrock Construction to supervise the construction of the Strawbridge and Clothier Store, Echelon Mall, Voorhees, NJ.