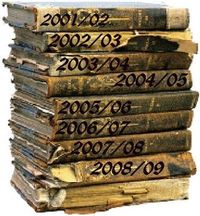 I am feeling my age, I have brown spots all over me but I still remember Coaches Billy Flynn, George Thorpe, Bob Mc Quillen, Carlos Paisley, Steve Shimkus and now Leon Harris. I have seen and heard many things from parents and the players who have crossed the fields of Gloucester City. But, I have remained silent through the years and it is the time that parents start to listen.

Everyone has heard about being a fly on the wall. Oh, what you would have heard. If only these walls could talk? Can't imagine what secrets they have! Well, after many years of lying around patiently I have decided to let everyone in on a little secret. This field has heard it all!

Gloucester City does not have a large number of home-grown professional athletes. That is correct! Very few if any, have made the Big Show in the MLB, NFL or NBA. Yes, that is a fact. Do the research yourself.  But, still, Gloucester parents refuse to face reality.  Your son may be a terrific athlete locally and you should be proud of that. But, on a larger level your son is in the majority of athletes whose career was limited to local competition.

I remember when you started in Tee Ball. I saw the excitement on your face when you and your teammates ended each Tee Ball game as 5 & 6 years old with a tie. It was not until later that you realized WHY each game ended in a tie. Parents, grandparents, aunts, and uncles would come to each game cheering you along.

But slowly things changed.  The Coach Pitch league brought championships; your midget football team had an "A" team for the better kids and "B" for the ones who needed extra work. Basketball went from 8' baskets to 10' baskets.

Yes, I must say this is where the stories begin. About age 7, 8 or 9 you as a player heard your parent's talk about how much better of a player you were then your teammate's and best friend. Your parents were tempting you to take the bait and agree you were better and that you should play before the other players. Remember how you felt when they spoke about your friends and teammates? Pretty bad!

But, as time went by and you moved up each level the competition got better. You entered high school as a talented athlete. Your parents made sure of this through their dedication to your sports endeavors. You went through your high school athletic career never realizing that someone overheard these conversations. I heard when your parents were talking about other athletes being the coach's favorites and that was the only reason they played. Never giving another player credit while you sat watching.

You enjoyed your years as a student - athlete at GHS or GCHS. You were excited when you won championships, but at times your team faced the losing side of championships as well. Boy, remember that Thanksgiving game in 1971? I still think John Chiodi scored in the rain at Delsea. This followed at 1971 one point loss in the State Basketball Championship.  How about Brandt to Grant?

Upon graduation, you pursued a career, married and started a family of your own. Boy, how quickly your own little boy has grown to be that 5 & 6-year-old athlete. Now as the years passed and your boy has grown older, I have heard every word from you. You are now the next generation and now speak like their parents.

As you roamed the field, I heard everything you had to say. Yes, this field can hear and talk. Between you and the field, I must say you are turning into your parents. You grumble that your son is not getting a fair shot. You are telling other parents that the only reason that "Joey" is pitching is that his father is the Little League Coach. When your son entered High School you were upset because "Johnny" was the QB. But you forgot how it hurt when your own parents spoke about other players who were your best friend and why they were playing. Now you are doing the same, making excuses why your son is not the star player. "Billy" was a better player in the coach's eyes than your son when it came to basketball.

Did you forget how you were part of the TEAM that won the Championship? You forgot how hard and extra work paid off for each player. You forgot that even though you loved the sport in the season you were not as dedicated as some of the other athletes. Yes, you enjoyed your High School years. You don't regret a moment of your time there. You forgot when your best friend scored that winning touchdown and the enjoyment everyone experienced. Yes, I your own eyes you was a team player.

Yes, now another generation later you as a parent are carrying on the dreaded tradition of not accepting that some other player may REALLY be better than your son. You own boy now walks on me, he understands what is best for his team. He loves being a big or even small part of his team.

As a grassed playing surface, I have heard it all. You cannot just enjoy the entertainment on the field by these young men, without talking about why "Mike" is running the ball as a team player chosen by his coach's? Maybe "Mike" deserves to be there? I am asking that the next time you walk out on the field. Feel the softness of my grass, stop and listen closely to what I have to say. You can speak to me, I hear everything. I know you know the truth, I know you love your son and want nothing but the best. There is nothing wrong with that, but talking about another parent's son is hurtful. THEY LIKE YOU dedicated their lives to the same cause as you, giving their son the best. They have given their time when they did not have any to give, JUST LIKE YOU.

Yes, you are acting the same your parents! Give that Athlete other than your son the same encouragement you would give your own son. It never was and never is about favoritism. It is all about winning. You enjoy those Saturday's when your team competes. You still you’re your school to win. And in 4 short years,  your son will move from High School and his friends onto another career and like you will start a family of his own.

Yes, this field did hear you and I am very proud to have been a part of you and your son's life. So next week when your Lions, Rams or Mustangs take the field, let's support all the players. I would love to see the Coach call out your son's number.

It is all about these players and you parents. We are a united group with one goal, having your team win. Well, I enjoyed our conversation and if I could I would like to ask you for one other little favor, can you keep these geese off of me?

It is amazing you hit this right on the head. The parents are brutal, the coaches are brutal and I feel bad for the kids. The kids are the one who hears all these comments not only from the parents that are not involved but also from the parents that are involved. In every sport in every spectrum, you can hear the parents bickering over where their child should be playing, how this kid stinks. It is really a shame that we all can't be better role models for our children. The players need to go out and have fun as well as be taught the fundamentals of the game.

This isn't only in HS, the sad part is the youth leagues and what goes on. Starting at 5 & 6 years old some of these coaches only care about wining, I would think at this age in any sport it should be about fundamentals and fun for these boys and girls, let's not forget the female athletes too.
Kids sit the bench the entire time during some sports at such a young age and that's pathetic these kids should be getting the same amount of playing time and equal treatment at practice. Some of the parents that coach their own kids are OUT OF CONTROL they treat these kids like crap and you can see the sadness in their eyes. They try to re-live their youth in their kids and it's horrible. It's heartbreaking. Not to mention it makes kids not want to come back and play the following year or even finish out the season. SAD SAD SAD!

I am feeling my age, I have brown spots all over me but I still remember Coaches Billy Flynn, George Thorpe, Bob Mc Quillen, Carlos Paisley, Steve Shimkus and now Leon Harris. I have seen and heard many things from parents and the players who have crossed the fields of Gloucester City. But, I have remained silent through the years and it is the time that parents start to listen.