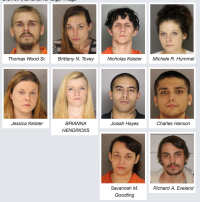 A statewide investigating grand jury identified Charles “Chip” Hanson, 23, as the main target of a 15-month investigation that was conducted by the Office of Attorney General’s East Drug Task Force, local authorities in Snyder County and other law enforcement agencies.

Hanson distributed methamphetamine and taught others how to make it. He is also accused of utilizing meth users to purchase so-called precursors — Sudafed tablets, crystal drain cleaner, lighter fluid and other items — that were used in the manufacturing of methamphetamine.

“This investigation involved drug dealers who produced highly-volatile drugs at a motel and in at least one residence where a child was living,” Attorney General Shapiro said at a news conference today. “These dealers put an innocent child and others at risk. Our work with District Attorney Piecuch and other law enforcement agencies led to the dismantling of a major methamphetamine ring. As I’ve said before, we’ll remain merciless with the dealers peddling these poisons in our communities.”

“Through this multi-agency investigation, a major regional source of meth has been identified and eliminated,” District Attorney Piecuch said. “The dangers can't be understated, not just from the addiction perspective, but from the explosive chemicals used in its manufacture. It's bad enough that these people put themselves at risk, but they exposed innocent neighboring families as well. I want to thank all the law enforcement officers who helped bring those responsible to justice.”

This investigation began following a number of incidents, including the discovery on Feb. 12, 2016 of a methamphetamine lab at the Golden Arrow Motel in Shamokin Dam, Snyder County. The Pennsylvania State Police Clandestine Lab Response Team analyzed and disposed of the lab, later linked to Hanson.

Investigators began tracking the purchase of Sudafed, or its generic equivalent, in Northumberland, Snyder and Union counties. From sales at various pharmacies, they identified several individuals who were buying precursors for Hanson.

Investigators discovered Hanson was manufacturing methamphetamine in a residence where an 8-year-old girl was living. This led to charges of endangering the welfare of a child against two of Hanson’s co-defendants, Nicholas Keister and Michele Hummel, whom Hanson moved in with in 2016.

The following defendants are charged with possession of methamphetamine with intent to deliver and related charges:

“This case is a strong example of law enforcement cooperation,” Attorney General Shapiro said. “We thank the district attorneys of Snyder and Union counties, the Pennsylvania State Police, and every local police agency that assisted in this meth ring investigation.”

These cases will be prosecuted by District Attorney Piecuch, who has been designated as a special deputy attorney general, and OAG Senior Deputy Attorney General David Gorman.

A statewide investigating grand jury identified Charles “Chip” Hanson, 23, as the main target of a 15-month investigation that was conducted by the Office of Attorney General’s East Drug Task Force, local authorities in Snyder County and other law enforcement agencies.