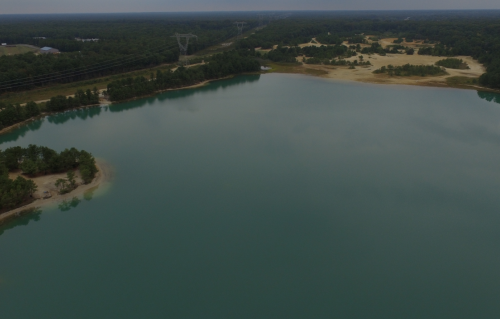 Winslow Township Police Department in conjunction with the New Jersey Division of Fish and Gaming conducted a weekend long patrol of the State owned quarry along Piney Hollow Road (photo above provided). The patrols were targeting illegal activities on State owned property. 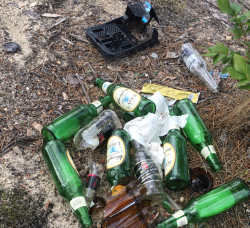 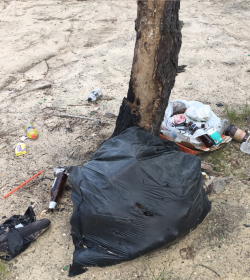 Most of the posts on our comments section stated that the "ATV riders should just stay home and do drugs since we were taking their fun away." We can not believe this mentality and thought process. During our patrols we found the amount of visitors to the area was extremely low.

We contribute this to the Facebook post announcing that we would be conducting patrols in the area. Fish and Wildlife officers also were amazed at the low turn out to the quarry during this Memorial Day weekend which otherwise would have been packed. This Quarry is open to the public for legal activities such as fishing and nature walks. We encountered many families with their children during our patrols.

Properly registered and insured vehicles are welcome to the area.

Unfortunately, all to many people who do visit the quarry by leave behind trash and huge amounts of empty beer and wine bottles that are scattered over the entire property. Drinking alcoholic beverages in this area is strictly prohibited. 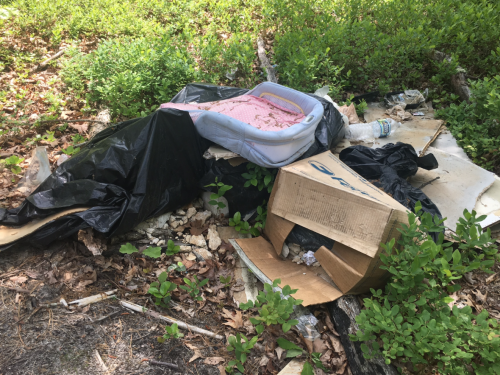 During the patrols, officers from the Division of Fish and Wildlife issued (14) fourteen summonses for open consumption of alcohol and setting up campsites. This is not an area open for camping. Winslow Township officers arrested (1) one individual for possession and distribution of drugs and (5) five others were arrested for drug possession. (9) nine people were issued citations for drinking in public and in vehicles, (2) two arrested for outstanding warrants and (2) two people were cited for trespassing related to activities not permitted on the property.

One individual arrested on a drug charge told officers, "I should have known better, I saw this online and this explains why no one is here." During our patrol, Winslow officers confronted a shirtless ATV rider wearing sandals. When he approached officers he accelerated his ATV striking and ATV being operated by officer. The ATV operator was stopped and a citation was issued. His ATV was impounded until ownership paperwork can be provided. This ATV rider was the only ATV operator cited.

On another occasion a frantic call came into Central Police Communications by 9-1-1. The female caller was in complete hysteria stating to 9-1-1 communicators that she was being drug by a vehicle. No other information could be obtained other than the call call was place by cell phone and the caller was in the area of the quarry. The information was passed on to ATV patrol officers in the area. The accused male who was highly intoxicated was located by ATV officers. The male fled into the rear of a business and attempted to flee from the officers. The ATV patrols flushed the accused male out to uniformed offices in the quarry area where he was placed under arrest for assaulting the female. The male was already wearing an electronic monitoring bracelet placed on him from the courts. He was processed ans sent to the Camden County Jail for assaulting his female companion.

During our patrols, we encountered and spoke to many friendly people in the area who were glad to see our presence. We warned families with small children of the dangers of going into the water because of the steep drop offs and the past drownings in the quarry. Again, we don't want to discourage families and people of all ages from visiting the area. You are allowed to be in the area with motor vehicles which are properly registered and insured. If you do visit, please do not leave any trash behind. And to hundreds of people who complained about our proactive patrols on Facebook, we would like to say, you are either be part of the problem or part of the solution. If you want to be part of the problem you will be cited for your illegal activity. Patrols of the area will continue throughout the summer.

For more information on what you can and can't do on State grounds, please visit the New Jersey Division of Fish and Game Regulations page online at http://www.njfishandwildlife.com/wmaregs.htm

Winslow Township Police Department in conjunction with the New Jersey Division of Fish and Gaming conducted a weekend long patrol of the State owned quarry along Piney Hollow Road (photo above provided). The patrols were targeting illegal activities on State owned property.