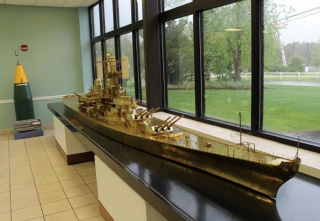 The South Jersey Regional Transportation Authority proudly displays a 22-foot scale model of the USS New Jersey at its Frank S. Farley Service Plaza on the Atlantic City Expressway in conjunction with HMS Host, concession manager for the plaza. The model is provided courtesy of the Battleship Museum and Memorial in Camden, NJ (SJTA Photo/Mark Amorosi).

HAMMONTON, NJ   -- The South Jersey Transportation Authority in partnership with concession manager HMS Host accepted a 22-foot replica of the Battleship New Jersey for public display at the Frank S. Farley Service Plaza on the  Atlantic City Expressway (ACE), milepost 21.3, courtesy of the ship museum and memorial in Camden, NJ.

Made of brass, the model was first constructed to test radio waves for the US Navy, prior to the ship's re-commissioning in 1981. The impressive and detailed 22 foot-long model built on 1/48 scale allowed the Navy to monitor antenna response patterns for a given frequency between ships of the battleship class.

The model had been housed at the Battleship New Jersey Museum and Memorial on the Camden Waterfront, NJ, and is on loan from the Department of the Navy, Space and Naval Warfare Systems Center in California.

The Museum offered to display the impressive model at the Farely Service Plaza as a way to promote the battleship's presence to travelers, which is located within easy access of the Expressway's western terminus in Camden County.

"We are extremely grateful to the museum for sharing this important piece of New Jersey and American history," said SJTA Executive Director Stephen F. Dougherty.

The USS New Jersey played a vital role in the Pacific during WWII and was reactivated to serve in the Korean and Vietnam conflicts decades later. It was returned to active duty in 1982 as part of President Ronald Reagan's naval build up and was called on to support American forces and interests during the Lebanese civil war and received the last of her 19 Battle Stars during the Persian Gulf War.

The battleship was decommissioned for the last time in 1991 and was eventually donated by the Navy to the Home Port Alliance of Camden, N.J., for use as a museum and memorial in 2000. The Battleship New Jersey, America's most decorated battleship, opened for tours in October 2001.  Since then, millions of guests have experienced tours, group packages, educational programs, special events and overnight aboard the Big J.

"This model of the USS New Jersey in addition to our 9/11 memorial, which opened last year, is making our service plaza a great place for travelers and their families to stop and see while they enjoy the other amenities available at our rest stop. It's almost becoming a destination in itself," said Dougherty.

Located on the Delaware River, along the Camden Waterfront across from the City of  Philadelphia, the Battleship is open every day for tours from 9:30am to 3pm in April. The Battleship will remain open to 5pm beginning on May 1. Explore the Turret II Experience! Hoist projectiles, load powder bags, plot a firing solution, pull the trigger and fire these legendary guns, even take a Walk Down Broadway! Guided Turret II tours launch at 11am on Saturdays and Sundays.  To purchase tickets, visit www.battleshipnewjersey.org . For more information, call 866-877-6262

The South Jersey Regional Transportation Authority proudly displays a 22-foot scale model of the USS New Jersey at its Frank S. Farley Service Plaza on the Atlantic City Expressway in conjunction with HMS Host, concession manager for the plaza. The model is provided courtesy of the Battleship Museum and Memorial in Camden, NJ (SJTA Photo/Mark Amorosi).