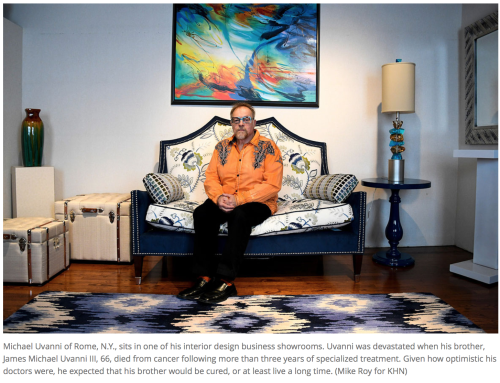 After Michael Uvanni’s older brother, James, was diagnosed with a deadly form of skin cancer, it seemed as if everyone told the family what they wanted to hear: Have hope. You can beat this, and we are here to help.

The brothers met with doctors at a half-dozen of the country’s best hospitals, all with impressive credentials that inspired confidence.

Michael Uvanni was in awe when he visited the University of Texas MD Anderson Cancer Center in Houston, one of the world’s most respected cancer hospitals. It was like seeing the Grand Canyon, said Uvanni, 66, of Rome, N.Y. “You never get used to the size and scope.”

Even the MD Anderson logo on buses and buildings — with “Cancer” crossed out in red, above the words “Making cancer history” — made the family’s battle seem winnable.

“I thought they were going to save him,” said Uvanni, an interior designer.

Patients and families are bombarded with the news that the country is winning the war against cancer. The news media hypes research results to attract readers. Drug companies promise “a chance to live longer” to boost sales. Hospitals woo paying customers with ads that appeal to patients’ fears and hopes.

“I’m starting to hear more and more that we are better than I think we really are,” said Dr. Otis Brawley, chief medical officer at the American Cancer Society. “We’re starting to believe our own bullshit.”

The consequences are real — and they can be deadly. Patients and their families have bought into treatments that either don’t work, cost a fortune or cause life-threatening side effects.

“We have a lot of patients who spend their families into bankruptcy getting a hyped therapy that [many] know is worthless,” Brawley said. Some choose a medicine that “has a lot of hype around it and unfortunately lose their chance for a cure.”

Although scientists have made important strides in recent years, and many early-stage cancers can now be cured, most of those with advanced cancer eventually die of their disease.

For Uvanni, hope gave way to crushing disappointment when his brother’s health declined and he died from metastatic melanoma in 2014.

“You get your hopes up, and then you are dropped off the edge of a cliff,” said Uvanni. “That’s the worst thing in the world.”

Caregivers like Uvanni can suffer prolonged grief and guilt if their loved ones are riddled with side effects and don’t survive as long as the family expected, noted Holly Prigerson, co-director of the Center for Research on End-of-Life Care at Weill Cornell Medical College.

For decades, researchers have rolled out new cancer therapies with great fanfare, announcing that science has at last found a key to ending one of the world’s great plagues, said Dr. Vinay Prasad, an assistant professor of medicine at Oregon Health & Science University. When such efforts fail to live up to expectations, the cancer world simply moves on to the next big idea.

Hyping early scientific results — based on lab tests or animal studies — can attract investors that allow researchers to continue their work. Positive results can lead biotech firms to be bought out by larger drug companies.

“It’s in the interest of almost every stakeholder in the health system to be optimistic about these therapies,” said Dr. Walid Gellad, co-director of the Center for Pharmaceutical Policy and Prescribing at the University of Pittsburgh.

Of course, there is plenty of money to be made.

The U.S. spent nearly $88 billion treating cancer in 2014, with patients paying nearly $4 billion out-of-pocket, according to the American Cancer Society Cancer Action Network. Spending on cancer, a disease that most afflicts the aging, is predicted to soar as people live longer.

“While many people are trying to make patients’ lives healthier and longer and better, there are others that are exploiting their vulnerability,” said Dr. Leonard Saltz, chief of the gastrointestinal oncology service at New York’s Memorial Sloan Kettering Cancer Center.

Others argue that the excitement about cancer research is justified. A spokeswoman for the Pharmaceutical Research and Manufacturers of America, an industry group, said cancer patients have good reason for optimism.

“We continue to see great strides in identifying the genetic mutations and related factors that can drive the seemingly random formation of abnormal cells in cancer,” spokeswoman Holly Campbell said in a statement. “In the last decade, we’ve seen a number of scientific advances transform the landscape of many cancers.”

Even the country’s top scientists sometimes get carried away.

In 1998, Nobel laureate James Watson — who co-discovered the structure of DNA — told The New York Times that scientists would “cure cancer in two years” using drugs that block tumor blood supplies. At that time, the drugs had succeeded only in mice.

In 2003, the director of the National Cancer Institute, Dr. Andrew von Eschenbach, announced a goal of “eliminating suffering and death due to cancer by 2015” by better understanding tumor genetics.

Last year, when President Barack Obama announced the Cancer Moonshot, which aims to accelerate and better coordinate research, he said, “Let’s make America the country that cures cancer once and for all.”

In a recent interview, von Eschenbach acknowledged he didn’t communicate his goal well.

“We all fall into that trap,” said von Eschenbach, now a senior fellow at the Milken Institute, a health and public policy think tank. “We’re offering what we have, but making it appear that it’s more than what it is.”

It’s easy to see how patients’ hopes are raised, said Timothy Turnham, former executive director at the Melanoma Research Foundation, an advocacy group. Researchers are frequently overly enthusiastic about early discoveries that have little chance of leading to a new drug.

“There is a disconnect between what researchers think is statistically significant and what is really significant for patients,” Turnham said. “Patients hear ‘progress,’ and they think that means they’re going to be cured.”

A TV ad for Merck’s Keytruda features reassuring images of a smiling, healthy patient hugging her family — not fighting for breath or struggling to walk. Although the commercial notes that the people in the ad are portrayed by actors, the commercial claims the drug provides “a chance for a longer life. It’s Tru.”

“Your heart sinks when you see those ads,” Uvanni said. Seeing the family depicted in the ad, he said “makes you wonder if they’re going down the same path that we did.”

The Keytruda ad notes that 71 percent of patients given the drug were alive “at the time of patient follow-up,” compared with 58 percent of those who received chemotherapy. The ad doesn’t mention that the “time of follow-up” was 11 months.

“It’s not false; it’s just incomplete,” said pharmacist Harold DeMonaco, a visiting scientist at the Massachusetts Institute of Technology in Boston. “They don’t give patients or the patients’ family enough information to make a reasonable decision.”

In an interview, Merck senior vice president Jill DeSimone said that the company aims to be responsible with its advertising, noting that the Keytruda ad reminds patients to talk to their doctors. “The physician is the ultimate decider on treatment,” DeSimone said.

In a statement, Bristol-Myers’ senior vice president Teresa Bitetti said that Opdivo ads play “an important role in educating patients about new treatment options and fostering informed conversations between patients and their doctors.”

Hospitals also have drawn criticism for overstating their success in treating cancer. In 1996, Cancer Treatment Centers of America, a for-profit chain, settled allegations from the Federal Trade Commission that “they made false and unsubstantiated claims in advertising and promoting their cancer treatments.”

The company’s current commercials — dozens of which are featured on their website — boast of offering “genomic testing” and “precision cancer treatment.”

The commercials don’t tell patients that these tests — which aim to pair cancer patients with drugs that target the specific mutations in their tumors — are rarely successful, Prasad said. In clinical trials, these tests have matched only 6.4 percent of patients with a drug, according to Prasad’s 2016 article in Nature. Because these drugs only manage to shrink a fraction of tumors, Prasad estimates that just 1.5 percent of patients actually benefit from precision oncology.

In a statement, Cancer Treatment Centers of America said, “We use national media to help educate cancer patients and their families about the latest diagnostic tools and treatment options. … All of our advertising undergoes meticulous review for clinical accuracy as well as legal approval to ensure we tell our story in an informative and responsible manner, and in compliance with federal guidelines.”

Spending on ads for hospitals that treat cancer soared 220 percent from $54 million in 2005 to $173 million in 2014, according to a 2016 article in JAMA Internal Medicine. Ads for Cancer Treatment Centers of America accounted for nearly 60 percent of all total cancer center advertising.

For more than a decade, the Food and Drug Administration approved no new treatments for metastatic melanoma. Patients typically died within a year of diagnosis.

Since 2011, however, the FDA has approved 11 new treatments, including several immunotherapies, which aim to harness the immune system to fight cancer. Last year, doctors leading a clinical trial announced that the median survival of patients taking the drug Keytruda had grown to two years. Forty percent of patients were alive three years later, according to the clinical trial, presented at the American Society of Clinical Oncology.

Researchers have tested immunotherapies against a variety of tumors, leading to approvals in lung cancer, kidney cancer, bladder cancer and others.

Such success has led doctors to label cancer immunotherapy as a “game changer.” N­­ewspapers and magazines call it a “breakthrough.” And hospitals laud them as “a miracle in the making.”

Yet these treatments — which were initially assumed to be gentler than chemotherapy — can provoke fatal immune system attacks on the lungs, kidneys, heart and other organs.

And there are no approved immunotherapies for tumors of the breast, colon, prostate and pancreas.

Only about 10 percent of all cancer patients can expect to benefit from immunotherapy, Prasad said.

Uvanni’s brother — who tried immunotherapy, as well as a number of other approved and experimental treatments — survived 3½ years after his diagnosis. That might lead many oncologists to describe his story as a success.

Uvanni sees no reason to celebrate. He wanted more than short-term survival for his brother.

“I thought we were going to have a treatment where we’d at least have a good block of quality time,” Uvanni said.

But treatments meant to control the cancer only made him sick. Some caused flu-like symptoms, with fever, chills and shakes. Others left him nauseated, unable to eat or move his bowels. Others caused dangerous infections that sent him to the emergency room.

“I hope that if something like that happens to me,” Uvanni said, “I would be strong enough to say no to treatment.”

After Michael Uvanni’s older brother, James, was diagnosed with a deadly form of skin cancer, it seemed as if everyone told the family what they wanted to hear: Have hope. You can beat this, and we are here to help.