The Scourge of Child Pornography

Working to Stop the Sexual Exploitation of Children 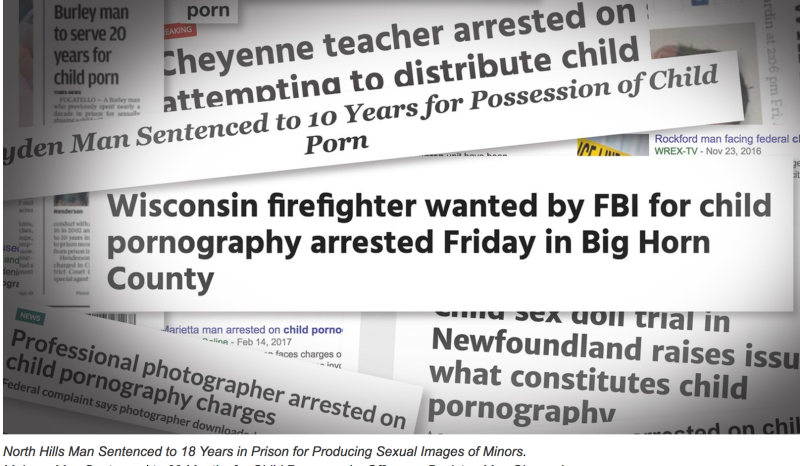 Rarely a week goes by in the United States that a child pornographer is not charged or sentenced for federal crimes related to the sexual exploitation of children. The press release headlines above from the Department of Justice were issued on a single day last month.

In coordination with local, state, federal, and international partners—both law enforcement and non-governmental organizations—the FBI devotes extensive resources to fighting the sexual exploitation of children. And while the high number of arrests and convictions speaks to law enforcement’s successes, there is still much work to be done. According to a 2016 Department of Justice report to Congress, “The expansion of the Internet has led to an explosion in the market for child pornography.”

“After you’ve been doing this awhile, you think you’ve seen it all, and then you get a new case,” said Special Agent Eric Campbell, who investigates violent crimes against children in the FBI’s Phoenix Division. “I am surprised by how often I am surprised at what people will do.”

Campbell points to one of his recent cases as an example. In February 2017, a 28-year-old Arizona woman was sentenced to more than five years in prison for mailing child pornography to her imprisoned husband. He was behind bars in Tucson awaiting trial on separate child pornography charges—for which he would eventually receive a 20-year sentence.

Some of the images the woman mailed her husband were of girls as young as 9 years old. “She was trying to sneak them into the prison,” Campbell said, “trying to give her husband what he wanted.”

The FBI coordinates its efforts to protect children through the Violent Crimes Against Children (VCAC) program. The mission is to lower the vulnerability of children to sexual exploitation, to provide a rapid and effective investigative response to such crimes, and to provide appropriate training and other resources to state and local law enforcement partners.

Investigations are conducted in each of the FBI’s 56 field offices by Child Exploitation Task Forces, which combine Bureau resources with those of other federal, state, and local law enforcement agencies. Nearly 400 law enforcement partner organizations participate in these task forces and are assisted by FBI intelligence analysts, victim specialists, and subject matter experts. The task forces also work closely with the National Center for Missing & Exploited Children (NCMEC).

In addition, because the Internet has blurred traditional notions of borders and jurisdiction, the FBI’s legal attaché offices in more than 60 countries around the world coordinate with their foreign counterparts on investigations ranging from child sex trafficking to sex tourism.

Those who engage in the production and distribution of child pornography come from all walks of life and represent varied ages, races, occupations, and education levels. Typically, their crimes are carried out on the so-called dark web—where they can remain anonymous—and their actions are unknown to spouses, families, and associates.

“Most of these guys don’t have any criminal history,” Campbell said, “and no one has any idea of what they were doing until we catch them.” The agent said that the work he and his colleagues do is important, but also emotionally wrenching. “The payoff,” he explained, “is that you are able to uncover these perpetrators and shine a light on them, and do everything possible to make sure they are no longer able to victimize innocent children.”

“After you’ve been doing this awhile, you think you’ve seen it all, and then you get a new case.”

Shining a Light on Child Pornography

The producers and consumers of child pornography operate in the shadows, and anonymous Internet networks such as Tor often allow them to carry out their illicit activities without fear of being unmasked and caught. Below is a glimpse of the enormity of the problem (compiled in a 2016 report to Congress by the Department of Justice called The National Strategy for Child Exploitation Prevention and Interdiction:

The Scourge of Child Pornography

Working to Stop the Sexual Exploitation of Children