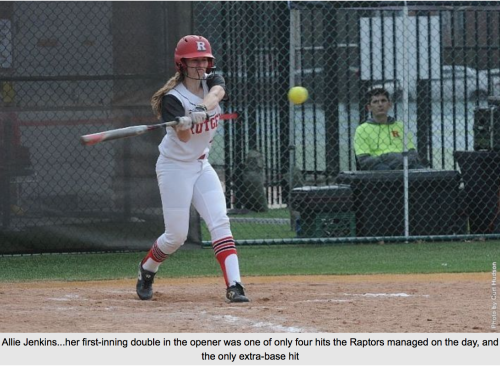 WASHINGTON, D.C. (March 30, 2017) – The Rutgers University-Camden softball team made the long trip to the nation's capital, but the Scarlet Raptors' offense took a detour here Thursday.

Rutgers-Camden managed only two hits in each game as it lost a non-conference doubleheader against Catholic University of America, 3-0 and 11-1. The second game was stopped in the fifth inning by the eight-run rule.

Catholic improves to 12-6, running its winning streak to four games. Rutgers-Camden falls to 8-10, extending its losing streak to three games.

In the opening game, Catholic sophomore righty Kelly Lynch (Eldersburg, MD/Seton Keough) tossed a two-hit shutout to win a pitchers' duel over Raptor sophomore southpaw Jessica Thompson (Pedricktown, NJ/Penns Grove). Thompson hurled a four-hitter and allowed only one earned run, as the Cardinals took advantage of three Raptor errors in the first two innings to score an unearned run in each frame.

Junior centerfielder Rachel Valdes (Miami, FL/Westminster Christian) singled home an unearned run in the first inning, had another single in the third and capped her game with a fifth-inning sacrifice fly. She went 2-for-2 with two RBIs for Catholic.

Thompson (3-5), has been victimized by four shutouts in her five losses. She walked two and struck out one.

The only hits by the Raptors were a two-out first-inning double by sophomore rightfielder Allie Jenkins (Delanco, NJ/Riverside) and a one-out single in the seventh by freshman designated player Valorie Velasco (Cherry Hill, NJ/Cherry Hill East). Lynch (6-3) finished with three walks and two strikeouts.

Thompson (3-6) started the nightcap for the Scarlet Raptors as well, but the Cardinals produced four hits and took advantage of two walks and an error to plate four first-inning runs. Valdes, once again, was at the center of the action with a two-run double.

Freshman righty Sabrina Scott (Medford, NJ/Shawnee) allowed only a pair of singles over five innings, walking three and striking out two. Scott (4-1) allowed only an unearned run in the third inning on two walks, an error and a bases-loaded hit batsman for Velasco, plating the run.

The Raptors' lone hits in the game were a leadoff single in the first inning by senior centerfielder Megan Goodspeed (Florence, NJ/Florence) and a one-out single in the fourth by junior third baseman/pitcher Gabby Pfeiffer (Mount Holly, NJ/Rancocas Valley).

WASHINGTON, D.C. (March 30, 2017) – The Rutgers University-Camden softball team made the long trip to the nation's capital, but the Scarlet Raptors' offense took a detour here Thursday.