year-old GAF power plant at the intersection of Charles and Water Streets has begun. The plant was the main source of power for the industrial complex that was once located in that area, now known as Southport. Companies such as Ruberoid (GAF), Hinde and Daugh Paper Mill,  Harshaw Chemical (Amspec), Atlantic Richfield, and NJ Zinc (Gulf and Western) were fueled by that structure.

*GI Holdings, the parent company of GAF is the owner of the property. The subcontractor involved with the demolitions of the building is the Mack Group, Cherry Hill. 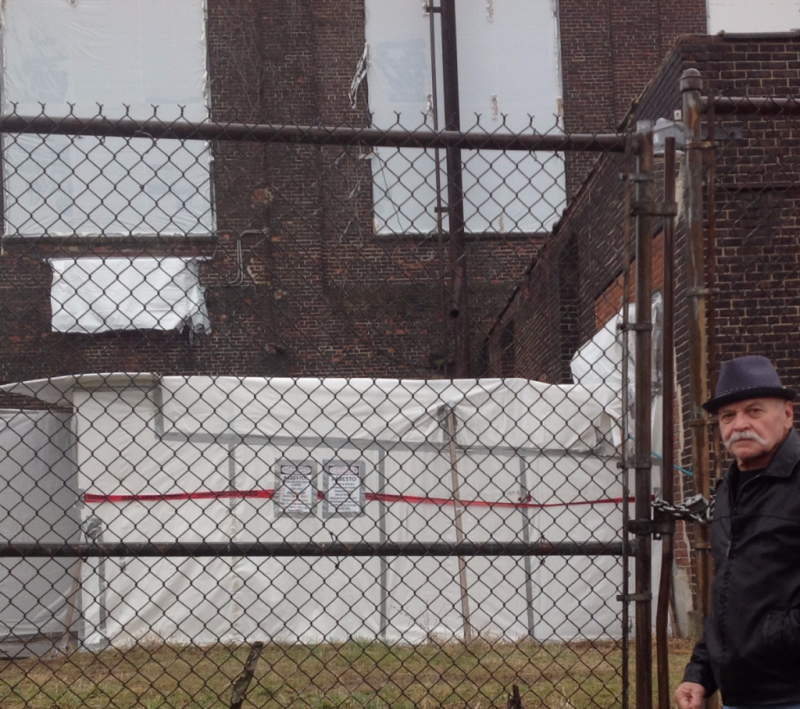 Bob Kotter was concerned about the asbestos fibers from the power plant cleanup blowing into the nearby neighborhoods. As a result of his tip, we discovered some interesting history about the GAF power plant (CNBNews photo0

Bob Kotter, a local environmental activist, contacted CNBNews last week as he was concerned about the eradication of the asbestos. Kotter said some of the plastic covering the windows on the building were torn.

“Because the windows are not properly sealed I am worried that the asbestos being removed inside the building could be released into the air and contaminate the surrounding neighborhoods. I have walked by the building and found the plastic blowing away from some of the windows on a windy day. I have also noticed the workers dressed in white suits throwing material off the roof of the building into the dumpster below. If that material is asbestos it only takes a few fibers to contaminate the nearby neighborhoods. If it isn’t hazardous why are the workers on the roof covered from head to toe in those suits?”

CNBNews spoke with Raymond Merrell, Environmental Compliance Manager of GI Holdings in Parsippany NJ. He is the project manager for this job.

Merrell said the asbestos removal inside the building was completed before the holidays. ”As for the workers on the roof they had to remove a three-foot parapet wall that was blocking the chute that led to the dumpster below. The material that was being thrown off the roof came from that wall. Once that was removed they were able to connect the chute. They also removed roof mastic, a tar-like substance. Roof mastic is a roofing product used to seal a roof and make it waterproof. It contained some asbestos but it was non-friable. Asbestos is friable, meaning it crumbles when touched. The workers were wearing those suits just as an added protection.”

Asked if Gloucester City has approached GI Holdings about purchasing the property Merrell said, “The city said they would be willing to talk once the property was cleared. GI Holdings is interested in selling. We are not in the real estate business. We would like to see the ground developed.”

Merrell said he was a history buff. “We were able to determine from stuff we found inside the plant that it was constructed sometime in 1906-07. We found too some information about the Pusey and Jones industrial complex that was located in this area in the early 1900's. They built ships for World War I.  Their Gloucester City operation was closed after the war. The ground and buildings were auctioned off in 1924.”

According to Wikipedia, the company began in 1848, when Joshua L. Pusey and John Jones formed a partnership in Wilmington, Delaware, to run a machine shop in space rented from a whaling company. The shipyard sat between the Christina River and the main line of the Pennsylvania Railroad.  During World War I, Pusey and Jones grew to more than 2,000 employees. A second shipyard was added in Gloucester City, NJ, which was initially called Pennsylvania Shipbuilding Company but was soon changed to Pusey & Jones. After producing 19 ships, the name was changed to New Jersey Shipbuilding Company. The yard was closed after the war.

Merrell said papers from the 1924 auction of the Pusey and Jones property were found inside the power plant (see images below).

According to Merrell, he anticipated the demolition of the building will be completed in May or earlier June. 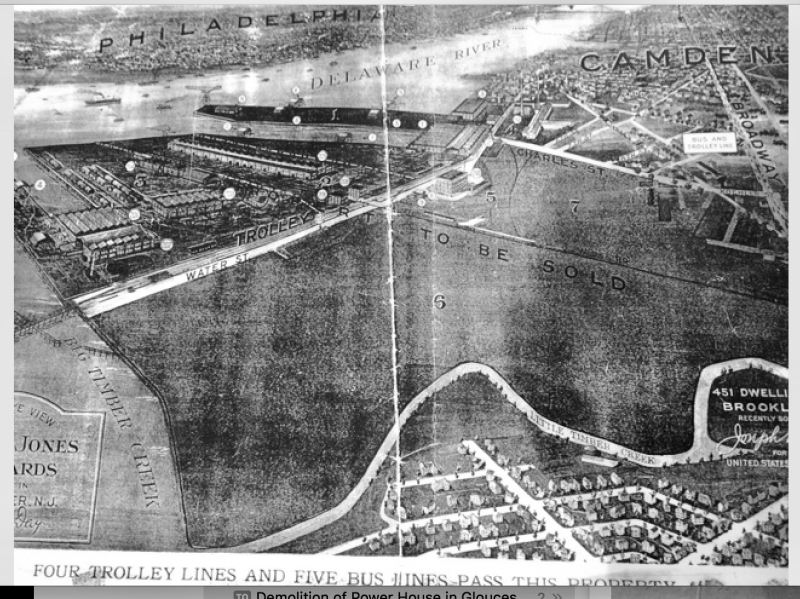 The caption below the image above reads: Four trolley lines and five bus lines pass through the property each day (image provided by GI Holdings) 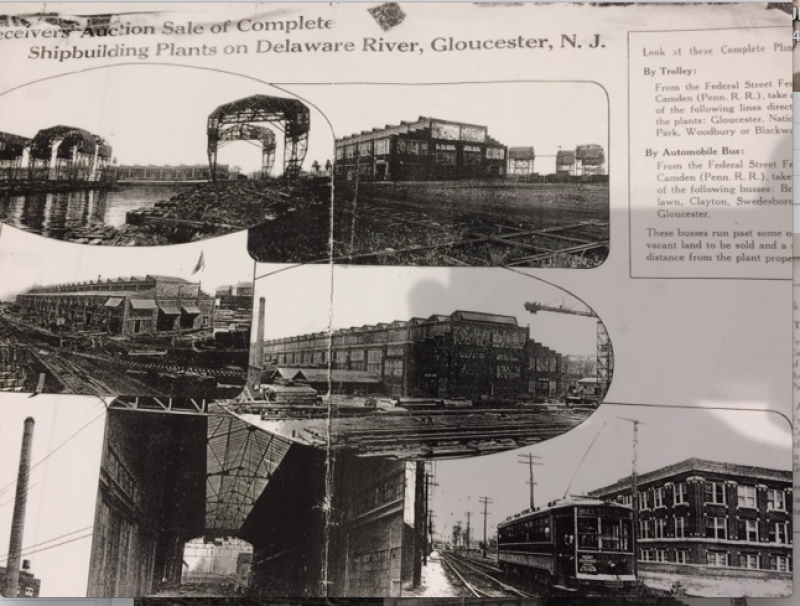 The advertisement announcing the auction of the Pusey and Jones site contained photos of just some of the buildings on that 179-acre plot.  (image provided by GI Holdings) 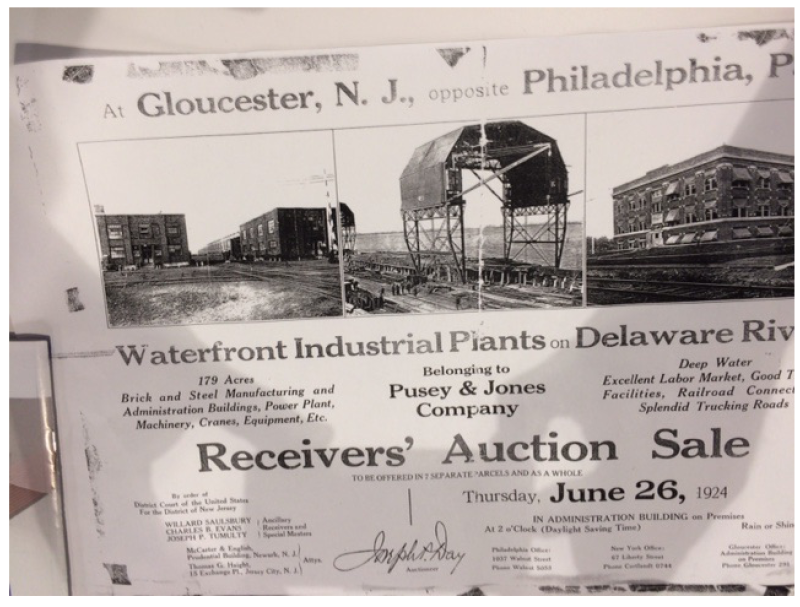 *In 1968 Ruberoid changed its name to GAF Corporation. Until 1981, the company produced and distributed numerous asbestos-containing products under the GAF, Ruberoid and other brand names including boards, cloths, shingles, siding, cement, pipe covering and even raw asbestos fiber product. By the late 1980s, the company was diversified into three divisions dealing with chemicals, building materials, and broadcasting.

The GAF Materials Corporation was the division that produced roofing materials and construction supplies, continuing the Ruberoid brand. This division also owned and operated an asbestos mine in Virginia until 1975. The mine and the corporation's numerous asbestos-containing building materials products precipitated the lawsuits which forced the company to file bankruptcy in 2001.

As a result of corporate restructuring, the parent company, GI Holdings, has established a trust to address all asbestos-related claims while the GAF Materials Corporation continues to operate as the largest roofing manufacturer in North America. See more

HAVE A TIP?  Send it to CNBNews1@gmail.com

year-old GAF power plant at the intersection of Charles and Water Streets has begun. The plant was the main source of power for the industrial complex that was once located in that area, now known as Southport. Companies such as Ruberoid (GAF), Hinde and Daugh Paper Mill,  Harshaw Chemical (Amspec), Atlantic Richfield, and NJ Zinc (Gulf and Western) were fueled by that structure.

*GI Holdings, the parent company of GAF is the owner of the property. The subcontractor involved with the demolitions of the building is the Mack Group, Cherry Hill.