Taxpayers for Common Sense: Building a Wall of Waste 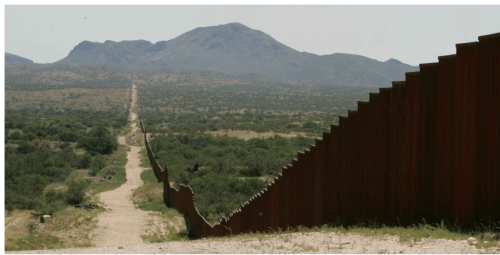 the U.S./Mexico border. The work on the wall is slated to begin within months.

President Trump's new order relies on the authorities under the Secure Fence Act which was signed into law by President George W. Bush in October of 2006. As we wrote at the time:

“In addition tothe project’s staggering cost, there are certainly significant questions about how effective a strategy it is to build a wall to seal the borders. Arizona Governor Janet Napolitano (D) sums it up: ‘Show me a 50-foot wall and I'll show you a 51-foot ladder.’ Aside from questions about whether a wall will keep people out, there are obstacles to getting it built in the first place.  Veteran border agents who know these areas better than anyone point to several challenges—rugged desert, creek beds prone to flash flooding, and difficult mountainous terrain—that will make any wall extremely difficult, if not downright impossible, to construct.”

Nothing has changed about the terrain this wall needs to traverse and secure. The only thing that has changed in the last 10+ years is the likely cost of constructing a border barrier. And the estimates of those costs have only gone up. According to a study conducted by the Government Accountability Office in 2009, one mile of fencing (not a wall) runs from $2.8 million to $3.9 million per mile. Our border with Mexico runs close to 2000 miles. So using an average per mile price for fencing of $3.4 million, the cost of just a fence would run in the neighborhood of $6.7 billion. (We’ve already paid $2.4 billion for the more than 650 miles of fencing already built in compliance with the Secure Fence Act of 2006.)

Again, these costs were for a fence and not a wall. Early last year the Washington Post asked experts to come up with estimates for a concrete wall. Their estimated price tag: $20-25 billion. The numbers make your head spin, precisely because there are so many variables in what “securing the border” really means.

A wall may be more successful at blocking illegal crossings than a fence but, like then-Governor Napolitano said about that 51-foot ladder, a physical barrier will not be enough to do this job. Enter the need for increased surveillance capabilities and then the price really ratchets up.

Back in 2013 the Senate added an outdated Border Patrol wish list to immigration reform legislation that spelled out in highly specific detail the kind of technology they would like to have in each sector along the border. At TCS we tried to run down the cost of each of the hardware programs listed and came up with an estimated $12 billion in additional costs. Our estimate may have some holes in it; for instance the model of the helicopter the Border Patrol wants to buy is no longer being built. But based on our years of experience looking at the federal acquisition process, we can confidently state the price of all that high-tech, whiz-bang equipment isn’t coming down.

Added to the confusion of what a border wall that runs almost 2000 miles will cost is the additional assertion that the government of Mexico will ultimately reimburse the United States for the cost. According to the Washington Post the President had this to say: “We’ll be reimbursed at a later date from whatever transaction we make from Mexico,…I’m just telling you there will be a payment. It will be in a form, perhaps a complicated form.”

We’ve been around the block enough to know that taxpayers have to watch their wallet anytime you hear an elected official promising future reimbursement for spending today. Coincidentally, the President of Mexico, Enrique Peña Nieto, has insisted they will not pay for the wall and cancelled his meeting with the President to underscore his point. People have speculated at other ways to make Mexico pay such as cutting off their foreign assistance. The U.S. was only planning on spending $135 million in Mexico for fiscal year 2017. At that rate it will be a long time before the wall is paid for. Another thought is the tariff the President has been proposing. Besides the violation of trade agreements, this view ignores that money is fungible and the revenue could be spent on other things more economically beneficial than the wall or even (gasp) reduce the deficit.

In the meantime, add up a wall that is estimated to cost $20-25 billion and the surveillance technology to make it at all effective estimated at $12 billion, and you have a rough estimate of $32-37 billion.  In addition to the raw costs, we’ve criticized the various efforts to erect more physical barriers at the southern borders as wasteful for many reasons.  To start, a large portion of unauthorized immigrants arrive legally and overstay their visas, and another large percentage arrive through ports of entry without inspection.  The wall only addresses the portion of unauthorized immigrants, who enter between ports of entry undetected and manage to stay – and the Department of Homeland Security has stepped up interdictions and apprehensions of that portion of illegal crossings.

So even leaving aside the speculative idea that Mexico will pay us back, putting this expensive wasteful wall on the U.S. credit card not only doesn’t make sense, it’s nuts.

Taxpayers for Common Sense: Building a Wall of Waste

the U.S./Mexico border. The work on the wall is slated to begin within months.

President Trump's new order relies on the authorities under the Secure Fence Act which was signed into law by President George W. Bush in October of 2006. As we wrote at the time: