EDITORIAL : The Proof is in the Numbers

“The time has come, ladies and gentlemen, to stand up to “the machine,” of a select group of people, who have controlled your lives for far too long. The time has come to “hold the high ground” and stop the decline, to “fight the good fight,” and to give Gloucester City government back to the people.”  (see article)

Ten years have passed since the James administration took over the 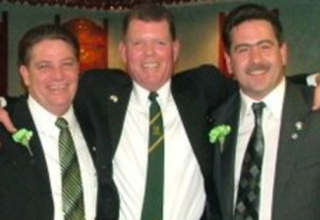 management of Gloucester City. We can still remember how much enthusiasm people felt after Mayor Bill James, and councilmen Jay Brophy and Nick Marchese were sworn into office on January  4, 2007.

Finally, the voters had people who said they were going to run the city differently than those “Professional Politicians” that ruled the community for so long. They told us they owed no allegiance to any political machine. They said they wouldn’t rubber stamp every ordinance/resolution that comes up just because the “Party Boss” says this is what you must do.

Soon after they took office that pledge was forgotten.

One has to wonder is Gloucester City any better off since January 4, 2007.

In fact, it is worst.

The proof is in the numbers

Under the James administration, your local purpose tax has mushroomed every year since they have been in charge. In 2016 your taxes were increased by 10.8 percent according to a report by NJ1015. That number placed Gloucester City in the top 10 communities with the highest tax surge. Out of 565 communities in this state Gloucester City had the third highest increase. Coming in number one, was the borough of Audubon Park with an increase of 14 percent.

The proof is in the numbers

Here are some reasons why taxes in Gloucester City have spiraled out of control year after year, after year under this mayor and council and school superintendent and board of education.

Despite spending over $5 million in 2007 to purchase the Chatham Square apartments the property remains undeveloped. The tax ratables lost on that property is estimated to be in the millions of dollars. Even if the city is able to find a developer those ratables are gone forever. The Chatham Square boondoggle has cost local residents $10 million plus. Until the property is sold that number will continue to skyrocket.

Some people unable to sell their home are walking away from it. The last figure given for the number of abandon homes was 400.

Taxpayers spent $5 million to purchase the AMSPEC Chemical property on Water Street. Years later that ground along with the Gulf and Western property, the GAF property, the Atlantic Richfield property are still vacant.   Since the 1980’s the Democrats have promised to develop the city’s waterfront. James made the same promise 10 years ago.

Despite taxpayers spending close to $1 million on the Freedom Pier infrastructure, the ground remains empty.  James made another promise this year in his state of the city address that talks have begun with a new developer for the property. What happened with the Otts on the Waterfront? The city has never released a public statement about that failure. 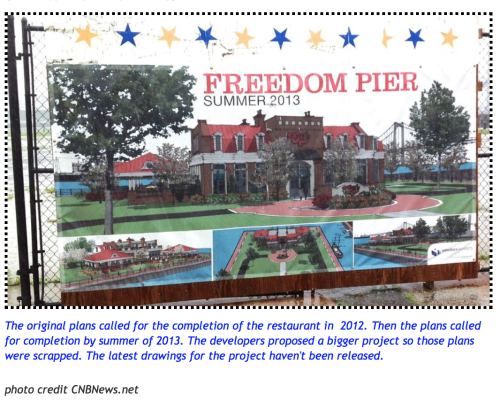 Related: What's Up With Ott's

The two biggest employers of local residents are public entities, the city with close to 200 employees and the school district with nearly 400 employees.

The proof is in the numbers!

Tearing down entire neighborhoods under the eminent domain rule to build new schools is also a drain on the local tax base.  For example, the state/city demolished 78 homes under the eminent domain rule to make room for the new middle school. The estimated loss in tax ratables, $3 million. Likewise, millions of dollars in ratables were lost with the demolition of the Hughes Avenue apartments in the 1990's for the Cold Spring School construction.

The $87 million middle school, which is expected to open in September 2017, will cost taxpayers and extra $500,000 annually to just maintain it, according to Board member William Johnson. In 2015 faced with a $5 million deficit Johnson said, “For the last three or four years the amount of money the district receives from the state has remained flat, at $30 million. Because we are a *Abbott District, the state mandates certain programs. Some of the programs they fund, but there are others that we are required to keep that they don’t fund. That is one of the reasons we are facing a deficit.”

Johnson said he was concerned about future deficits and mentioned the operating costs for the new Middle School.

“We have been told several times by Facilities Director John Kenney to expect it to cost approximately $500,000 annually to maintain it. We have such a large deficit now how will we pay an additional $500,000 in the future? ”

The factors mention above are just some of the reason why residents of Gloucester City can expect their taxes to continue to rise again this year and every year thereafter. Consider too that many of these council and school members haven’t clue on how to manage million dollar budgets. They nod their heads and go along with whatever they are told to do.  They are in over their head. The answer to their out of control spending in the past, and in the future, raise your taxes. You can expect that to continue.

The proof is in the numbers!

HAVE A TIP?  Send it to CNBNews1@gmail.com

EDITORIAL : The Proof is in the Numbers